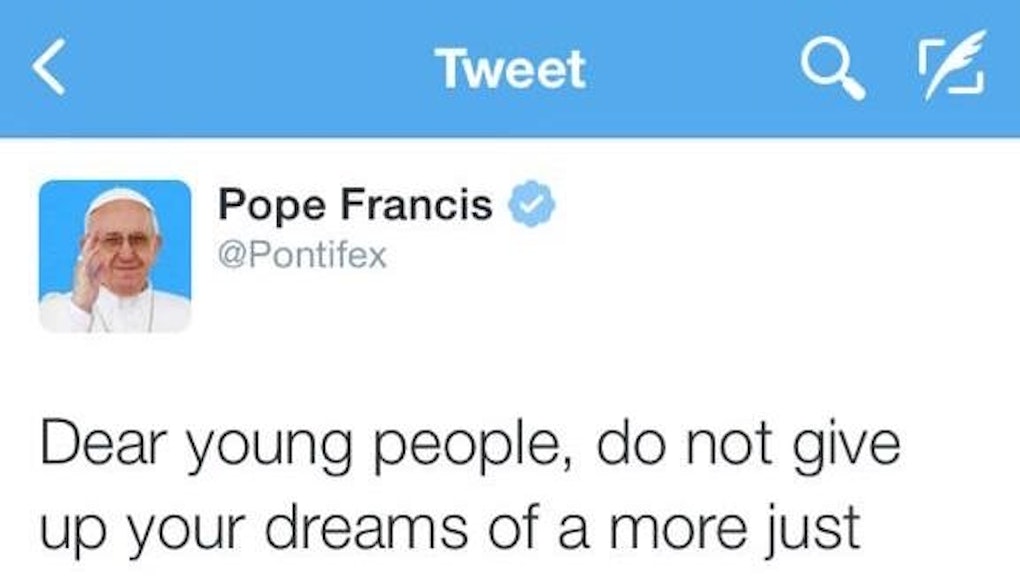 Which of These Awful Things Is Literally the Worst? Help Us Decide

Just in time for the March Madness tip-off, Mic presents the Great Scourge of 2015, the 64 people, things and ideas that deserve some healthy, gentle mocking. The biggest menaces of them all, of course, are people who think their clever fake tournament brackets are funny. But here we are.

Click to zoom in on the bracket and follow along as we break it all down for you below.

The winners of each match-up are bolded below ...

First seed first, I-G-G-Y dominates this battle of cultural appropriators. Macklemore would have won the whole tournament in 2014 for his Grammys mass-marriage stunt alone, but this year he seems to have heeded public calls to mackle less. Igloo Australia advances on the strength of her infamous Twitter beefs and a startling lack of self-awareness.

Far from being able to legislate lady parts, the most harmful thing O'Reilly has done down there is confuse a loofah with a falafel. House Republicans, however, are this close to making women attend a full-day Benghazi subcommittee hearing before they're legally allowed to make their own decisions on whether to terminate a pregnancy.

The latter set of anti-science folk may help push Disneyland into the sea eventually, but it's the former who are putting everyone who goes to Disneyland at risk right now. Climate change deniers are hindering solutions to current and future problems; anti-vaxxers are somehow succeeding in fucking up the past, helping bring back a disease that was literally eradicated in the United States 15 years ago.

An early upset in the match-up of morally bankrupt billionaires. The Donald is a 140-character birther clown, but at least his influence is mostly limited to tawdry TV and gaudy architecture. Murdoch's skewed worldview, as evidenced by his post-Charlie Hebdo anti-Muslim bon mot, seeps into newspapers, books, magazines, TV and radio shows seen and read all over the world.

Canada's two worst exports meet head-to-head in Round 1. Nickelback's bland brand of post-grunge nothingness is little more than a harmless punchline created by a soulless corporate machine. Bieber's a house-egging, bucket-pissing, drag-racing, dong-Photoshopping brat whom 274,000-plus people want deported from the United States.

At least you'll have to seek out the bro-y douchiness of Entourage in theaters. U2, on the other hand, came to you and conquered your phone. And whereas you know Entourage will have a happy, conflict-free ending, you really never know when U2's aging ubiquity will ever end.

Rice is a dude who did a very bad thing and is currently facing career-ending consequences. Goodell is a dude who has done many bad things and made $44.2 million in total compensation last year. That number is enough to make your head hurt (a problem that Goodell will likely ignore for years).

Being a long-rumored closet homosexual who spawned nearly three dozen wickedly tired memes involving Idina Menzel is not in the same ballpark, league or sport as being a closet serial rapist whom nearly three dozen women have publicly accused of sexual assault. Cosby's recent silk pajama apology video really resonated with people who have been in comas since at least September.

Manspreading is mostly an urban public transportation problem, a clever portmanteau more than anything else. Mansplaining, though, is an international epidemic that serves as an allegory for thousands of years worth of "Hey girl, do you need me to go slower and break it all down for you?"

It's always refreshing to see white teens given new platforms to express themselves. But flaunting wealth with garish pics on Instagram is nothing special. Accumulating gobs of #brand wealth six seconds at a time, however, by stealing other people's jokes and/or looking half-decent shirtless is America's hippest pastime. Do it for the [sponsored] Vine!

It's the matchup of two groups who just never know when to shut up. But whereas hippies for a week will bore you to death with Had to Be There stories, the real prize lies with those who make uncomfortable women wish they were Anywhere but There.

Street harassment disguised as funny pick-up lines recorded and uploaded for subscriber gain is a modern plague. But that the comments section of any YouTube video is still somehow a safe haven for mouthbreathers makes you wonder whether Internet access should require corporate sensitivity training.

Every now and then, scores of men who coalesce around the same two or three Greek letters take time out of their busy schedule of homoeroticism and roofie purchases to break out the greatest hits, like unabashed racism. Adult males who worship a faux philosophy dedicated to the self are no match for one that rewards the worst aspects of groupthink.

There is literally nothing sexier to women than someone who thinks, "You know who needs a louder voice in the world? Men." It's easy to mock these jokers into obscurity until you remember Elliot Rodger decided to kill six people in a bid for perceived revenge.

2. GamerGate vs. 15. South by Southwest panelists

Because pretending you have any idea what the future of journalism looks like is far less embarrassing and hurtful than pretending the harassment of women is actually about ethics in gaming journalism.

Spreading misinformation about Blossom or Zack Morris dying in a fiery car wreck is low-level trolling. Spreading photos of naked exes is the pinnacle of being a terrible human. Let's all return to the era of simply saying "she had bodacious tatas" instead of this criminal show-and-tell.

An unscientific poll that doesn't exist shows that 97% of Americans dislike a cappella groups, while the other 3% are in a cappella groups. But people are still replying "First!" to things, in 2015, which seems unnecessary. If you want to be on record as being an early replier, do it as a Heartbreaking Work of Staggering Thirst. Like this:

Sure, there's a natural frustration that comes with 15-second ads before a 12-second vertical video, but someone's got to pay them bills. Flash mobs, lip dubs, fake movie trailers, Jumbotron embarrassment — c'mon, people, propose to your significant other the old-fashioned way, like begging them through tears as they are packing their things.

There's something incredibly off-putting about the 140-character Make It About Me obituaries that follow the death of a famous person. But this is what you look like when you join a Twitter mob (spoiler: You're Martin).

Screw it, going contrarian: Selfie sticks are a genius invention, no different than the first guy with a super-hairy back who taped his electric razor to a broomstick. Google Glass is one of the biggest flops in tech history that will be obsolete when Black Mirror's "The Entire History of You" becomes a reality in a couple years.

Every scrap of news comes with its very own overwrought take, whether it's about the Islamic State group or Super Bowls or a throwaway comment from the fifth lead on a mediocre cable show. But what the hell else are we gonna read all day to distract us from all the nontroversies and quasi-scandals immediately labeled SomethingGate by a lazy columnist in a wrinkled coffee-stained shirt?

Can this end in a tie? A double loss? Throw your phone and your piping hot takes about your phone in the nearest body of water. Then remind yourself that people exist IRL and go talk to them. (Just kidding, people are garbage too.)

2. Ducking Autocorrect vs. 15. The Phrase "Said No One Ever"

No one means to say "ducking," said everyone ever.

When you think charging four times the regular price to ferry people out of an area with an ongoing terror threat and hostage crisis, no silly facial hair logo of a competitor can challenge you. In the end, remember that Uber is a convenience, which makes it a vulnerably weak No. 1 seed down the line.

Wall Street bonuses are at their highest on average since 2007, otherwise known as that time right before the global financial crisis. Maybe it's time to fire up the Glenn Beck greatest hits and buy gold.

George Carlin joked, "Sigmund Freud said 'Sometimes a cigar is just a cigar.' Oh, yeah? Well, sometimes it's a big, brown dick, with a fat, arrogant, white-collar business criminal asshole sucking on the wet end of it." Big Vape is infringing on this market with breakneck speed. Tobacco kills, but hey, at least you don't look like a schmuck on wheels.

Seriously, CVS, it's just a pack of Juicy Fruit, you don't need to print out something that uses more paper than a George R.R. Martin book. But try as we might to shame them, on fleek #brand tweets never quit:

The Department of Motor Vehicles might be the cliched example of hell on Earth, but the world's soccer governing body decided to create the actual hell on Earth in Qatar, featuring 1.5 million migrant workers "imported" for the building of stadia ahead of the 2022 World Cup, and an official report that estimates 4,000 workers will die before it begins. FIFA seems to have done it all for a good cause, though: suitcases full of oil money.

The golden arches' appetite for profits seems to be built on a labor house of cards, but in the fast food space, it's tough to top the anti-gay agenda of that goddamn chicken sandwich. The sheer number of LGBT who fall to their knees and pray to the altar of Chick-fil-A tells you everything you need to know about the true deliciousness of its offerings.

Ever deal with Time Warner? They win, skip to the next one.

It's weird to think that the NCAA can even be in this competition, considering John Oliver destroyed it on Sunday. Apologies to the Corinthian 15.

In the interest of time, we jumped ahead several rounds and filled in the Final Four. Zoom in below for what the bracket looks like after five rounds of competition. Then scroll down to vote in our one-click poll to determine which person or thing should be crowned the Great Scourge of 2015.

Now join Luther Vandross for an exciting rendition of "One Shining Moment."