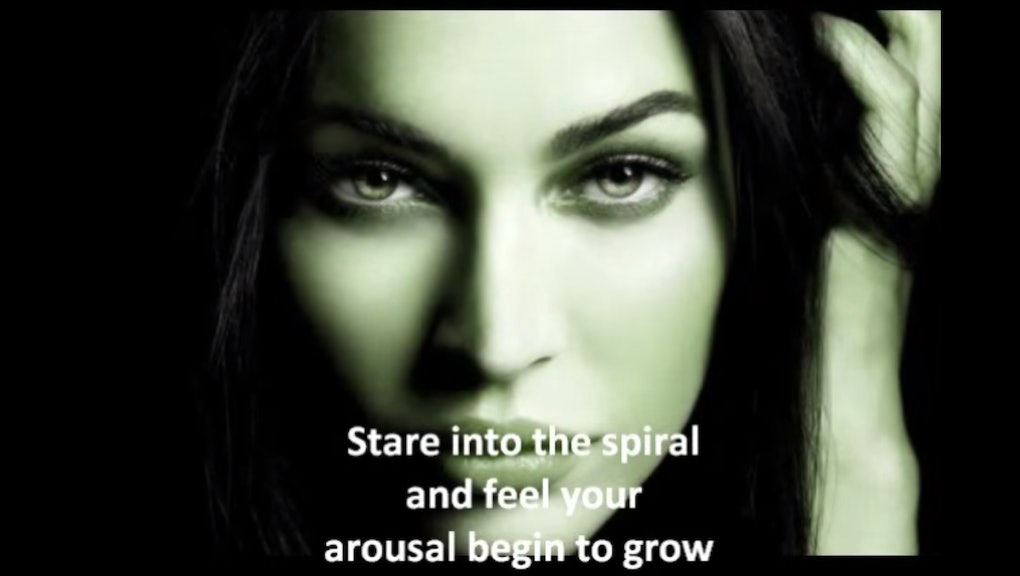 She's telling you to feel her voice "pouring over your mind." Feel a "pulsating heat" that starts at your crotch and streams through the rest of your body, she says. It's in your stomach, legs, toes, arms, fingertips and finally your chest. It grows stronger with every breath. She wants you to imagine "looking deeply into the eyes of someone whom you desire above all else. Look into their eyes, taste their scent, feel the feather-like brush of their skin against yours."

Full of trippy rotating spirals, titillating photos, written instructions and authoritative narrators, the videos dangle the promise of sexual gratification in front of hungry viewers — and viewers eat it up.

"The subconscious mind is capable of directing your emotional, physical and sexual functions," the narrator explains. "And right now, the best thing for you to do — to get as [much] pleasure as possible out of this recording — is to allow me to direct your subconscious mind."

The comment sections are filled with effusive praise. "When she said the vampire was biting me, I acculy [sic] felt a little 'shock' through my neck," marveled one viewer after watching the vampire seductress. "That felt sooooo good oh my god I loved it I wanted more," reported a different viewer. "Well, it worked. ... Made a mess," offered another.

The YouTube community, however, takes more of a grassroots approach. Free to watch, the videos are made by users who offer a broad range of samplings. Lisa West's videos, for example, tend to veer toward the bizarre end of the spectrum; many of her videos mention cats, and her comment sections are full of people saying "meow." Jacqueline Powers opts for a more streamlined and orderly approach to her content; almost all of it uses the same bright pink spiral, and her body of work is organized by category. Still other accounts are helmed by identity-less operators and go by vague usernames like "Hypno Videos" and "hypnoplay."

While each video differs in content, each is explicitly sexual. Yet these are not your typical naughty videos; there's a noticeable lack of graphic material, and they rely on sounds and the spoken word rather than nudity and smut. They want to get you to your special place using the power of your own mind — an especially difficult task when the only thing goading you along is a flight-attendant-esque voice coming from your speakers, urging you to breathe deeply and let go of your inhibitions.

Some users, however, manage to get the most out of it. A few of the more popular accounts, like Lisa West and Jacqueline Powers — who have over 2,000 and over 25,000 subscribers, respectively — appear to have relationships with their commenters fueled by power dynamics. Many commenters refer to the women as their mistresses ("Yes, mistress. The Walken obeys you"; "Mistress I want to be your empty vessel. However, can I please touch. that was so hard not to do"), while others continually compliment the hypnotists on their craft.

As one commenter put it, "It does work, though as with all hypnosis it may take time and repeated listening for it to do so and may require experimentation with a few different sessions to find the one that pushes your buttons."

According to one client of a hypnodomme, the scene attracts fans who are seeking new thrills and don't mind a challenge.

"This scene is not for everybody," the client told Vice in March. "You have to train and practice in order to achieve something. Some people are more suggestible than others and experience trance differently. Through training and repetition, you will probably reach your goals, but if you go into the adventure half-hearted, your rewards might be limited."