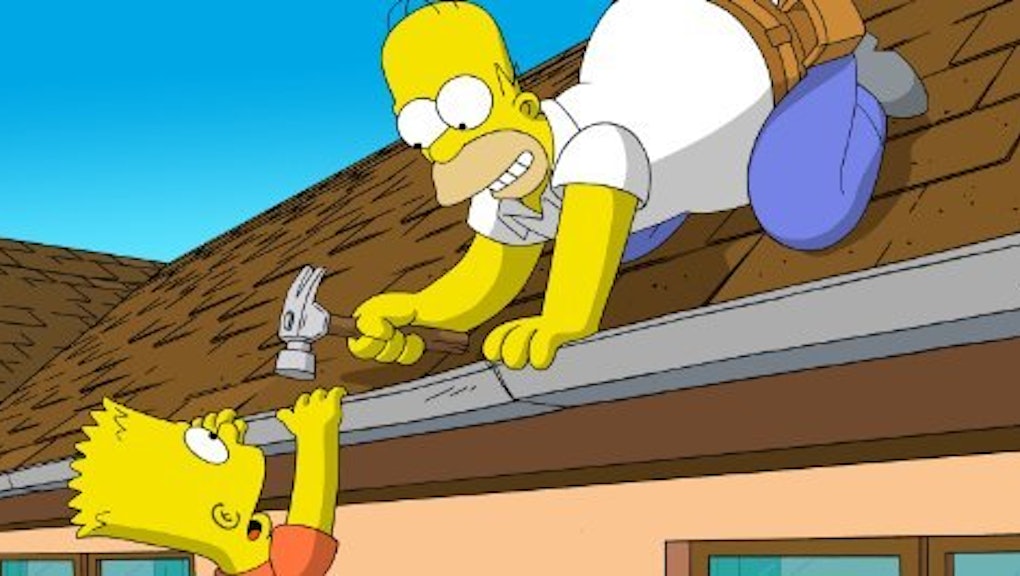 The 8 Most Dysfunctional Families in TV History

Wholesome Thanksgiving specials usually try to teach us that turkey time is best observed when a family behaves like the Cosbys or the Bradys. But as classic as those shows are, they're about peaceful families and as such don't quite capture something very crucial to a great Thanksgiving: the drama that only chaos and dysfunction can bring.

So, for all your sadistic, self-serving needs this holiday season, here are the eight most dysfunctional families of all time.

The iconic image of Homer strangling Bart epitomizes the best thing about the Simpson family: they don't get along. Marge's artistic aspirations are repeatedly destroyed by her family's insistence on keeping her busy with random household issues, like putting out curtain fires. Lisa's tree-hugging ways are given as much respect by her closest relatives as a meal at Krusty Burger. Bart has been abused so many times that his throat must have internal damage. And Homer… well, he's at Moe's right now.

Couple all that with a baby who shot the city's economic lifeline, and the best thing the Simpsons can do for their loved ones is what they've done to Abe: throw them out to fend for themselves.

Carl and Harriette Winslow lead a fairly standard life. They go to work, provide support for a loving family, and come home each day to raise their kids Eddie, Laura, and Judy (don't remember this one? Trust me, there's a sob story there). The problems their children face range from the predictable — like fear of dances going awry — to the touching — like finding racial slurs spray-painted onto school lockers. But what really changed the show in both tone and pop culture status was the entrance of neighbor Steve Urkel.

Suddenly, a nerdy klutz next door became the show's focal point and transformed into a cultural icon, destroying the peace (and furniture) of the Winslow house in the process.

No other show defines the nineties quite like the Fresh Prince of Bel-Air, arguably Will Smith's most unforgettable contribution to modern society. When a young kid born and raised in west Philadelphia moves with his aunty and uncle in Bel-Air, there's bound to be some kind of friction.

And when that friction means having to constantly "escort" your nephew's sleazy friend off the premises, trying to survive his blunders during a visit to Oprah, and forcing him to make something of himself, the otherwise functional family starts to get a little frazzled. Luckily, they have a butler to keep things calm, though his competence matched only by his indifference.

As always, celebrate by doing the Carlton.

Who would have thought that issues surrounding household gender roles could be so beautifully discussed in a sitcom? This Tony Danza classic shows that a stay-at-home man living with a woman he isn't married to is perfectly capable of becoming a character that both men and women the world over can embrace.

Danza has to deal with a psychotic family that includes a troubled and bossy woman-of-the-house, a temperamental daughter who has lost her mother, a "mother-in-law" who behaves like a far younger woman than the '80s allowed, and a young boy whose mother is too busy with her career to pay him much attention. It's a recipe for disaster, and it created one of the most progressive, genre-bending family comedies of all time.

That's pretty much how all holiday cooking ends up.

Speaking of progressive, consider this: a household where two women living without any male figure (barring a talking cat) take in their niece Sabrina and raise her through her teenage years. The fact that all three women are witches adds to the drama, but the real lesson Sabrina teaches is that when two immature people take in a child, the result will never be anything less than chaotic.

A face every child has made at Christmas picture time.

Remember how Lisa Simpson's liberal environmentalist leanings are at odds with her family's views on the world? Multiply that struggle by 1,000 and you get the Keatons, whose children Alex and Justine — both reflections of conservatism under Ronald Reagan — are about as far from their liberal Woodstock parents as can be. Although these political differences lead to much drama in the Keaton's life, the message is clear: political preferences cannot, do not and should not cause a rift within families.

Even on Christmas, a true Reagan-ite dreams of kingly wealth.

If obnoxious neighbor Steve Urkel was enough to throw the relatively stable Winslows into disarray, just imagine what an alien could do to the unsuspecting and peaceful Tanners. In addition to being a masterful demonstration on the art of the puppetry, ALF is also proof that with enough love and patience, even the biggest stranger can start to feel like a part of the family. The Tanners come to realize that even a creature from space can perfectly become a part of their life.  Now, if only we could have that view on immigration.

...says the alien living in someone else's home, eating their food, and never working.

In the beginning of the series, Raymond's wife Deborah convinces him that there's nothing wrong with moving into a house across the street from his parents. She later claims that because she was pregnant at the time, there was no blood going to her brain and as such the move was Raymond's fault (by the way, that is the logic behind most marital arguments).

Whatever the reason, Ray Barone moves his wife and three children within constant reach of his parents and bitter, ridiculously tall brother. Between his mom's Italian cooking, his dad's tendency to yell out expletives, and his brother's rampant jealousy (over God knows what), there simply wasn't any problem Ray didn't have to deal with. And it was all just in the family.

Before anyone gets upset, I will admit that I left out Arrested Development, Shameless, and Supernatural simply to troll the niche fans. This is hardly a complete list and, shows like The Middle and Modern Family are keeping the tradition of dysfunctional onscreen families alive — so be sure to share your favorites in the comments below.