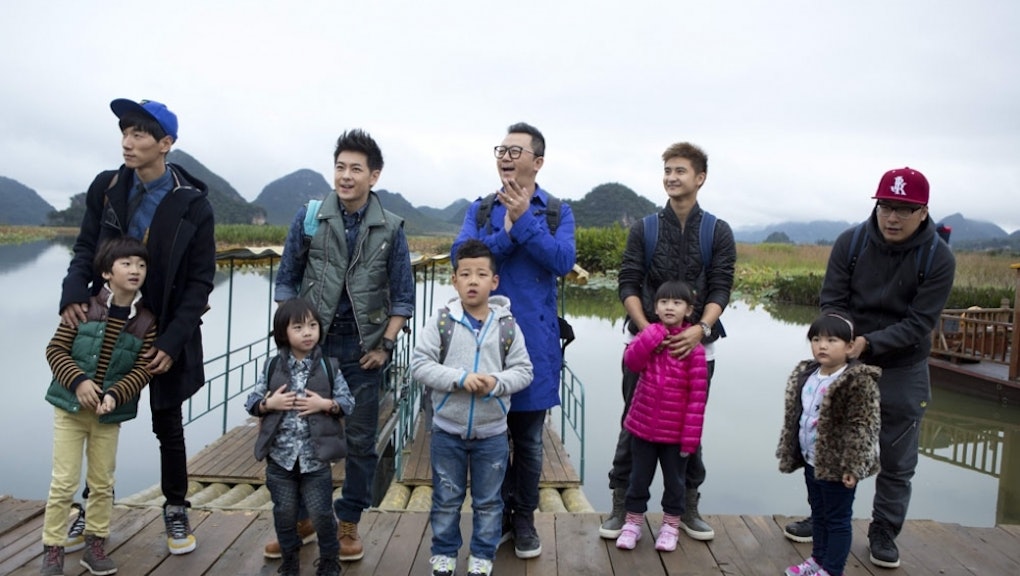 Why 600 Million People Are Watching This Chinese Reality Show

Imagine this: Jay Z, Michael Phelps, Alec Baldwin, Ben Affleck, and Justin Timberlake are stuck on an island together, with nothing but ... their kids. (Also imagine that they all have young children, aged 4-5.)

That's the premise for the new reality TV sensation taking China by storm: Where Are We Going, Dad?. The show is about fatherhood, and is not only the top Chinese TV show of 2013, but also is shining a brave (and wildly entertaining) new light on the modern Chinese family. More than 600 million viewers are tuning in each week.

Where Are We Going, Dad? takes five Chinese celebrities — a pop star, an actor, a director, a former Olympic diver, and a fashion model — and their young children on 72-hour excursions to idyllic countryside vacation destinations in China, where they "rough-it" in less-than-luxurious accommodations, and compete against each other through mini Survivor-esque tasks.

"Little Stone," son of actor Guo Tao, races to accomplish a task in the first episode.

The final episode of the first season airs on Friday, and a film based on the show is set to be released January 31. Perhaps due to the overwhelming success of the first season, celebrities who didn't make it on this round are already clamoring to be included in the second season.

Reality TV about fatherhood seems to be all the rage this year. Right here in America we have the A&E show Modern Dads, which follows a group of four dads who have taken over primary child-rearing responsibilities. But although Modern Dads premiered around the same time this year as Where Are We Going, Dad?, it has nothing on its Chinese counterpart, and has gained far less traction with the American viewing public. So what makes Where Are We Going, Dad? the most popular show right now — in the most populous nation in the world?

Well, it certainly doesn't hurt that the dads are famous.

And it's no setback that the kids are really damn cute.

Even if they cry a lot.

Former Olympic champion Tian Liang with his daughter Cindy, famous for her tantrums. The caption reads, "In the following 1 minute and 13 seconds ..."

And the show definitely has its fair share of family feel-good moments that'll make even the most cynical viewer say "aww ..."

Jimmy Lin, dressed up as an old man from Chinese mythology, with his son Kimi (who doesn't seem to see past his disguise).

But the real merit of Where Are We Going, Dad? is the window it provides into the modern Chinese family. The show's emphasis on fatherhood resonates with shifting gender dynamics in a country where many women work, but are often still expected to assume most household responsibilities. Seeing these celebrities struggle to be the best dads possible has facilitated a dynamic discussion of gender roles in China at large.

Model Zhang Liang in a photo shoot for 1626 with his son, Tiantian.

While the show does highlight the fathers' difficulties in the face of so much mommy-less time — only one of the five fathers can cook, and others struggle to assuage their childrens' crying or do basic things such as tying a ponytail — Where Are We Going, Dad? also illuminates how the focus of the Chinese family has shifted in recent years from the elders of the family to the children.

What it means to be a good dad — especially in the context of how to best take care of a child — is a relatively new question for Chinese families. For millennia, Confucian values emphasized the proper behavior of children towards parents. Thus for a long time the more natural question would have been, "What does it mean to be a good child?" While the show is ostensibly about parenting, its focus on the children reveals how, the child has become the new center of the Chinese family.

Unlike A&E's Modern Dads, where the "stars" of the show are the fathers while the children fade into the background, the stars of Where Are We Going, Dad? are, without a doubt, the kids. The directors and producers of the show have worked to convey each child's unique personality, and the kids are the ones with the fans. They all have strong internet followings; one's Weibo page (the Chinese equivalent to Twitter) has over 3 million followers. The celebrity fathers, on the other hand, fade into the background, as they bustle about behind their children in the same general cloud of anxiety about how to be good dads.

The child's move to the center of the Chinese family can be credited at least in part to the one-child policy, which has made almost all Chinese children only children. The typical Chinese child now has the undivided attention of both parents and two sets of grandparents. In an increasingly wealthy China, this also means that they frequently have access to more material comforts. Like the match-making show If You Are the One, which highlighted changing Chinese attitudes towards dating and marriage, Where Are We Going, Dad? shows how the family itself is undergoing a makeover.

And, of course, because it is meant to be appealing to kids, parents all over the country will naturally sit down to watch it, too.