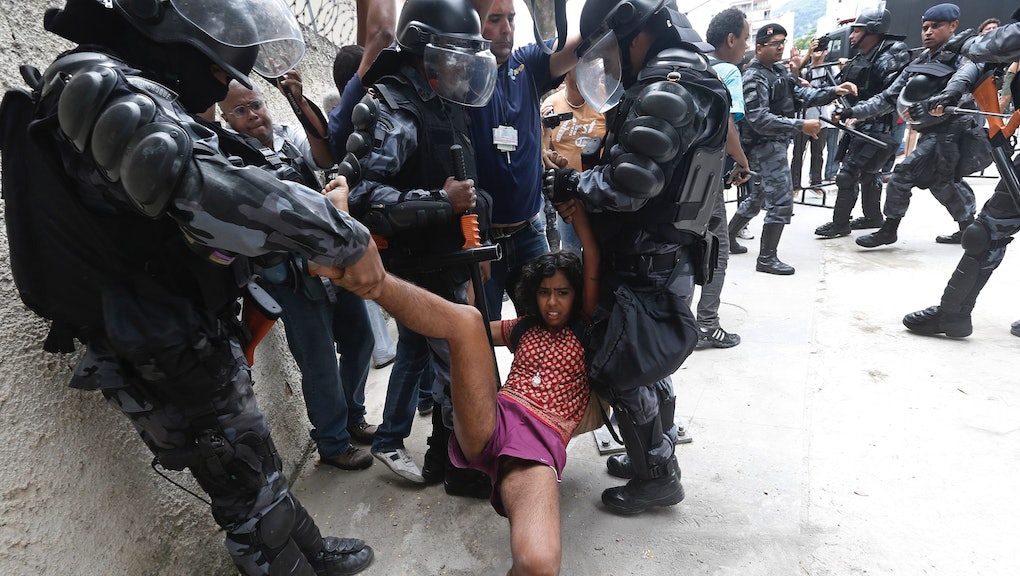 A five-hour killing spree last week left 12 men dead in Campinas, a city near São Paulo, Brazil. The killings were carried out with military-grade weaponry just hours after an off-duty cop was killed during an attempted robbery, leading many to believe that the massacre was an act of police revenge. Outraged by the abuse, 300 masked protesters set fire to several buses the next day.

The episode is illustrative of a common Brazilian narrative. Faced with high levels of crime, the police resort to brutality, typically extra-judicial killings or torture. But rather than quell the problem, the hard-line tactics spark retaliation, either by organized crime or citizens fed up with the country's endemic violence. Indeed, many view police repression as the principal cause of the ongoing unrest that has continued since massive protests swept the country last summer.

These six videos went viral in Brazil and each depict a different dimension of the country's struggle with the rule of law.

1. Police hit a moving plane with their car to prevent a contraband shipment

What was the ill-fated plane carrying? About $100,000 worth of cameras, laptops and printers.

Brazil's economic rise has made the country increasingly attractive for smugglers, but stemming the illegal flow of goods has proved no easy task for authorities. Brazil's land border stretches 10,000 miles across 10 countries, much of it through inhospitable jungle. Clandestine airstrips are littered throughout the immense territory.

In response, the government has invested billions of dollars to construct a "virtual fence" that employs satellite and drone technology to monitor drug and contraband shipments, as well as undocumented immigration from Brazil's poorer neighbors.

Responding to the death of the thief, a police spokesman said this case warranted lethal action since the boy had pointed his gun at the policeman.

According to Amnesty International, Brazil's police kill roughly 2,000 people a year. Though officially classified as "deaths following resistance," victims are routinely unarmed or have already surrendered. Under pressure by human rights groups, the police have reported a recent drop in extrajudicial killings in some areas. Yet observers are worried that officers have turned to "disappearing" suspects rather than reporting their deaths. For example, a bricklayer in Rio de Janeiro died as a result of police torture last year, after which authorities hid his corpse. Fifteen policemen were charged in the cover up.

In retaliation to this footage — which depicts prisoners being pepper sprayed, shot with rubber bullets, and subjected to anti-riot bombs — organized crime orchestrated nearly 100 related attacks across 30 cities in the state where the prison is located.

It is not uncommon for incarcerated gang members to direct operations outside their prisons' walls. Inmates often have access to cell phones and even laptops. In 2012, São Paulo witnessed a spate of police murders at the directive of jailed gang leaders. Such independence on the part of prisoners can foster, as the video brutally demonstrates, a situation that compels prison officials to exert their authority.

Though the video depicts one particularly gruesome episode, a total of nearly 60 people died in this prison last year due to gang rivalries. Despite an official capacity of 1,700, some 2,500 inmates live there.

Brazil's penitentiaries are notoriously overcrowded. Half a million people are currently serving time in Brazil, though its prisons only technically house 300,000. Overcrowding makes it exceedingly difficult for officials to prevent violence and abuse among prisoners.

5. Helicopter "lights up" a residential area

This aerial pursuit of a drug trafficker named the "Mathematician" peppered several houses and apartment buildings with bullets. The feed was captured by a high-tech camera capable of registering body heat.

Brazil invests heavily in technology to monitor its urban spaces. A centralized control center in Rio de Janeiro, for instance, employs hundreds of surveillance cameras and satellite images to watch for disturbances. Other advances are even more futuristic. Brazil's police forces have adopted "micro-cameras" that can be installed in uniforms, and have even tried eye glasses imported from Israel that can recognize known criminals' faces.

Though Brazil's large-scale protests last summer were initially sparked by a small hike in bus fares, it was police repression that fanned the flames and helped to ultimately draw over a million Brazilians to the street.

The latest form of social upheaval sweeping Brazil is the "rolezinho," involving thousands of teens that organize via Facebook to "stroll" through upscale shopping malls. These gatherings, predominated by lower-class youth, have roiled the country's elite. The kids do not steal or engage in any overt political protest, opting instead to run around the malls singing and dancing. But the official response has been heavy-handed. Police broke up one gathering with rubber bullets and tear gas, while other malls have successfully petitioned state security forces to prevent young people from entering if they look like they are there for a rolezinho.

Predictably, the crackdown has produced backlash. Barring entrance to malls based on appearance amounts to racial profiling, assert some civil society groups. The use of rubber bullets and pepper spray is "clearly excessive," according to an Amnesty International representative, "but sadly within the tradition of Brazil's security forces."

It's yet another episode of hard-line tactics sparking even greater unrest. It's time for a new response.