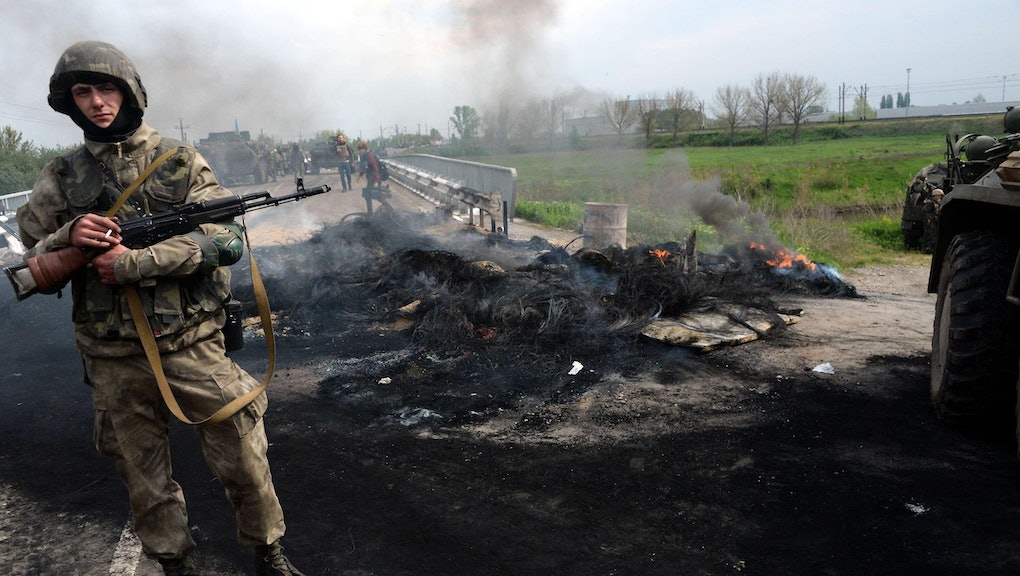 The 9 Most Viral Images You May Have Missed This Week

This stunning image was snapped on April 26 in Wroclaw, Poland, during a soccer game between Slask Wroclaw and Zaglebie Lubin. One rowdy fan decided to climb the fence with a burning flare, at which point security personnel decided to pepper-spray him. The pressurized propellant caught flame, and a photographer "captured the split second it all went to hell."

Luckily the guy was okay.

Video here (flame at around 1:40 in the lower left corner):

Pro-Russian insurgents defending the area around Slovyansk shot down two helicopters, killing a pilot and service member as Kiev sent troops on Friday to oust militants widely suspected of Kremlin ties. Simmering tensions escalated into all-out warfare in parts of the eastern Ukraine, and Ukrainian sources report that many on the pro-Russian side have been wounded or killed.

The Kremlin responded by saying the military actions "destroyed" the two-week-old Geneva agreement designed to draw down the crisis.

A major sinkhole opened up on East 26th Street in Baltimore on Wednesday, swallowing cars and shattering utility lines.

"The street caved in back in the '80s on the other side of the school. We knew this was going to cave in because you could see the cracks getting wider and wider," a local woman told CBS Baltimore. "Several neighbors have called the city over the past year; they patched it with blacktop. But over the winter, because of the snow, it just kept cracking. I got home at 3:30 and there were already several cars, about eight of them, settling into the ground."

J.J. Abrams has cast his new Star Wars film, and reactions about the cast are mixed. Vanity Fair praised the selection of "Adam Driver, Oscar Isaac, Andy Serkis and John Boyega," who will co-star with Harrison Ford, Carrie Fisher and Mark Hamill. But they were surprised to find that the only female newcomer was Daisy Ridley, while just two out of 11 principals were non-white.

They have a point. Samuel L. Jackson as Mace Windu was amazing.

Militants serving the Islamic State in Iraq and the ash-Sham (ISIS) insurgency crucified two people and executed five others they accused of being members of a cell they claimed carried out a grenade attack on one of their fighters.

"It's very dangerous. They threaten us directly and want to kill us," a man who identified himself as Abu Ibrahim Alrquaoui of the group Raqqa is Being Slaughtered Silently told FOX News. ISIS wants "to stay in control. Everything they do is to scare people. That's why they kill people publicly."

Iraqi Prime Minister Nouri al-Maliki casts his vote in Baghdad's heavily fortified Green Zone as 12 million Iraqis went to the polls in the first election since U.S. forces withdrew in 2011. But even as Iraqis remain eager to practice democracy (with turnout over 58%), more than 750 were killed by political violence in April, and the country seems to be sliding into civil war.

FC Barcelona player Daniel Alves was about to launch a corner kick during an April 27 game against Villareal when someone lobbed a banana at him — a clear racial taunt. But instead of ignoring the slight, Alves simply picked up the fruit and ate it.

"I don't know who threw the banana but I want to thank him," Alves quipped after the match. "It gave me the energy to put two more crosses in for our goals."

These fans called out longtime L.A. Clippers owner Donald Sterling for being notoriously "super racist." Earlier this month an audio recording caught him cussing out his part-black, part-Mexican girlfriend V. Stiviano earlier in April for posing with Magic Johnson for an Instagram photo because the latter happens to be black. Among the most racist quotes caught by TMZ on tape:

"It bothers me a lot that you want to broadcast that you're associating with black people. Do you have to?" (3:30)

"You can sleep with [black people]. You can bring them in, you can do whatever you want. The little I ask you is not to promote it on that ... and not to bring them to my games." (5:15)

"I'm just saying, in your lousy fucking Instagrams, you don't have to have yourself with, walking with black people." (7:45)

This photo provided by James Bryant shows Sunday's tornado carnage in Mayflower, Ark., where a half-mile-wide twister devastated the local community. Eighteen people were killed by three separate tornadoes in Arkansas and Oklahoma, and much of the rest of the South and Central United States was at risk of similar tragedy.