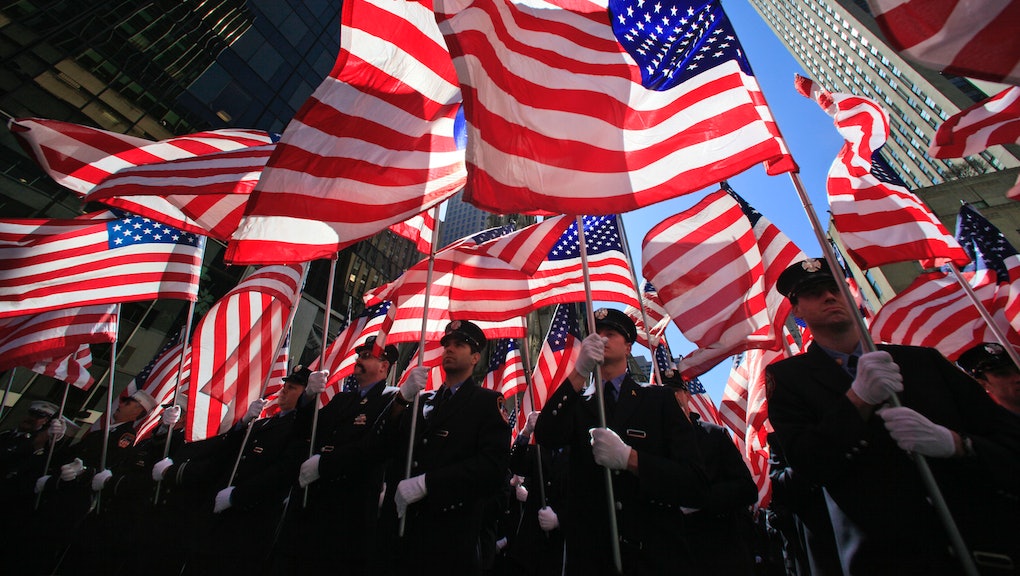 George Washington wouldn't really recognize today's America: nowadays, cars far out number horse buggies, and instead of using the Pony Express, you can "Yo" people from across town. But as much as the country has changed, it has held on to some fundamental beliefs that have shaped its inception — and if America's Founding Fathers were to come back to life today, they might appreciate the strides that the country has taken since their passing.

1. Americans are the happiest, most productive workers in the world.

While the Founding Fathers may be horrified by the big corporations that dominate America's economy today — remember what they did to all that tea from the East India Company? — they did believe in honest labor. And when it comes to productivity and overall happiness, American workers lead the way. As Benjamin Franklin said, "It is the working man who is the happy man. It is the idle man who is the miserable man" — and compared to the rest of the world, Americans are busy working and are very much happy.

It's easy to make the case that U.S. troop levels and military expenditure are excessive, especially given all the technological innovations that make close combat obsolete. Still, the fact remains that the U.S. defense is strong — and as George Washington said, "To be prepared for war is one of the most effective means of preserving peace."

3. The U.S. is more inclusive than ever.

In that same spirit of diversity and inclusiveness, America's recent victories in the fight for marriage equality have to be celebrated. While some of the Founding Fathers undoubtedly had less than progressive thoughts on homosexuality and LGBT issues, they still believed in an America where everyone was equal — and on that constitutional basis, U.S. courts have now made it possible for around half of America's same-sex couples to get married.

4. The U.S. is the best inventions hub in the world.

Franklin was not the only inventor among the Founding Fathers — Washington, Thomas Jefferson and others are also credited with coming up with inventive gadgets in their free time. America's investment in research and innovation is something that these noted tinkerers would appreciate.

The Founding Fathers were huge proponents of education, with Franklin even going on to serve as president of University of Pennsylvania. And while financing higher education is still a big problem for American students, it can't be denied that the U.S. is home to some of the best academic institutions in the world. International rankings such as Times Higher Education consistently place American universities at the top.

6. Among comparable countries, the U.S. has one of the smallest public sectors.

We all know that the Founding Fathers were not big fans of taxation — after all, it was one of the key causes of the Revolutionary War. But while they might faint at the sight of how much we pay in taxes these days, context is important: among OECD countries, the U.S. has the second smallest total tax revenue as percentage of GDP, just after Chile.

7. The U.S. has the most immigrants in the world.

The America that the Founding Fathers lived in was much more homogeneous than now. But given America's colonial past, they welcomed immigration and diversity. "Made up as it is of people from different nations, accustomed to different forms and habits of government, speaking different languages, and more different in their modes of worship, it would appear that the union of such a people was impracticable," Thomas Paine wrote in The Rights of Man. But if the government guaranteed equal rights for all, "all the parts are brought into cordial unison." And every year, the U.S. grows more diverse than ever.

8. Freedom of religion is still a huge deal in the U.S.

Religious freedom is among the most important principles that this country was founded on — and to this day, it remains a fundamental part of the American sociopolitical consciousness. Among the 25 most populous countries in the world, the U.S. is in third place when it comes to having the least government restrictions or social hostilities.

Despite pollution, industrialization and other threats to the environment, the Department of Interior and other independent organizations have worked hard to protect America's treasures. The country's nature-loving Founding Fathers are sure to appreciate the efforts that have gone into preserve these sites for posterity.