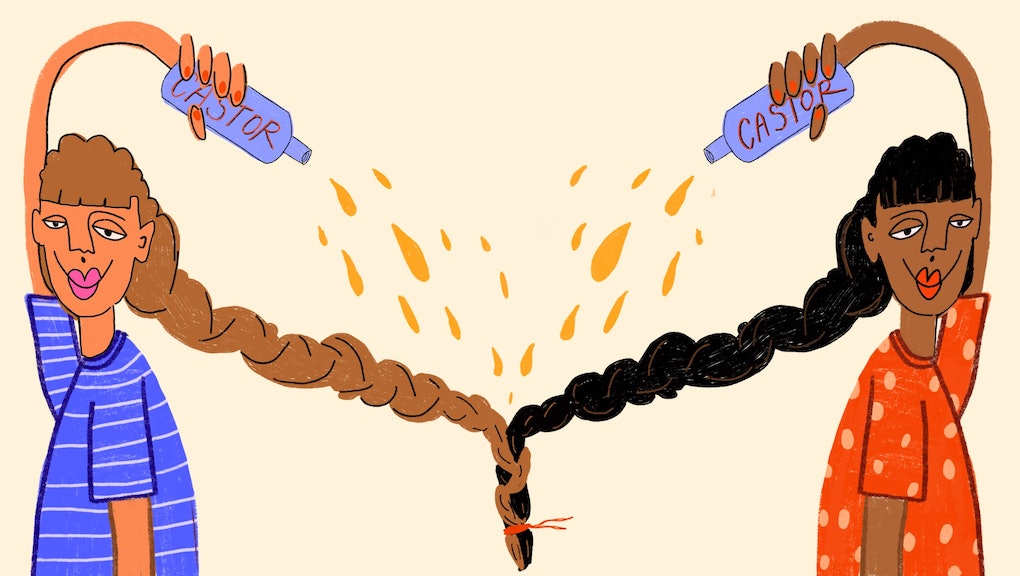 Castor oil for hair growth: Does it actually work?

When I visited my parents' home recently, my mom told me that she'd begun adding castor oil to her beauty ritual, massaging it into her scalp every few days, and combing it through her brows and lashes every night. “It’s supposed to make your hair grow,” she explained. A search of #castoroil on TikTok turns up a ton of results, confirming that using castor oil to get voluminous locks is, in fact, a thing (and that Mom stays on top of the trends). I’ll be honest: The possibility of a $12 vial of castor oil transforming my thin, sparse lashes is intriguing. But given all the wellness BS out there, I'm pretty doubtful.

Can castor oil really make your hair grow? I asked a trusted medical expert — one who remains unswayed by TikTok wellness influencers — all about the supposed elixir and whether slathering it on your hair is actually worth it.

What is castor oil, exactly?

Castor oil is derived from the seeds of the castor oil plant, or Ricinus communis, says Cindy Wassef, assistant professor at the center for dermatology at Rutgers Robert Wood Johnson Medical School. The seeds actually contain the toxic enzyme ricin, she explains, which gets deactivated in the process of making the oil.

Since castor oil is a humectant — meaning that it holds water — you’ll often find it in moisturizers for skin and hair, Wassef says. It also has antibacterial properties, she adds, so it appears in some acne products, and can help with wound healing and other infectious conditions (although nowadays, doctors typically treat these with pharmaceuticals).

In Ethiopia and other countries in Africa, people have harnessed castor oil’s antifungal properties for dandruff, which Wassef says is caused by a type of yeast. If you have severe dandruff, scratching the itchy scalp it causes can make your hair fall out — so castor oil can also technically help with this specific form of hair loss. It makes sense: “If you’re not scratching the hair, it can come back,” Wassef explains.

Is there evidence that it promotes hair growth?

So we know castor oil could counter hair loss related to severe dandruff — but that’s not the same as making your hair grow. In the few studies that did look directly at whether castor oil has this ability, the scientists “just didn’t get any hair growth,” Wassef says.

Her theory is that the Internet noticed that castor oil improved severe dandruff, allowing the hair to grow back, which led to the alluring claim that castor oil can help with hair growth. And remember that castor oil moisturizes hair, making it look softer and shinier, which could create the illusion of thickness.

Similarly, it can bind your brow hairs and eyelashes together, which could give them a fuller appearance, too. But while TikTokers' before-and-after videos might look impressive, you wouldn’t notice any actual increase in thickness if you were to examine these hairs under microscope, Wassef says.

And while some people with hair loss use castor oil to make it grow back, “hair loss is a really big category,” she explains. There’s hair loss related to scarring, female pattern hair loss, and much more. They “don’t all have the same treatment,” Wassef says. “It’s unlikely that castor oil would be a cure-all.”

Are there any risks to using it?

Wassef tells me that there have been some case reports of people developing contact dermatitis to castor oil — basically, inflamed or irritated skin where they applied it. If you still want to shell out for castor oil but prefer to err on the side of caution, she suggests first dabbing it on the area of your forearm just below your elbow crease, the way it’s intended to be used, every day for a week. (For example, some people leave castor oil on their scalp anywhere from a few minutes to overnight before washing it off. Follow your regimen of choice on your forearm.) If you don't notice any problems after a week, then it's probably safe to apply it to a larger area of your skin. This way, if you experience irritation, it’s limited to a small patch rather than, say, your entire scalp, Wassef says.

More rarely, a distressing phenomenon called acute hair felting could occur, based on a few case reports of densely matted hair in people who applied a lot of castor oil to their locks. “Their hair actually looked like felt,” Wassef says. The only fix is to cut the tangled area and let the hair regrow. Again, it’s rare, but “it happened to someone.”

Is it worth buying?

Castor oil is pretty affordable on Amazon, where it falls within the $10 to $15 range. Still, for hair loss, “I would invest in something else — not castor oil,” Wassef says. She recommends a short course of over-the-counter minoxidil, a.k.a., Rogaine, which has been shown to help with multiple forms of hair loss, to a certain extent. But if you don’t notice any improvement in three to six months, see a dermatologist — the earlier, the better. “Some hair loss is potentially reversible, but if it continues for too long, you really can’t get the hair back,” Wassef says. A derm will be able to identify the underlying cause and determine whether you need more than just Rogaine.

Wassef would also opt for eyelash serums — most of which contain compounds called prostaglandins, shown to help with eyelash growth — over castor oil. Latisse is the prescription option, she says, but there are similar products that yield comparable results.

All of this being said, castor oil could still bring joy to your life. Maybe it can be a soothing part of self-care ritual, like it is for my mom. Maybe its sheen will make your locks look more lustrous. Just know that if you’re happy with the results, it’s probably not because it made your hair grow.

More like this
Wanting to start a family motivated us to pay off $126K in a year
By Marianne Eloise
Can't bear to be in a relationship right now? Blame de-cuffing season
By Suzannah Weiss
Can TikTok's new résumé feature really help you find a job?
By Tracey Anne Duncan
Stay up to date