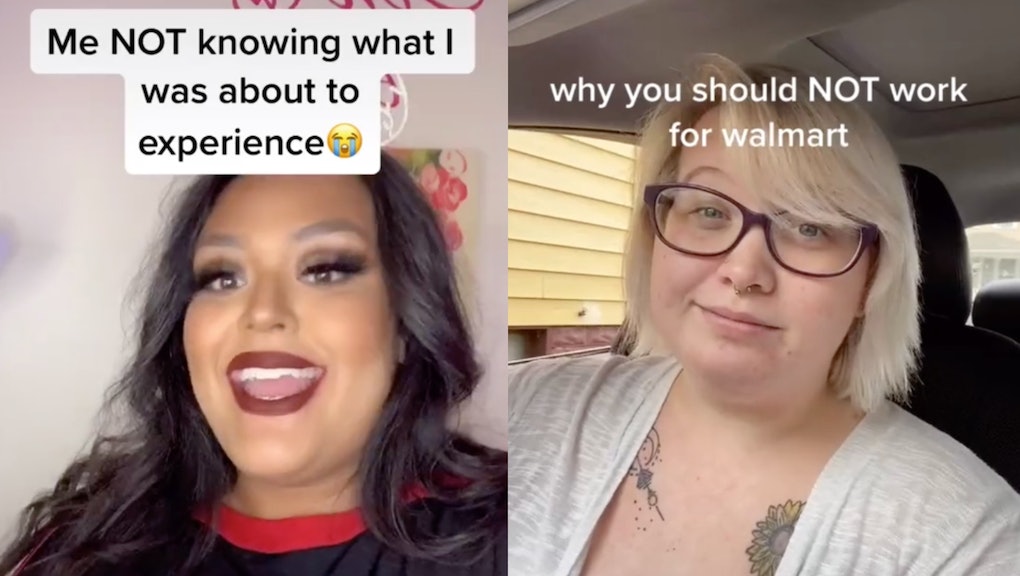 How TikTok is giving fed-up retail workers a voice

Destiny Bell-Wiggins posted the first TikTok video to her series “Why You Shouldn’t Work At Walmart” in mid-November. After being employed by the big box store for three-and-a-half years, the former customer service associate took to the popular app to criticize Walmart for its measly pay raises and its strict sick leave policy—all while racking up hundreds of thousands of views.

“I wanted to tell people that the company isn't what it all seems to be. It's a very corrupt work environment,” explained Bell-Wiggins, a 21-year-old from Akron, Ohio, who is now on part 18 of her series and no longer an employee with the company. “I've gotten variouses of responses from people all around the United States, some people are very disappointed and surprised with Walmart, some people believe that the company is not like that at all and I'm lying.”

Bell-Wiggins first started documenting her job and sharing it with her friends on Snapchat, but TikTok has given her access to a vast new audience. She has garnered nearly 90 thousand followers and over one million views.

Like Bell-Wiggins, hundreds of employees across the country, from Starbucks baristas to Target staffers have taken to the short-form video app to share insider information about their jobs. Some clips are a harmless look at what happens behind-the-scenes, such as those calming paint-mixing videos made by a Sherwin-Williams employee that the internet couldn’t get enough of. But, many workers are using TikTok to reveal the harsh realities about their jobs.

I was an employee who genuinely loved her job, and was hurt and felt taken advantage of in so many ways.”

Former Sephora facilitator Sereena Ortiz-Castro, a 24-year-old from Fullerton, California, is one of them. The majority of her TikTok videos are lighthearted makeup tutorials and shopping tips, but after she saw another Sephora employee go viral for sharing secrets about the job, she decided to use her account to “spill the tea” on how the brand treats its workers.

“I really wanted to share why I quit Sephora, but was pretty hesitant,” Ortiz-Castro told Mic over email. “I made a two-part video, but put the second one on private after it blew up because it made me really emotional revisiting it… I definitely felt a bit guilty talking about quitting because I wasn't sure if I went a little too far by exposing in detail the reason why I quit.”

In the first video, she details how her low pay led to her leaving the company after nearly four years, saying bluntly to the camera that “Sephora is greedy.”

“I was an employee who genuinely loved her job, and was hurt and felt taken advantage of in so many ways,” said Ortiz-Castro, who now shares videos about her new job as a sugar waxer. “I wasn't just some angry ex-Sephora employee who was trying to demolish the company because she was bitter.”

Like Ortiz-Castro, many workers taking to TikTok are hoping their videos educate their followers about toxic and exploitative work conditions at these popular chains. In another viral series of TikTok videos by a user named nogomado, the former Amazon warehouse employee explains the dangers that come from fulfilling orders while being held at unreasonable productivity standards, adding that the expectations made her afraid of using the bathroom. The videos were released around the same time Amazon reported a record-breaking holiday shopping season.

While Amazon hasn’t responded directly to videos like nogomado’s, last month an Amazon spokesperson told Business Insider that it was okay with its employees posting on TikTok, but they aren’t allowed to post during work. “We welcome employees posting to social media about their workplace and their experiences at Amazon, but we of course ask that they be respectful of each other, our customers, partners, and others, and that they do not share confidential information.”

But, employees having the freedom to post what’s happening at work to millions of viewers is seen as a risk for many megachains and corporations, who don’t want to tarnish their image or impact their sales. Even the innocuous videos of paint-mixing made by that Sherwin-Williams worker led to his termination, after management accused him of using company time and stealing.

“Someone commented on one of my posts last month about how Walmart got a TikTok user banned for exposing them,” Bell-Wiggins told Mic. “A lot of people want me to share a lot more about Walmart, a so-called ‘family-friendly’ company. I even have requests from people who want me to share their story anonymously because they are a current employee or a past employee but are too scared to open up about their story.”

As these videos go viral, some companies are welcoming the publicity — so long as they can control what content makes the app. A few are even hiring employees to make TikToks that show them in a better light. Over the summer, Dunkin' Donuts launched a new “crew ambassadors” program that allows certain workers to post brand-safe TikToks, such as explaining their favorite menu items. Other chains like Sephora and now Walmart have followed suit. The multinational retail corporation revealed last month that it was starting a program called Spotlight that would help salaried employees become influencers on TikTok videos and receive cash bonuses for views.

I even have requests from people who want me to share their story anonymously because they are a current employee or a past employee but are too scared to open up about their story.”

“The Spotlight program is a bunch of bullshit,” Bell-Wiggins said. “The company will do everything in their power and control and manipulate their employees to comply. Whether it's a promotion or a pay raise, they are simply doing this to bring back old customers they have lost in the past and manipulate the younger generation to think that their company is the best.”

While it’s not surprising that companies would want to control the narrative, their approach isn’t likely not to take off the same way the other videos have. Gen Z, which dominates TikTok, is known to value transparency and authenticity, and these brand-backed TikToks are essentially glorified commercials.

Ultimately, these viral videos are more than just a look into the lives of employees at their favorite stores: they’re a wakeup call to companies who need to take better care of their staff members — many who have risked their lives to work during the pandemic — and to consumers who can do more to support them.

“I genuinely hope that if someone from corporate saw my videos they would see that they really need to start recognizing the value of their employees,” said Ortiz-Castro. “There are a few of us on TikTok now, and we get millions of people who see our content.”

More like this
Can TikTok's new résumé feature really help you find a job?
By Tracey Anne Duncan
The Frito-Lay workers' strike has revealed some horrifying working conditions
By Vanessa Taylor
New study confirms we're right on time for a complete societal collapse
By AJ Dellinger
Stay up to date