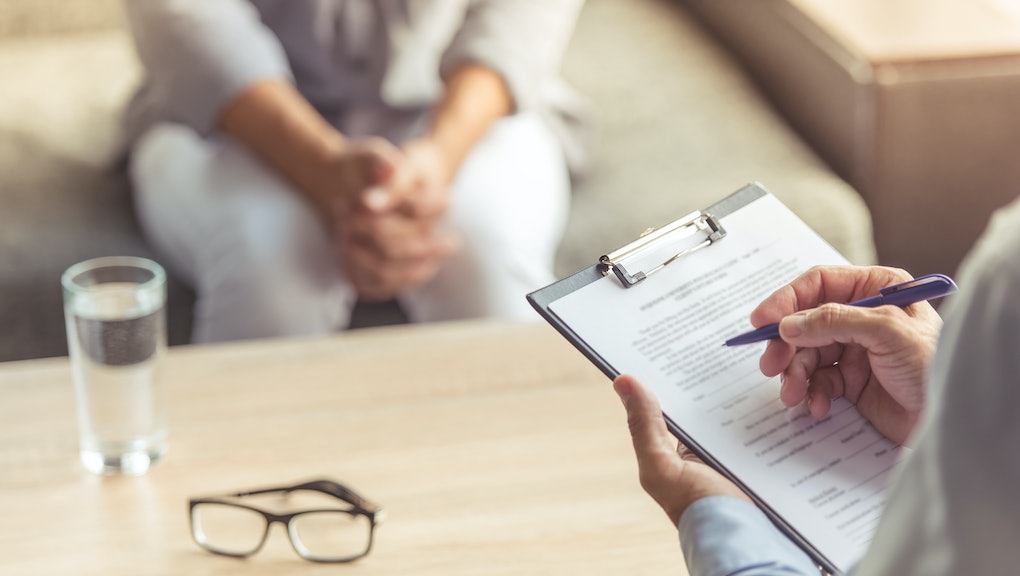 If your therapist offends you in some way, here's the best course of action

I went to a psychologist for the first time in my early 30s. He seemed to be a nice, generally put-together guy, whom I chose because his office was close to where I lived, and he was in my insurance company’s network. But within three or four sessions I realized I needed to end things with that therapist.

The first sign of trouble came when, as I told him I was struggling with self esteem and didn’t think I was attractive enough for women, he said something to the effect of: “But you’re a good-looking guy. I could understand you feeling this way if you had really bad acne, or something like that.”

I suppose those were well-intentioned remarks, but the first completely invalidated my own feelings, and the second made me wonder, “does this dude believe guys with acne scars should be forever alone?” It was pretty damn offensive to people who have acne — an actual medical condition.

As I walked into my session the next week, he snapped his fingers, pointed at me, and said, “You’re the teacher, right?” That was indeed my profession at the time, but for God’s sake, after multiple sessions I would’ve thought he’d remembered what I do for a living. Then, he began packing up his files and putting them into his carrier bag while I tried to, you know, divulge my deepest emotional problems. “Oh, don’t mind me,” he said. “You’re my last one of the day and when we’re through I have to pick up my son from school.”

How would I ever spill my guts out to this half-listening fool?

I never saw him again.

Bad therapist stories like mine — or worse — are all over the internet. Their behaviors range from weird (a therapist that acts like a friend) to creepy (hugs should not be a session staple) to rude (being direct doesn’t equate to being a jerk). Sometimes, like in my case, by making a session feel like an insignificant chore they can’t wait to be done with, they can just be downright offensive.

After only a few sessions with that therapist, I chose to discontinue therapy completely, and it took almost three more years of struggle before I acquired the courage to seek therapy again. But what do you do if you’ve been in therapy a lot longer and your therapist, whom you otherwise really like and has done great work in helping you grow, pisses you off?

The answer is — or at least should be — very simple.

“I think the first thing I would advise, to the extent they feel comfortable, is push themselves to be open and honest with their reactions,” says Anthony DeMaria, clinical psychologist and associate director of adult ambulatory service in the department of psychiatry at Mount Sinai St. Luke’s & West Hospitals. It’s the therapist’s job, in DeMaria’s view, to provide “a space in a relationship that allows for a context for people to understand themselves in a deeper way.”

This requires the therapist to show their clients support and offer validation, while building enough trust to facilitate a patient’s vulnerable inner exploration. This not only takes tact, but time. However, if the therapist is successful in this endeavor over the long-term, the lines of communication should ideally be open for such an uncomfortable conversation to take place — if the patient wants to continue to be in their therapist’s care at all, that is.

Just to be clear, there’s a clear difference between a therapist being offensive and a therapist making you feel uncomfortable by digging up some of your detrimental habits or unpleasant memories. Over time, a good therapist will encourage a client to see how they may have played a role in creating a particular painful experience. (At some point, those being therapized need to accept ownership of their behaviors.) When a therapist motions to do that, it could feel aggressively critical and hurtful to the patient, so the therapist has to be cautious and show compassion, regardless.

“The research actually shows that even the smallest amount of therapist hostility towards the patient can be really impactful on psychotherapy outcomes [but] there certainly are situations where it is advisable and necessary for therapists to draw boundaries, to set limits, to confront patients with [a] reality,” Demaria says.

To date, I’ve been with the same therapist — only my second, fortunately — for a little over five years. There certainly was a point where she started challenging me in ways she hadn’t previously, which frustrated me at times. But she was always respectful about it. And we’d developed so much trust to that point, and she was so transparent about what she was up to, that we talked openly about how I felt, and worked our way through it.

Now I’m in a place where I’m not only recognizing my own self-sabotaging behaviors, but pulling myself out of vicious circles that historically have led to them. That took friction, yes, but at least the conversations happened without her packing up her stuff before I was done spilling my emotional innards.

This article was originally published on Aug. 5, 2019

More like this
Didn’t get enough sleep? Here's how to survive the day, according to doctors
By Tracey Anne Duncan
How much sleep you need, depending on your age
By Dana McMakin
Remember the vaping crisis? Well, it hasn't gone anywhere
By Melissa Pandika
Stay up to date