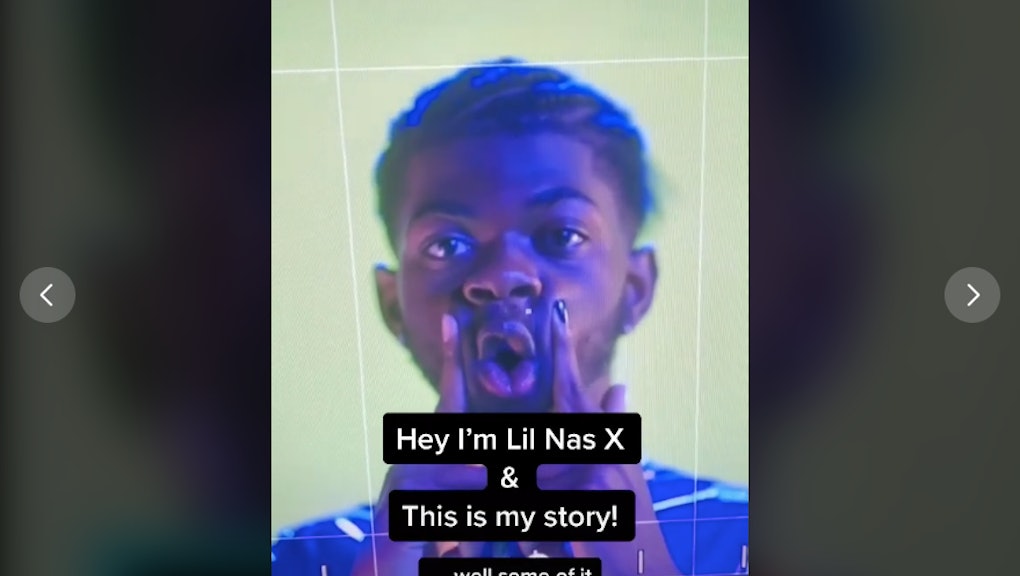 Lil Nas X’s revealing TikToks tell his story of fame, depression, and "contemplating ending it all"

Country-rap doyen, space elf, and Wrangler model Lil Nas X is the latest celebrity to open up about his mental health struggles. It’s increasingly clear that if more people were this candid about depression, the still-permeating stigma would decrease significantly. Not to be all “misery loves company” but hearing about somebody else’s issues that you yourself might be facing is certainly comforting. For this reason and others, his new TikTok series is a must-watch for other folks who may be battling mental health illness.

In the video series, titled "Life Story," the "Old Town Road” rapper details his struggles with depression and suicidal thoughts while giving a lot (and I mean a lot) of personal life details, from ongoing family tension to adopting pets to a painful breakup. The four-part series (he hints that a fifth is yet to come) shows the myriad ups and downs someone with depression and anxiety may face in any given period in their lives, even after ostensibly succeeding to the top of one's field.

Soundtracked to Radiohead's melancholic "Decks Dark," the first video describes the rapper's life before his rise to stardom — Lil Nas X was the first in his family to get into college, a major achievement. Still, he found himself depressed and friendless, grieving the death of his grandmother. During this time he started going to the doctor with self-diagnosed hypochondria, thinking he was dying. This tumultuous emotional period led him to find an outlet, and that was music.

In July 2018, Lil Nas X famously self-released his first mixtape, Nasarati, onto SoundCloud. As he describes, “THINGS WERE GOING GREAT!” But then they weren’t: he dropped out of school and moved in with his sister. But then his sister kicked him out. Then, in December 2018, he released "Old Town Road," which changed everything.

The other three videos are on his career trajectory: His duet with Billy Ray Cyrus, the remix of “Old Town Road,” which topped the Billboard charts for a record 17 weeks; his personal life getting upgrades (moving into his first apartment, adopting two dogs, finding a boyfriend), all the while his anxiety was still rising. The clips are expertly juxtaposed with ecstatic moments and tragic descriptions — a clip of him dancing has a caption about how at that time he was “spiraling,” finding himself “in a hotel room contemplating ending at all," he says, "but I didn’t."

Success, or the appearance of happiness does not mean depression or other mental health struggles can’t pull us down, so we need to eradicate that misconception. Thankfully, with stars like Lil Nas X sharing their stories, we get closer to that goal.