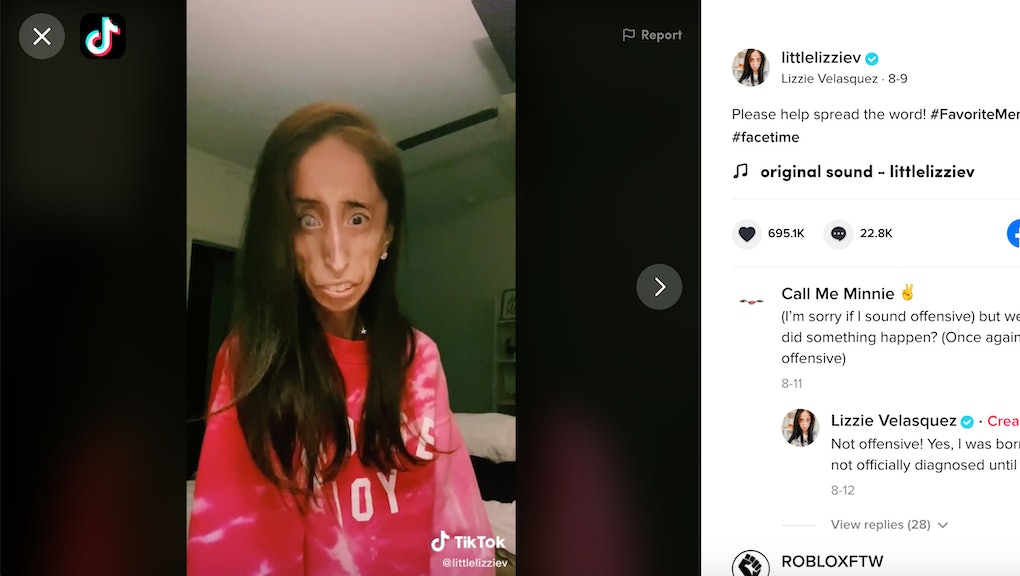 You know the viral prank, popularized by Jimmy Fallon, where parents pretend to have forgotten Christmas or eaten all their kids’ Halloween candy and their tots devolve into puddles of hilarious disappointment and horror? Well, a terrible iteration on that concept manifested in the form of the “New Teacher Challenge” on TikTok this month. In many cases, people with disabilities have become the butt of the joke, and which activists say promotes a harmful culture of fear of physical differences.

Here’s how the latest misguided TikTok “challenge” works: adults pretend to FaceTime their child’s “new teacher,” then usually show the kid a rough-looking mugshot or picture of someone making a silly face. But sometimes, the photo is of people with disabilities. After motivational speaker Lizzie Velasquez learned her photo was circulating on TikTok as part of the “New Teacher Challenge,” she posted a video of her own denouncing the trend, which racked up more than two million views and garnered widespread support.

"If you are an adult who has a young human in your life, please do not teach them that being scared of someone who doesn't look like them is OK, please," Velasquez said on TikTok. "This is a trend that needs to stop. Because we are humans. We have feelings."

As CNN reported, Velasquez was born with Marfanoid-progeroid-lipodystrophy syndrome, an extremely rare condition that prevents her from gaining weight, and she’s weighed around 65 pounds her whole adult life. The condition also affects her facial structure and caused her to go blind in one eye.

Velasquez is no stranger to cyber bullying: in the early 2000s, when she was just 17, someone uploaded a viral video to YouTube dubbing her the “world’s ugliest woman.” Now 31, she turned her resilience into a profession, becoming a well-known motivational speaker, author and influencer.

"I am one person that this has happened to, but there are so many others who this is continuing to happen to," she told CNN. "I'm just going to keep doing whatever I can, whether it's speaking out about it, or whether it's posting my own videos trying to get these mini-lessons in, and hope that they help."

Another prominent disability advocate and writer, Melissa Blake, was similarly alerted by friends that her photo was being used in the “New Teacher Challenge” on TikTok. (Blake was born with Freeman-Sheldon syndrome, a genetic bone and muscular disorder.) Whereas Velasquez took to TikTok, Blake penned an essay for Refinery 29 blasting parents who think it’s okay to mock people with disabilities.

“The TikTok prank has only reinforced how important disability representation is, especially given the fact that 61 million adults in the United States live with a disability — that’s one in four,” Blake wrote. “Beyond that, we need to normalize seeing people who don’t look like us or our family members. We need to teach the next generation that our differences should be celebrated, not feared or mocked.”

Velasquez similarly emphasized the importance of passing along lessons about inclusivity: "The only way things are going to change is if an individual changes themselves,” she told CNN. “And the only way it's going to happen is if adults now teach empathy and acceptance at home and understand what that looks like."