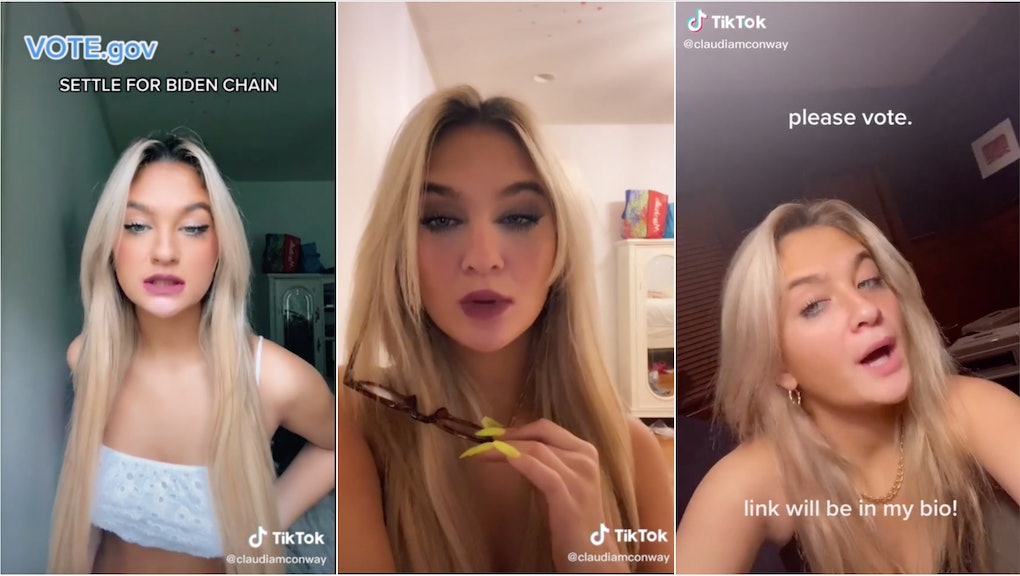 (Screenshots via @claudiamconway on TikTok)

Big news! Claudia Conway had a birthday last weekend, meaning TikTok’s favorite leftist teenage TikTok agitator is one year closer to escaping the clutches of her conservative parents, former Trump counselor Kellyanne Conway and never-Trump Republican George Conway. Claudia just turned 16 years old, but she’s been disparaging the president and his cronies (including her mother) to her 1.5 million followers for many months. In other words, before she could legally drive, Claudia was already one of the most influential Trump critics on Earth.

America’s obsession with Claudia Conway has been wild to witness. First, it was just notable that the child of high-profile political figures was using social media to publicly disagree with her parents’ conservative views. Then, when Claudia took credit for the fact that Kellyanne and George both stepped away from their glitzy jobs in Washington, the teen was lauded as a powerful activist. In early October, she broke the news that her mother had COVID-19 on TikTok, and the media began treating her like an undercover source.

Obviously, she’s none of these things. Claudia is just an ordinary 16-year-old in extraordinary circumstances. But it’s still fascinating to tease apart the societal forces that have contributed to her meteoric rise. To that end, several media outlets have been talking to her teenage fans, trying to make sense of whether Claudia is truly Gen-Z’s leader of the resistance.

Alwin, an 18-year-old from Wisconsin, told Slate he doesn’t think Claudia intended to go so massively viral: “Personally, I don’t think she’s doing it for attention. I think she’s made it clear that she’s just living her life and everything else is just happening. I feel like if anything she’s doing it to spread awareness because I feel like there’s a lot going on behind the scenes that’s crazy.”

Similarly, Jacob Sellers, an 18-year-old from California, told BuzzFeed News he thinks that Claudia is a victim of circumstance. “My whole childhood, I was manipulated — and seeing it in Claudia’s videos really drew me into her in the first place. Claudia is not a hero or a rebel. She is a kid who needs help,” Sellers said. Claudia has been engaged in a very public emancipation battle with her parents, with supporters going so far as to fund her efforts on Venmo.

Notably, the children of other prominent Republicans have lately been taking their parents to task, too. Rudy Giuliani’s daughter Caroline recently penned an op-ed for Vanity Fair, for example, in which she implores readers to vote for Joe Biden. A recent article in Psychology Today unpacked this phenomenon, arguing that labeling it as typical teenage rebellion is far too simplistic. Rather, it’s the result of a perfect storm of a few factors: the normal teenage impulse to “differentiate” from the nuclear family, coupled with having prominent conservative parents, and the amplification effect of social media.

“For the children of well-known or news-worthy parents in the contentious political arena, their actions also become newsworthy by virtue of proximity to their parents and the unceasing demand for news content that will attract audience attention,” Pamela B. Rutledge Ph.D., M.B.A. writes. Interestingly, academics say that political views can have a lot to do with parenting styles, which can also stoke rebellion. According to a 2016 poll, Trump-supporting Republicans were more likely to have an authoritarian style of parenting, which doesn’t leave a lot of room for independent thought on behalf of their offspring.

All of this helps illuminate the challenging circumstances Claudia Conway has had to confront at such a young age. It should also be a warning to adults who’ve been treating her like a commodity or a source of Beltway gossip. As 19-year-old Kamri from Atlanta told Slate in the days before Claudia’s 16th birthday, “You can’t put your entire, 100 percent trust into a 15-year-old. She’s a teenager and she’s still growing and doing things like any normal teenager would, including myself.”