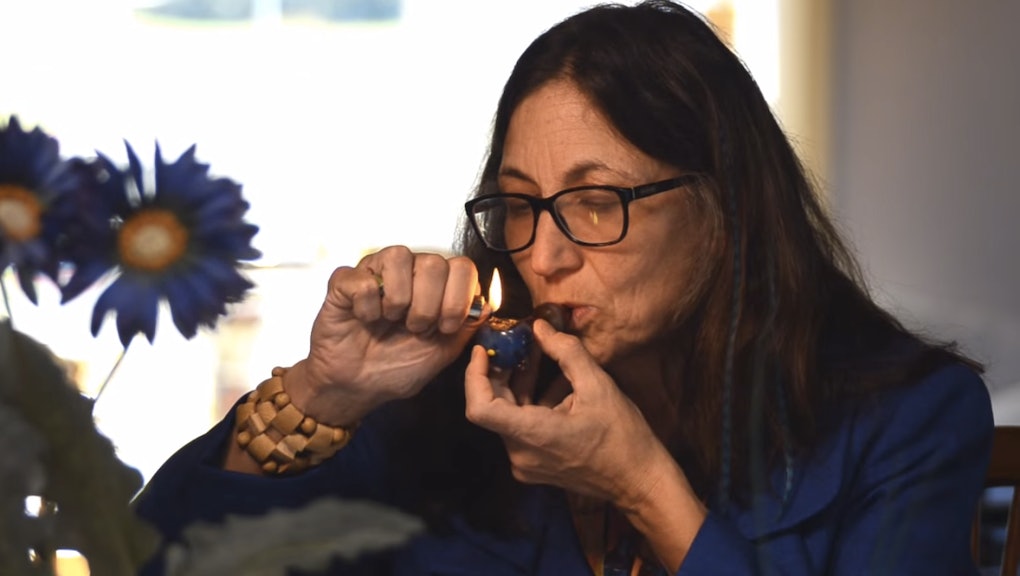 Here's something you don't see every day: A politician calmly explaining their unconventional stance on an issue, asking for their constituents to reconsider their long-held beliefs ... and then lighting up a big bowl of marijuana on camera.

Anne Armstrong, who is running for governor of Rhode Island on the Compassion Party's write-in ticket, has one big issue she'd like to accomplish as the state's top civil official: the legalization of marijuana. She herself smokes marijuana regularly to treat a chronic ailment and believes that our bodies need cannabinoids to be nice and healthy.

Armstrong's campaign video manages to be both a refreshing hit of honesty and a little bit out there:

I'm Anne Armstrong, and I'm going to be the next governor of Rhode Island. And I hope that during my tenure, I will be able to dispel a number of misconceptions about cannabis use.I use cannabis every day. I cook it into food, and I use it as medicine to help me with a physical condition. I use it as a dietary supplement, and yes, I do smoke cannabis, and yes, I do inhale.And it helps me it helps me. It helps me to focus, it helps to facilitate communication. It doesn't make people crazy the way you've been told.And so I hope that you will read and open your eyes and realize the truth that we've been lied to for a long time by our government, and something that's been essential to our health has been taken away from us, and that's why people get sick with cancer, that's why they get sick with a lot of chronic degenerative diseases — because they've been deprived of cannabinoids, and our bodies need them.So as governor, I'm going to do everything I can to remove the stigma. Cannabis users shouldn't be subject to shame. They shouldn't be ostracized or marginalized, and I hope you'll help me bring that about. Thank you very much.

One step beyond: While her passion for marijuana legalization is charming, Armstrong does harbor a few unorthodox opinions on pot. On her campaign page, she argues that not only would reform to drug laws save lives but that marijuana is actually a "performance enhancer."

Armstrong emphasizes that she is primarily concerned about the extremely sick, and proposes that marijuana legalization would greatly benefit patients with diseases like cancer, Alzheimer's or Parkinson's.

Our typical patient is facing her first diagnosis of cancer, or a recurrence. He is dealing with Crohn's or Alzheimer's, ALS or Parkinson's, or she is a middle aged woman amazed at how cannabis helps her lose weight and deal with menopause. In all these cases, cannabis can bring about complete remission in some case, and in nearly all, can eliminate or greatly reduce the need for toxic and expensive pharmaceutical drugs. Please seek the facts for yourselves.

Armstrong might be exaggerating a little, but she's not totally wrong. A significant amount of scientific evidence backs the medical applications of marijuana. Studies with rats have suggested that THC (the psychoactive component of marijuana) has properties that may inhibit the growth of tumors. Other research has demonstrated that THC "directly affects Alzheimer's pathology by decreasing amyloid beta levels, inhibiting its aggregation, and enhancing mitochondrial function," neuroscientist Chuanhai Cao told Fox News.

What are her chances? Becoming the next governor of Rhode Island will be tough for Armstrong, considering that only around 52% of voters in the state back legalizing and taxing marijuana like alcohol. While robust, that's not exactly a mandate for the kind of candidate who told the Boston Hemp Fest that she'd smoke from her office and install a "people's cannabis garden" in the statehouse rotunda.

But Armstrong's honesty and candor make her a bit braver than Rhode Island's current crop of gubernatorial candidates, not one of whom has backed marijuana legalization or decriminalization.