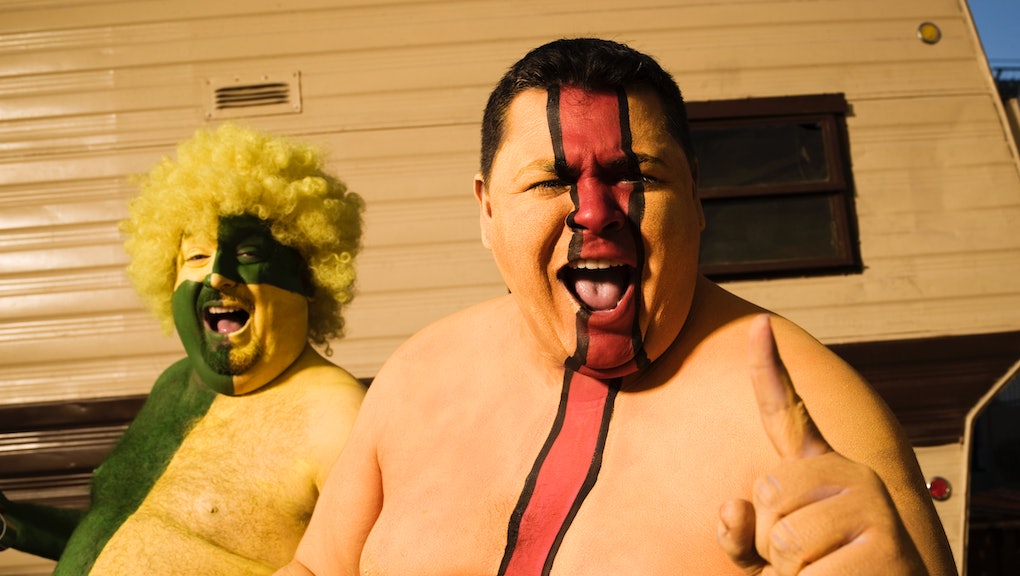 Why Your Sports Team Could Be Making You Fat

At least, that’s according to Pierre Chandon, a L'Oréal chaired professor of marketing, innovation and creativity at INSEAD in France, and Yann Cornil, a doctoral student, who together conducted a study examining the correlation of eating habits with football team performance on any given Sunday.

The results showed that watching your team suffer defeat turns you into an unhealthier eater than if you had watched your team win.

"For many people, being a supporter of a football team is an important part of their identity,” Chandon told Mic in a phone interview. “In fact, fans don’t say 'they lost' or 'they won' but 'we lost' or 'we won.' When our favorite team win, we feel good, we feel strong, and it’s easier to make healthier food choices.”

Chandon compared the phenomenon to being in love, a sensation that deefly affects your appetite. “When our team loses however, we feel weak, and it becomes more difficult to resist the comfort of indulgent food," he said.

The study looked at the consumption habits of people living in the 30 NFL host cities over the course of two seasons. They compared the subjects to people in cities where matches did not take place that day or people who did not have a home NFL team to root for. On average, Americans eat 16% more saturated fat and 10% more calories the day after their NFL team suffers a loss. In contrast, the day after their team wins, fans ate 9% less saturated fat and 5% fewer calories. The results were consistent across genders.

The chart below illustrates the differences in consumption habits:

There are still a few questions of course. Chandon and Cornil studied both NFL fans and French soccer fans, teams that play once a week instead of say, a basketball team that plays multiple games a week.

"We tried to see if people would Google keywords related to indulgent eating such as pizza or healthy eating like diet in cities with basketball teams on the day after a win or loss, and we found no systematic pattern," Chandon told Mic. "Of course, these results are not directly comparable to those reported in the study because we used a different methodology."

The study also did not look at whether the correlation between a team losing and fans' consumption habits would escalate during games of greater importance. However, Chandon said that he would expect it to be the case.

The takeaway? Chandon said he was “surprised by how strong the results were” even among the notoriously foodie French. “We realized that sports is really a big deal in our world."

Ultimately, being a fan doesn’t have to be bad for your body. Other studies have shown that sports make people more active from a physical, political and social standpoint, can build civic interest and improve our language skills. But by the same token, if your entire self-identity revolves around your team’s gridiron performance, no amount of self-affirmation may be able to save your swelling waistline.

"There are really few things that make people come together and collectively feel like they are winning or losing," Chandon said.