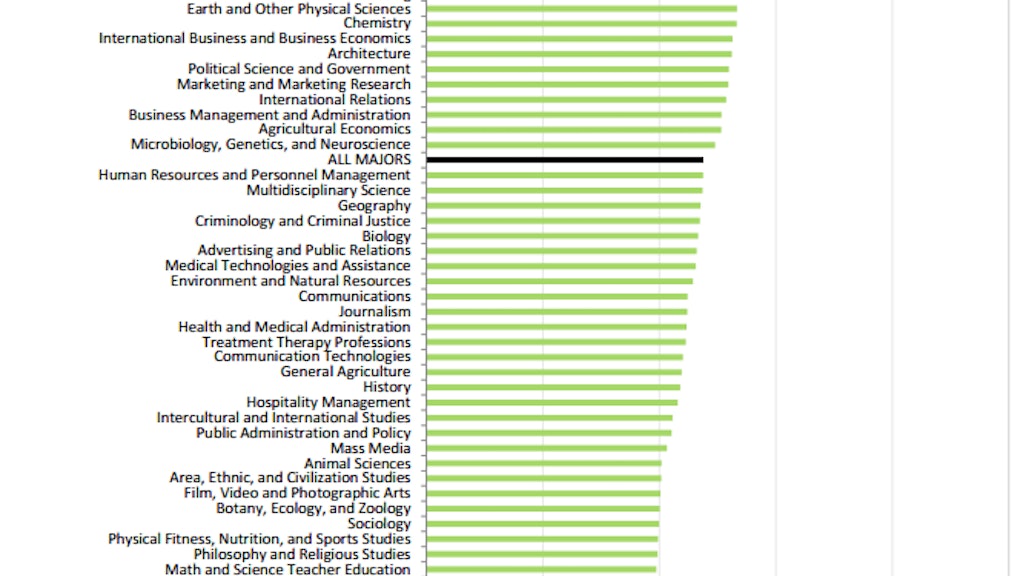 The news: College is still worth it, no matter what degree you get.

That's the verdict of a new report from the Hamilton Project, produced by research fellows at the Brookings Institution. The analysts crunched U.S. Census Bureau data to come up with a picture of which professionals make the most money over the course of their lifetimes.

The outcome for high school graduates (who make around $32,000 annually three decades into their careers) isn't pretty; they pull in just $580,000 over the course of a lifetime of work. On the other end of the scale, chemical engineering majors make $2.11 million, with the richest earning just shy of $4 million. Engineers tend to come out ahead, snagging nine of the top 10 slots. In between is virtually every college degree imaginable. Criminologists make $1.17 million, historians pull in $1.09 million, energy and extraction engineers make $2.03 million and theologians come out with a paltry $820,000.

Important caveat for this chart: It doesn't include people who have graduate degrees — doctors, professors, lawyers, doctorate-holding scientists and other highly advanced specialists with years of formal training. (As the Washington Post's Jeff Guo notes, this also means that many high-level managers or government employees are missing from this list). It also excludes people with master's or other advanced degrees, meaning this pool of jobs reflects a typical B.A. or B.S. holder's expected earnings.

Your pay isn't set in stone: Guo notes that graduates in some majors, like economics, have a wide distribution of pay ranges, indicating the "diversity of jobs that economics majors fill." Others, like nursing, pay well on both ends. A nurse in the 25th percentile, for example, makes $950,000 over the course of a career, while the the 25th percentile of drama students make $470,000. But the 90th percentile of drama students make just short of $2 million, compared to nurses, who cap out a little higher at $2.16 million. Being a nurse is a safer financial bet, guaranteeing a stable range of possible incomes.

Other high-risk majors include things like hospitality management, which ranges from $660,000 to $2.5 million. The presence of such high income variation among many majors is solid evidence that while some degrees are less likely to work out than others, a not-insignificant number of people in any discipline are able to succeed financially. That art degree isn't so useless after all.

The takeaway: What the report's authors really want to get across is just how important a college degree can be to future earnings. Every single one of the majors listed made more than a comparable high school graduate, making a bachelor's a remarkably good investment. Even an associate's degree pays off, generating an extra $280,000 over the course of a lifetime. Almost every major paid a million or more at the 50th percentile, meaning many college-bound students will end up making double or more than they would otherwise.

With student debt levels rising dramatically, a lot of that income is being sucked back into loans — and people who complete some college but fail to obtain that shiny degree don't end up much better than those who didn't go to undergrad in the first place. So while entering college is still a great idea, remember it's setting you up for financial commitments that will have their own obligations.