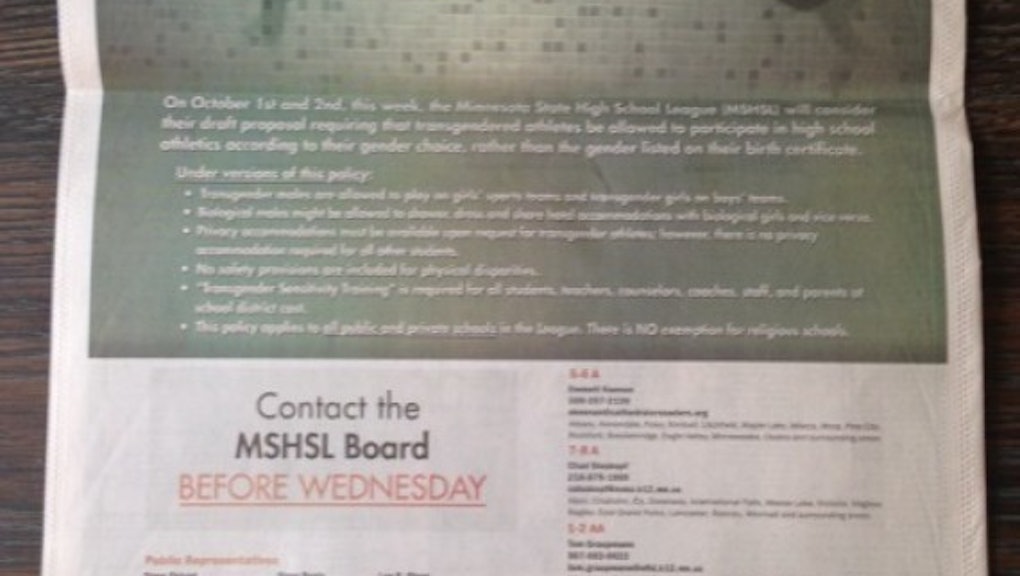 Controversy swirling around a newspaper ad and a school policy this week proves once again that civil rights movements are made and broken in the bathroom.

Minnesota State High School League officials met Thursday to approve the MSHSL Proposed Transgender Policy. The proposed policy would allow transgender students to participate in their high school sports teams based on their preferred gender identity, not the sex they were assigned at birth.

In the wake of heated debate, however, the board decided to postpone their vote until Dec. 4.

The board's decision (or non-decision, in this case) was a blow to transgender advocates who had hoped the district would join other places with inclusive school policies like those of Atherton High School in Louisville, Kentucky.

Much of the controversy centered a single-page ad, printed in the Minneapolis Star Tribune and taken out by anti-LGBT organization the Minnesota Child Protection League. In an effort to invoke outrage, readers of Minnesota's largest newspaper were accosted by this rhetorical question: "A male wants to shower next to your 14-year-old daughter. Are YOU okay with that?"

This kind of language is intended not only to stoke fear of transgender people by implying that they are pedophiles and rapists (note that the daughter is 14 but the trans person, who would inevitably be the same age if participating on the same sports team, has no given age), but is also dismisses their identity all together (the daughter's cohort, instead of being rightly identified as female, is dismissed as "male").

Of course, the Minnesota Child Protection League is notorious for their anti-LGBT activity. "A group of veteran religious right and tea party activists," is how the members are identified in a report by the LGBT Minnesotan website The Colu.mn. The League's founder, Barb Anderson, has fashioned herself in the mold of singer and activist Anita Bryant to the extent that GLAAD has added her to its Commentator Accountability Project.

Minnesotans have largely responded in shock and disgust, taking to Twitter to criticize the Star Tribune's decision to think with their wallets instead with their minds. Many commenters claimed they are going to cancel their newspaper subscriptions altogether, proving that bigotry is no formula for success.

The polarizing controversy spilled over into the the board meetings themselves, which included an emotional speech from transgender high school student Zeam Porter.

"My love for basketball last year made me believe I could handle being on the wrong team," Porter said. "That was wrong. Constantly being misgendered and called the wrong name took away my soul. I already feel like I don't have my body — now I am soulless."