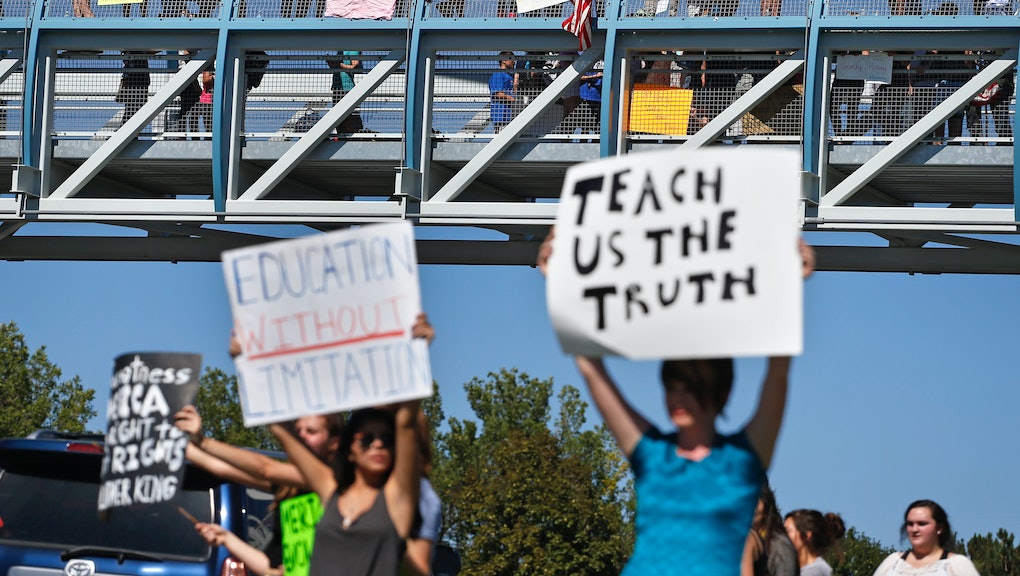 The teachers have joined pupils all over Jefferson County who have been protesting for close to two weeks against the school board's proposal to "promote citizenship, patriotism, essentials and benefits of the free-market system, respect for authority and respect for individual rights." The plan simultaneously promises not to "encourage or condone civil disorder, social strike or disregard of the law."

"It's a really, really scary to be a teacher in Jefferson County right now," one teacher who wished to remain anonymous told the Guardian. "My feeling is it's an attack on teachers and public education, and a disregard for the needs of our students."

There's more to it than patriotism and respect, however. Though the teachers are likely concerned with the proposed changes to the curriculum — the national Advanced Placement program cautioned against censoring "essential concepts" in its classes, Reuters reported — they also have their own grievances with the school board.

As KUSA-TV reported, many teachers are frustrated over the board's plans to change their compensation packages. John Ford, president of Jefferson County Education Association, told the station that these changes lacked transparency.

"I mean the secrecy part of that, the salary scale scheme that they came up with and the way they did that with no collaboration at all with the teachers," Ford said.

In response, school board president Ken Witt said, "I am disappointed that teacher use our students as political pawns."

Things are definitely murky. It's difficult to pinpoint who exactly is organizing the protests. Some blame the teachers union — union representatives dismissed this, claiming protests are coming from a grassroots movement — while others believe they're the work of partisan groups such as Americans for Prosperity and the National Education Association, the Guardian reported.

Whoever it is, they're doing a fantastic job of drawing attention to the district's questionable actions. The protests are the height of irony given that the school board's original intention was to snuff out any whisper of civil disobedience in American history. The fact that the country was largely founded upon those principles has fallen by the wayside, it seems.

"I don't think my education should be censored. We should be able to know what happened in our past," Tori Leu, a 17-year-old student at Ralston Valley High School in Arvada, told the Associated Press.

As the teacher protests have shown, the students aren't alone.

"I think it's awesome that students understand and recognize their first amendment rights and they're taking action," Ford told KUSA-TV.

With plans to stage a massive protest Oct. 1, it looks like things are far from over.