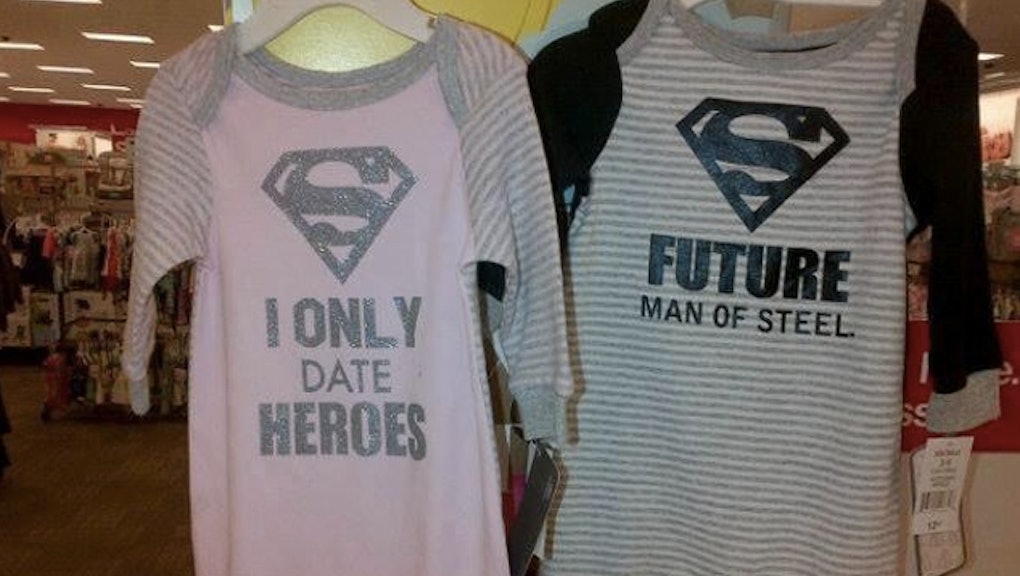 These Superhero Pajamas Are Making Some Feminist Mothers Really Angry

Call it bad marketing, call it sexist or call it cute — Target has raised a lot of ire from its new Marvel Comics children's clothing for playing up gender stereotypes.

Two University of Waterloo professors, Christine Logel and Aimée Morrison, took the big-box retailer to task this week, instigating public criticism of the store after Logel snapped a photo of two pajamas in a Target Canada store, which Morrison posted to Twitter:

Morrison, an associate professor of English, similarly castigated Target's marketing decision that defines women's worth in relation to the men they're connected to. "Even for tiny babies, we seem to think of girls as gaining power and worth from whom they're romantically linked to," she told CTV. "And boys get to become agents of action in their own right."

Target was also under fire this week for extending those sexist stereotypes beyond the children's section to the junior's section, wherein one customer found this girls T-shirt:

People began tweeting other examples, not necessarily exclusive to Target or Marvel Comics, of the pervasive sexism that finds its way onto children's clothing. These examples, and others, can now be found at the Sexist Babies Tumblr:

But should these professors and other angry moms on Twitter "lighten up"?

But there's a flip side to the controversy, too. These shirts never actually declare a subject — that is, a baby of any gender wearing any of these pj's can be the "future Man of Steel." This means that in order to be outraged by the sexism of the clothes, you have to inadvertently perpetuate stereotypes, specifically stereotypes about color. Surely, in their own minds which have undoubtedly been colored by sexism, they read "pink" as code for "girl" and "blue" as code for "boy." But in recent years, haven't we gotten beyond that? If not, someone should've told Jenna Lyons a few years ago that painting her son's toenails pink was taboo.

Oh, wait, some sexists did.

It's unlikely that Target would create pink pajamas with the idea that they are gender neutral — let's not give them too much credit — but consumers don't have to buy into the system. What's to stop a mom from buying the "Future Man of Steel" outfit for her daughter? Gender stereotypes are only effective if consumers continue to insist they exist. The Target incident proves we still have a long way to go on that front.