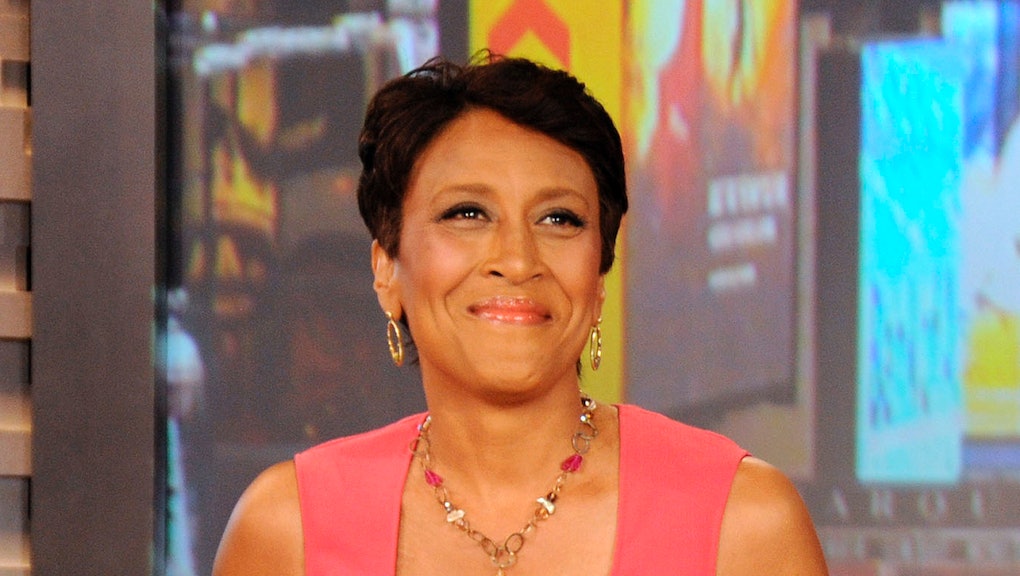 Earlier this summer, news correspondent and former Good Morning America anchor Joan Lunden recalled the moment she heard the words no woman wants to hear during a doctor's visit: "You have breast cancer."

What ultimately inspired her to go public with her diagnosis, she said, was her late father's legacy as a cancer surgeon combined with her nearly two decades as a women's health advocate. Lunden took the latter mission head-on in 1997 when she left Good Morning America after 17 years.

And to kick off October, which is Breast Cancer Awareness Month, Lunden returned to another morning news desk — all in her efforts to inspire millions of others still in the struggle, as well as survivors.

"The other night I was going to bed and I said, 'You know, if he was looking down right now, he would say, "All right, you know you've got this and you've lived your life in front of an audience. Use it,'" she said in a June interview with Robin Roberts. "Learn everything you can. Impart that information. Go out and try to inspire and maybe save lives."

Lunden is not alone, as countless other men and women everywhere, including a number of well-known actors, musicians and politicians, have publicly made their own battles with the disease public.

Each year, 1 in 8 American women will be diagnosed with breast cancer; more than 40,000 women and men die from the cancer each year. Meanwhile, there are currently more than 2.8 million breast cancer survivors in the U.S. This year, as we begin Breast Cancer Awareness Month, Lunden and her peers serve as shining examples of hope for everybody involved in the breast cancer fight.

After her 2004 breast cancer diagnosis, Etheridge turned heads when she made an iconic entrance on stage at the 2005 Grammy Awards. Together with Joss Stone, the singer rocked it out in a Janis Joplin tribute on music's biggest night, not long after ending what would be her last round of chemotherapy. On national television, Etheridge boldly stepped up to the microphone, belting "Piece of My Heart" without a wig to hide her hair loss from the treatment.

A lumpectomy and five rounds of chemo and radiation later, Etheridge made a full recovery. And her valiant efforts, including that Grammy moment, were lauded in India.Arie's hit song "I Am Not My Hair."

Shortly after a very public split with cyclist Lance Armstrong in 2006, Crow revealed that she'd been diagnosed with early-stage breast cancer. She recently revealed in an op-ed that opening up about it publicly, in an interview with Larry King, helped her channel the emotions. Crow also eventually turned to her music, writing songs that embodied her journey as part of her album Detours.

The Good Morning America anchor has battled cancer not once but twice, with all of America watching. After being diagnosed with breast cancer in 2007, she opened up about her struggle, noting that early detection was key to her beating the disease.

Then in 2012, she was diagnosed with a cancerous blood and bone marrow disease. Courageously, Roberts let the cameras keep rolling, following her through all the ups and downs, and perhaps saving lives in the process. And both times, Roberts proved to everyone — and herself — that with support from loved ones and smart decisions, cancer fighters like her can make a strong comeback.

During a third round of fertilization efforts in her quest to become a first-time mother, doctors diagnosed Rancic with early-stage breast cancer in 2011. Months later, the Fashion Police co-host revealed in an interview with People magazine that she also opted for a double mastectomy in order to try to prevent a recurrence. Rancic said she felt the surgery would make her lose part of "what makes me a woman," but her husband's support and affirmation helped give her peace of mind as she moved towards surgery.

"This is the biggest thing in my life I've ever had to overcome," she told People. "But I'm going to come out better than ever. I truly believe that."

After her 2007 diagnosis, Kotb underwent an extensive eight-hour surgery that involved a mastectomy and breast reconstruction. Shortly after, the Today Show host spoke with Ann Curry in a touching interview, noting that she decided to come forward after seeing a group of women walking to raise money for treatment and research efforts.

In a September 2011 interview with Ellen DeGeneres, Sykes said doctors discovered the cancer after having a procedure for a breast reduction. She opted to have a double mastectomy, given her family history of breast cancer. True to her nature, the hilarious comedian looked back on an otherwise harrowing journey — and the decision to speak out — with her trademark brand of crass humor.

"I was like, I don't know, should I talk about it or what? How many things could I have? I'm black, then lesbian. I can't be the poster child for everything," she told DeGeneres. "At least with the LGBT issues we get a parade, we get a float, it's a party. I was real hesitant about doing this, because I hate walking. I got a lot of [cancer] walks coming up."

While her husband was roughly midway through his second term as president, doctors discovered a small number of cancer cells in one of Nancy Reagan's breasts. According to a 1987 report from the New York Times, Reagan quickly underwent a mastectomy. Her decision had real consequences. A 1998 study found that news of her diagnosis and surgery led to others becoming more aware of options while fighting breast cancer.

The Academy Award-winning actress won her battle with ovarian cancer in 2003 — and never revealed that she was ill at the time until 2009. Just a few years after publicly discussing her first bout with cancer, Bates was diagnosed with breast cancer and underwent a double mastectomy. While Bates did not reveal many details about her fight while it was happening, she has since said that if she did it over again, she would have opted to be open about her struggle.

"Now if I go through it again, I think I would be a lot more open about it," she said in a 2012 interview with Anderson Cooper. "I admire people who have been open like Melissa Etheridge and women I see walking around facing it with out wigs and all of that stuff.

Fact: It is indeed possible for men to be diagnosed with breast cancer.

Shaft actor Roundtree is one high-profile example. The legendary Roundtree underwent a double mastectomy and chemotherapy after his 1993 diagnosis. He's since worked to raise awareness among men about breast cancer and now stars in a new role as Gabrielle Union's TV dad on the hit BET show Being Mary Jane.

Diagnosed with breast cancer in 1997, the critically acclaimed film, TV and stage star allowed news cameras to follow her around to chronicle her journey to recovery. In an interview for Oprah's Master Class, Carroll said she was initially reluctant to go public, because she didn't want anyone to associate her name and her legacy with having cancer.

"Then I thought, that's pretty arrogant," she said in the interview. "There are millions of women who deal with this every day. We have to work together here, and it's my responsibility to help them with that."

Smith underwent breast cancer treatment in 2008 while reprising her role as professor Minerva McGonagall in Harry Potter and the Half-Blood Prince. Her diagnosis meant she was reluctant to continue performing in film and on stage because of the energy it required — which could've been bad news for fans of her character the Dowager Countess on Downton Abbey.

But somehow, she managed to fuel herself on a path towards resilience.

"The last couple of years have been a write-off, though I'm beginning to feel like a person now," Smith told the Times in 2009. "My energy is coming back. Shit happens. I ought to pull myself together a bit."

The Three's Company star and famed health guru was diagnosed in 2001 and remains cancer-free, even after her controversial decision to refuse chemotherapy after a lumpectomy and radiation. Somers revealed in a September interview with Closer Weekly that she maintains a strict exercise plan, an organic diet and makes a point of getting eight or more hours of sleep each night.

"At the height of my success on television ... I was happy, but I didn't have the wisdom and perspective that I have now," Somers said, noting that she learned even more about the importance of self-care. "When you do achieve wisdom, you look back and you often think, 'I wish I knew then what I know now.'"

Not long after her husband's first failed presidential bid, Ann Romney was diagnosed with a noninvasive form of breast cancer in late 2008. Having detected it early, Romney underwent surgery to have the tissue removed and has been cancer free since. Fully aware of her family's history with cancer — she lost her mom, grandmother and great-grandmother from breast and ovarian cancer — Romney has been quite outspoken about her journey.

In a 2012 interview with America's Radio Network, she said she celebrates each and every day. "Life is an interesting game," Romney said. "Sometimes you just deal with the cards that are dealt you. And you just go on. You just push forward."

The Australian pop singer of hits such as "Can't Get You Out of My Head" and "Come Into My World" received her diagnosis in 2005, with doctors catching the cancer early. As a result, the dance icon had to cancel her tour and immediately plan for her treatment, which included a partial mastectomy. The experience, she said in a 2014 interview with 60 Minutes, helped her learn that it was OK to ask for help and have other people take care of you when needed.

"I [now] know I have strength," she said, "But when you're fighting something where there's a lot of unknowns, it's a mixture of emotions."

The Married with Children and Samantha Who? star underwent a double mastectomy after her 2008 breast cancer diagnosis. For an actress who's kept audiences doubled over for decades, the news was no laughing matter. At first, Applegate said in an interview with Oprah Winfrey at the time, she opted to keep her diagnosis quiet — but eventually made it her mission to push for increased breast cancer awareness and early-detection initiatives.

"I am a 36-year-old person with breast cancer, and not many people know that that happens to women my age or women in their 20s," she told Oprah. "This is my opportunity now to go out and fight as hard as I can for early detection."