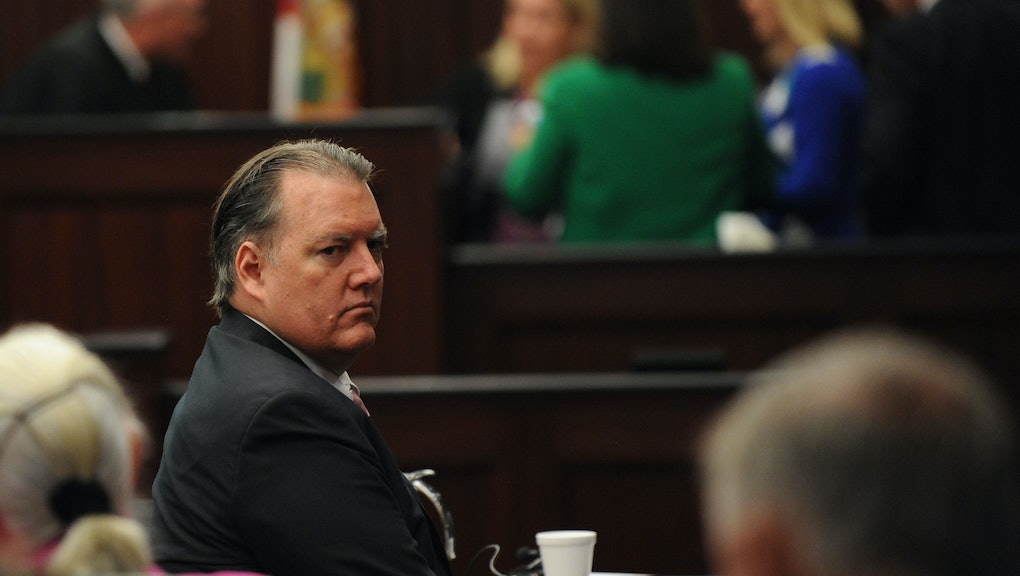 The news: People interested in justice and those who don't like it when black people are murdered with near-impunity by white men can breathe a big sigh of relief today.

Prosecutor John Guy added that "the defendant didn't shoot Jordan Davis to save his life. He murdered him to preserve his pride." His fiancee testified that Dunn never once mentioned seeing a weapon in the other car, while witnesses verified that he had continued shooting on one knee as the car fled the scene.

During proceedings, Dunn referred to hip-hop playing on Davis' stereo as "rap crap" or "thug music," leading many observers to conclude that he held deeply unsettling opinions on black culture. The Los Angeles Times reports that Dunn "made no secret" of his opinion of Davis and his companions:

In reality, Dunn was either disastrously irresponsible with his firearm or lied about attempting to kill four black kids over rap music. He deserves to be put somewhere where he can't hurt anyone else, and it looks like he will be.

The context: Dunn's case had many similarities to that of George Zimmerman, the community watchman who confronted and shot unarmed black teenager Trayvon Martin just over 100 miles away in Sanford, Florida. Both claimed self-defense, and both endured national attention for the shootings and legal battles that ensued. Neither Zimmerman nor Dunn sought the pre-trial immunity that can be granted under the state's incredibly controversial Stand Your Ground statutes, which allow defendants to avoid prosecution by demonstrating to a judge that the shooting was justified.

Both Zimmerman and Dunn called attention to flaws in Florida's legal system. The Tampa Bay Times reports that 70% of persons invoking the states's Stand Your Ground laws ultimately succeeded in avoiding a trial, while "73% of those who killed a black person faced no penalty compared to 59% of those who killed a white."

While the data is complicated and the sample size was tiny, Urban Institute fellow John Roman found that whites were far more likely to be let off the hook for killing blacks in Stand Your Ground states than in others. PBS illustrated the disparity in the stark chart below.

There's ample evidence that states with Stand Your Ground laws also tend to have more white vigilantism, justifiable or not. As the Christian Science Monitor reports:

From 2000 to 2010, justifiable homicides doubled to 326 annually largely thanks to Stand Your Ground laws while the overall homicide rates in states imposing them remained flat. Those states that did have the laws experienced 50% rises in the number of justifiable killings, explaining most of the increase.

Putting Dunn behind bars certainly won't resolve these systemic inequities or make sure the next Florida man to kill an unarmed black kid under questionable circumstances will end up facing justice. But it is a small victory in a state where killing black people often comes with less scrutiny than it would if the victim was white.