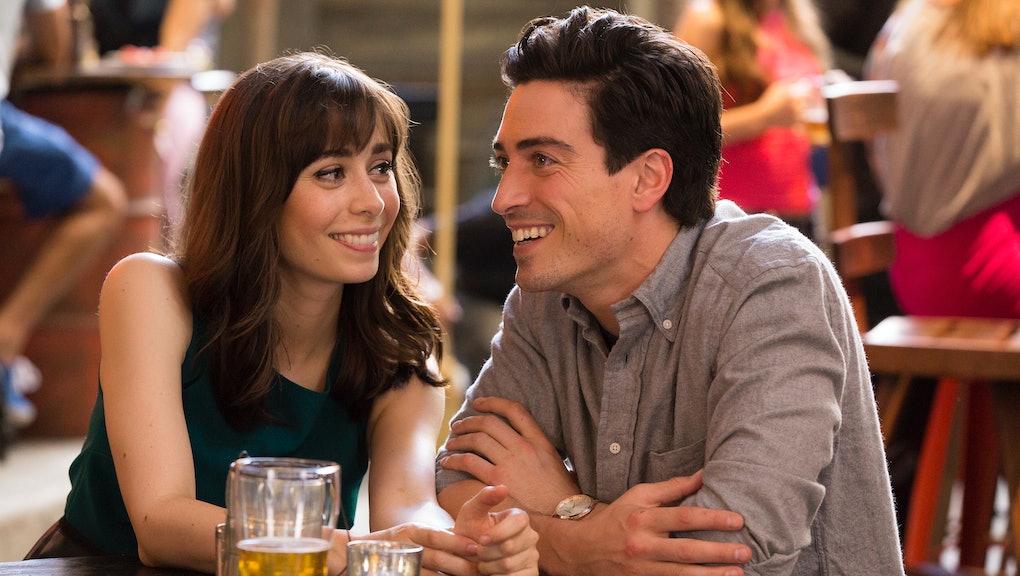 One medium's trash is truly another medium's treasure. Just as Hollywood was finally beginning to deconstruct the conventions and stereotypes of the romantic comedy, television has bought into those same tropes wholesale with three new shows in a traditional rom-com style: NBC's A to Z  (essentially a serialized 500 Days of Summer) NBC's Marry Me (following the misadventures of a couple struggling to tie the knot) and ABC's Manhattan Love Story (the Platonic ideal of a Nora Ephron movie).

After taking chances on refreshingly smart sitcoms like New Girl and Community that focus on the dynamics of modern friend groups, network television is returning to a timeless classic: one affluent white heterosexual man, one affluent white heterosexual woman and the seemingly random series of coincidences and musical montages that inevitably bring them together. The age of the vapid rom-com sitcom is in full swing.

The shows provide an unsettling glimpse at the old-fashioned way in which television still expects men and women to act. In fact, here are five beliefs we'd still have about gender if this fall's sitcoms were reflective of cultural reality instead of being bizarre artifacts from the bygone era of the rom-com.

The pilot of Manhattan Love Story opens with our leading man Peter walking the streets of New York City, asking himself in an internal narration whether he'd sleep with the women he passes: "Yes. Yup. Yes. Eh. Ooh, I think I already did!"

When Peter goes on his first date with Dana (our leading lady), he can't help but ogle her cleavage and think to himself, "Totally going back to my place. When was the last time I washed the sheets?" Peter is physically incapable of focusing on anything other than sex for longer than five seconds at a time.

In the A to Z trailer, our leading man Andrew and his wingman instantly descend on our leading lady Zelda the moment she walks in the door of his office in a blatant attempt to pick her up.

Like all men, these television rom-coms teach us, Peter and Andrew spend every waking moment thinking about and pursuing sexual intercourse.

While men are constantly consumed by conjugal thoughts, women only have eyes for Dolce & Gabbana. In Manhattan Love Story, Peter walks down the street scoping out hot female New Yorkers while Dana, on the other hand, lusts after the bags of the women she walks past: "Hello, gorgeous! I don't believe we've met but now I have to have you."

Unlike men, women in romantic comedies don't have a sex drive in the traditional sense. Instead, as Freud might say, women's attraction to men is actually just sublimated attraction to shoes and designer handbags.

In her natural state, a woman is either crying or yelling. In the Manhattan Love Story pilot, for instance, Dana spends her first date with Peter sobbing uncontrollably and hiccuping to the point that she has to end the date early.

In the trailer for Marry Me, we see Annie fly off the handle in an extended rant about Jake's friends and family. As we all know, estrogen is an unforgiving hormone that makes it impossible for women to participate in conversations with other humans without completely losing control.

4) ... and men are gay and/or effeminate if they show a sensitive side.

In the trailer for A to Z, Andrew is presented as a "guy's guy" who likes "sports and Liam Neeson movies."

"But Andrew has another side," the narrator intones before the trailer cuts to him in a hybrid car singing Celine Dion with a coffee cup for a microphone. Singing? Drinking a latte? Saving the planet? No guy's guy would be caught dead doing any of those innately feminine things.

The pilot for Manhattan Love Story takes this stereotype to its logical conclusion when Dana spots Peter crying on the ferry ride to the Statue of Liberty.

"Is he crying?" Dana thinks to herself. "Great. Just when I start to like him it turns out he's gay." She's right: The ability to express genuine human emotion and homosexuality are the exact same thing. As soon as a single tear rolls down a man's cheek, he's gone gay and there's no turning back.

5) Women crave children and commitment above all else.

What sends Annie into a fit in the Marry Me trailer is the fact that Jake has not proposed to her yet: "Do you not love me? Then please free me while I still have one egg." Much like real-life women, the women of television rom-coms will literally die from unrealized potential if they do not get to have babies.

And in the tag at the end of the Manhattan Love Story pilot, Dana changes her relationship status on Facebook after her first date with Peter in order to make herself appear more available to him. Because even though Peter is kind of an asshole, he managed to successfully take her on one date and that means, of course, that she wants to be his forever.

Dear network television, please don't take us back to the Stone Age of the romantic comedy. And please think about the gender stereotypes you're perpetuating before you replace all of our favorite shows with these clichés.