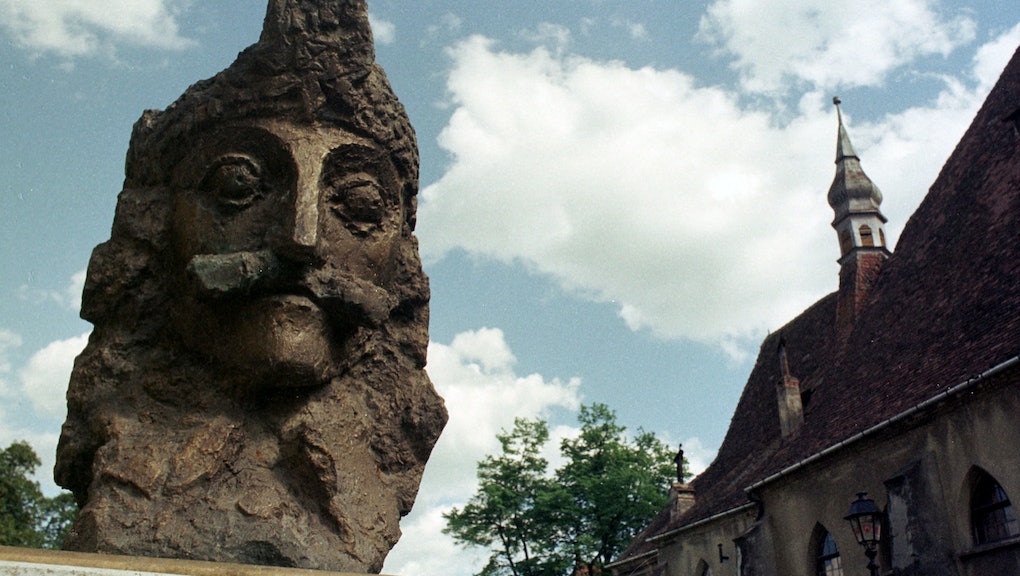 We now know where "Dracula" spent his early years.

Archaeologists working in Turkey believe they have found the dungeon and torture chamber where Dracula's historical counterpart, Wallachian Prince Vlad III "the Impaler," was kept during his imprisonment by the Ottomans.

While restoring the ancient Tokat Castle over the past 10 days, workers discovered a secret tunnel leading to the Pervane Bath as well as two well-hidden dungeons — one of which likely held the infamously cruel and vile tyrant.

According to archaeologists working at Tokat Castle, where Vlad was held in the 15th century, the site is appropriately spooky. From Hurriyet Daily News:

"We try to shed light on history with the structure layers we unearth," said archaeologist Ibrahim Çetin, who works on the excavations. He said that the team has found food cubes and an open terrace, as well as the military shelter and dungeons that were "built like a prison."

In 1442, then-prince Vlad was traded to the Ottomans along with his younger brother Radu as a hostage in exchange for Ottoman support for his father Vlad II Dracul's claim to the throne. Held in Tokat, the two brothers were treated well, but Vlad grew extremely jealous of Radu, who was given the title of cel Frumos or "Radu the Handsome." While Radu learned to interact pleasantly with his captors and befriended the Ottoman Sultan Murad's son Mehmet, Vlad was repeatedly punished by his captors.

Later, Vlad would assume the throne upon his father and older brother Mircea's death in 1447. Vlad quickly turned against the Ottomans, murdering envoys sent to secure his tribute and declaring Wallachia's independence. His rule was marked by constant war with the Ottomans and cruel — even by medieval standards — treatment of his enemies. One campaign in 1462 was especially disturbing; Vlad applied scorched-earth policy during his retreat from the Danube to his capital of Targoviste, launching constant attacks on Sultan Mehmet's tired and demoralized army. Repeated ambushes, including the infamous June 17 "Night Attack" on the sultan's camp, further weakened the resolve of the Ottoman forces. Many prisoners were taken. When they finally fought their way to Targoviste, Greek historian Laonicus Chalcondyles reported the gruesome sight that awaited the sultan on his arrival:

"We marched for about five kilometers when he saw his men impaled; the Sultan's army came across a field with stakes, about three kilometers long and one kilometer wide. And there were large stakes on which they could see the impaled bodies of men, women, and children, about twenty thousand of them, as they said; quite a spectacle for the Turks and the Sultan himself! The Sultan, in wonder, kept saying that he could not conquer the country of a man who could do such terrible and unnatural things, and put his power and subjects to such use. And the other Turks, seeing so many people impaled, were scared out of their wits."

However, his brother Radu allied himself closely with the Ottomans and later overthrew and imprisoned Vlad at his fortress of Poenari Castle. Vlad would later attempt to overthrow Radu's Ottoman successor Prince Basarab the Elder, but his reign lasted just two months before he was killed in battle. His head was sent in a barrel of honey to Constantinople to prove beyond all doubt that he was finally dead.

According to Ray Porter's article The Historical Dracula, a number of anecdotes sprung up in European circles surrounding Vlad III's horrifying capacity for cruelty. While Vlad certainly was renowned for his love of impalement, he was also said to have built his stronghold using the slave labor of his noble enemies and promoted loyal peasants to take their positions.

German and Russian pamphlets published after his death, likely a mixture of crass entertainment and Hungarian propaganda, exaggerated his evil. In one tale, Vlad was said to be so confident in his ability to inspire fear that he displayed a golden chalice unprotected in Tergoviste's town square that went unmolested. In another, when a visiting merchant was robbed of 160 ducats in Tergoviste, the prince ordered the money returned and the thief turned in by the end of the night — or he would destroy the city. It was. In the most gruesome tale, Vlad was said to have invited the sick and the poor of his domain for a massive feast, then burnt it down with all inside.

All of these horrible deeds, but most notably his penchant for impaling people, contributed to the legend of Vlad III's rule and his association with the modern legend of the vampire Dracula.

Today, Vlad is remembered as a folk hero and a defender of the realm to many Romanians, and the tales of his cruelty are almost certainly exaggerated. But in any case, archaeologists may have found the place where the man that would become known as Vlad the Impaler spent his formative years. No word on whether it contained a single, empty coffin.