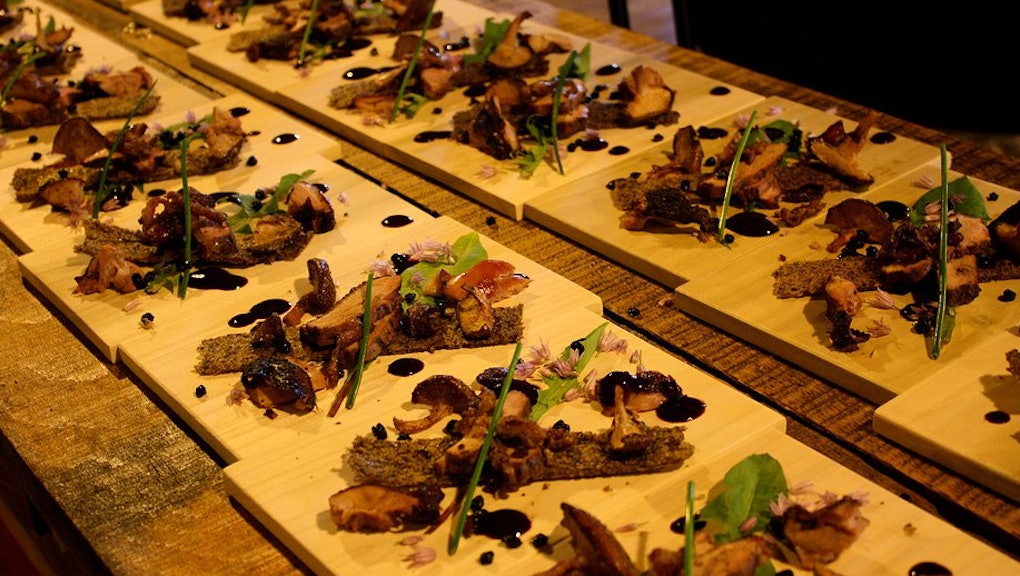 There are approximately 990,000 restaurants in the United States. The cuisines they encompass are staggering, from the noodle houses of Southern California to the clam shacks of New England.

It's a troubling absence, considering the historical context: broken treaties, land grabs and the confinement of Native peoples' ancestors to reservations where fresh groceries can be as rare as presidential visits.

Sherman is committed to building the menu around a "pre-reservation" diet. "If I was here 300 years ago but had my current set of skills, what would be in my pantry?" he said in an interview with Mic.

The results look incredible. Here's a visual sampling of the menu:

Background: Growing up on his grandfather's ranch on Pine Ridge, one of the nation's largest reservations, Sherman had regular access to fresh meat and produce. He also learned to hunt at an early age, getting his first shotgun when he was 8 years old.

But the chef is quick to admit his upbringing was atypical. "I was lucky," he told Mic. "Most of the families around us relied on canned and 'commodity' foods. There was one grocery store on Pine Ridge, otherwise you had to go into Nebraska or somewhere in Rapid City [South Dakota.]."

To complicate matters, Sherman says the Oglala Lakota people who populate the region developed their current food habits out of necessity. "They weren't farmers originally," he says, "That lifestyle was forced on them."

Today's lifestyle patterns attest to this: By 2007, 2.3 million acres of Pine Ridge lands were designated for agriculture, for a total of 463 farms.

"Wild foods": Sherman moved to Minneapolis in 1996 for its food scene and restaurant employment opportunities. By 2000, he had become a professional chef.

He's spent the past six years traveling the country, however, researching Native American cuisine and learning traditional methods of drying meats, grinding corn and gathering herbs and spices. He's also been active in Minneapolis' local and organic food scene, something which figures prominently in his vision for the Sioux Chef.

"Native foods are very regional," he says. "The particular region speaks very much to what its food identity is all about."

The Sioux Chef will draw influence mostly from the Lakota and Ojibwe food traditions, both of which are local to the upper Midwest.

The future: Aside from opening his restaurant at a permanent location — he's been doing a lot of catering, fundraising and cooking demonstrations lately — Sherman's long-term ambition is to foster a nationwide Native foods scene.

"The ultimate vision is to continue working with other established Native chefs and bring up the younger ones, too," he says. "It's not about just one restaurant. Native chefs around the country are pretty well connected, and we're all on sort of parallel paths right now."

Through organizations like the Native American Culinary Association, the indigenous food movement is rapidly gaining momentum in the restaurant world, with chefs like Sherman and Nephi Craig of the White Mountain Apache Tribe's Sunrise Park Resort restaurant in Arizona at the forefront.

It's an exciting movement to witness. And it's an important one, too, considering the tragic irony of America's original cuisine now being its hardest to come by.