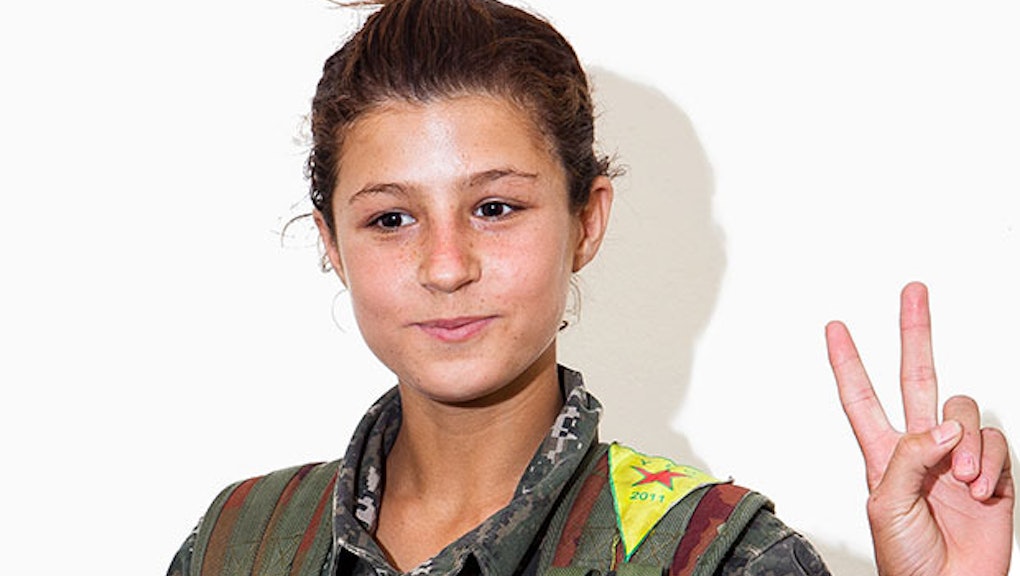 Marie Claire knows what an inspirational woman looks like. The leading international women's magazine frequently publishes profiles of strong, unique women who have struggled against adversity and made the world a better place. "Maybe one day you'll be profiled here, too," the magazine teases. "Because we know better than anyone that you're more than just a pretty face."

"They fight with weapons that are bigger and heavier than they are against a relentless enemy," writes Elizabeth Griffin. "And yet they continue to fight."

The two girls in question are Hevedar Mohammed, 12, and Mizguin Emraly, 14, photographed at YPJ bases in Syria and Kurdistan, respectively. The girls are both mugging for the camera. Hevedar wields a rifle alongside a massive grin.

The United Nations has facilitated the creation of a robust body of international public law in the service of reinforcing the rights of children in the past two decades alone. The Optional Protocol to the Convention on the Rights of the Child (OPAC), adopted by the UN General Assembly in 2000, "prohibits the recruitment or use in hostilities of under-18s by non-state armed groups" like the YPJ.

In 2003, UN Security Council Resolution 1460 required member states to enter into talks with the United Nations to establish "clear and time bound action plans to end child recruitment and use." And in 2007, the Red Cross' Paris Principles, formally endorsed by 58 states in France, established guidelines on "the disarmament, demobilization and reintegration of all categories of children associated with armed groups." In all of these international standards, the type of service, from cooking to killing, doesn't matter: that the YPJ recruits those as young as 12, as NBC News reports, violates this international standard.

This isn't the first time a women's magazine has missed the forest for the trees in Syria. In February 2011, Vogue published a glowing profile of Asma al-Assad, Syria's first lady. As Max Fisher wrote in 2012, the profile didn't make the splash Vogue intended:

In February, Vogue magazine published, for the benefit of its 11.7 million readers, an article titled "A Rose in the Desert" about the first lady of Syria. Asma al-Assad has British roots, wears designer fashion, worked for years in banking, and is married to the dictator Bashar al-Assad, whose regime has killed over 5,000 civilians and hundreds of children this year. The glowing article praised the Assads as a "wildly democratic" family-focused couple who vacation in Europe, foster Christianity, are at ease with American celebrities, made theirs the "safest country in the Middle East," and want to give Syria a "brand essence."Vogue's editors defended the controversial article as "a way of opening a window into this world a little bit," conceding only that Assad's Syria is "not as secular as we might like." A senior editor responsible for the story told me the magazine stood by it. A few weeks later, the article and all references to it were removed from Vogue's website without explanation. In August, The Hill reported that U.S. lobbying firm Brown Lloyd James had been paid $5,000 per month by the Syrian government to arrange for and manage the Vogue article.

The story of the YPJ is heroic, but it's irresponsible for Marie Claire to hold up young girls like Hevedar and Mizguin, adorned in camouflage and combat gear, as an "inspiration" to anyone. It does the fighting women of the YPJ— the ones over 18, as stipulated by international law — a disservice. While focusing on powerful women, magazines like Marie Claire and Vogue can't pretend that human rights don't exist.