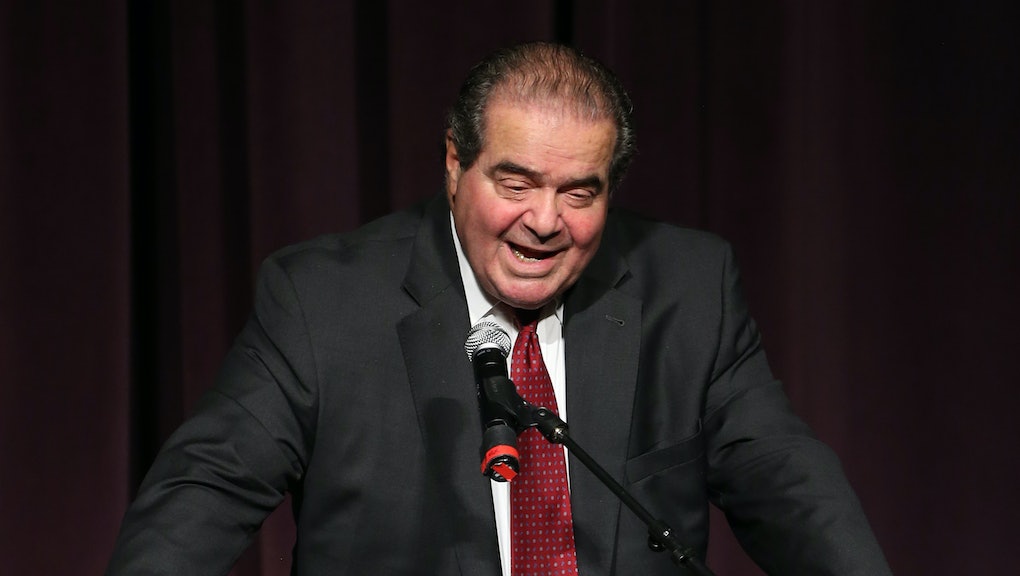 According to Supreme Court Justice Scalia, Freedom of Religion Isn't What You Think

Supreme Court justice Antonin Scalia gave a speech at Colorado Christian University this week that should have atheists — and anyone who's a fan of the separation of church and state — pretty worried.

"I think the main fight is to dissuade Americans from what the secularists are trying to persuade them to be true: that the separation of church and state means that the government cannot favor religion over non-religion," Scalia said, calling worries over religion in government "utterly absurd."

In other words, Scalia believes anyone who thinks religion should be kept out of government is just plain wrong. In fact, some religious traditions are a great part of what the government does.

"We do Him honor in our pledge of allegiance, in all our public ceremonies," Scalia said. "There's nothing wrong with that. It is in the best of American traditions, and don't let anybody tell you otherwise. I think we have to fight that tendency of the secularists to impose it on all of us through the Constitution."

The background: The debate over religion in government is made up of many smaller issues, including everything from prayer in public schools to local government nativity scenes. A strong Christian influence in government policy also affects plenty of larger issues like gay marriage and abortion access.

Just this past year, questions over government sponsorship of religion have come into play with Christian-influenced schoolbooks being distributed in Texas, an atheist airman being allowed to take his Air Force oath without saying "under God" and a Supreme Court majority (Scalia included) deciding that local governments can start meetings with prayers, even if they're specific to a certain religion.

That last decision gives a little window into Scalia's reasoning. Atheism isn't a religion, it's a lack of a religion, so "freedom of religion," for Scalia, doesn't mean the government can't praise God. And if that happens to be the God worshipped by Christians, well, that's OK.

More roadblocks: That a prominent government official (especially a justice like Scalia, well-known for his conservatism) would take this tack won't surprise many atheists.

Never mind public prayer; there are still eight states where atheists are legally forbidden from holding office. Luckily those laws aren't enforced, thanks to a 1961 Supreme Court ruling, though they remain on the books.

In many ways, atheists in America are almost treated like second-class citizens, with Scalia's recent quote adding to the sense of disdain for the non-religious group. It's not just a "general sense" either: There's hard data that points to this feeling towards atheists.

A 2012 Gallup poll found that 43% of respondents would refuse to vote for an atheist for president, making the group less trusted than any other in the poll. Another poll, from Pew, showed that more than half of respondents thought a belief in God was necessary to be moral.

With public opinion like that, it might be a long, long time before we see an openly atheist president, and maybe (or maybe not) just as long before someone in Scalia's position could admit the same thing.