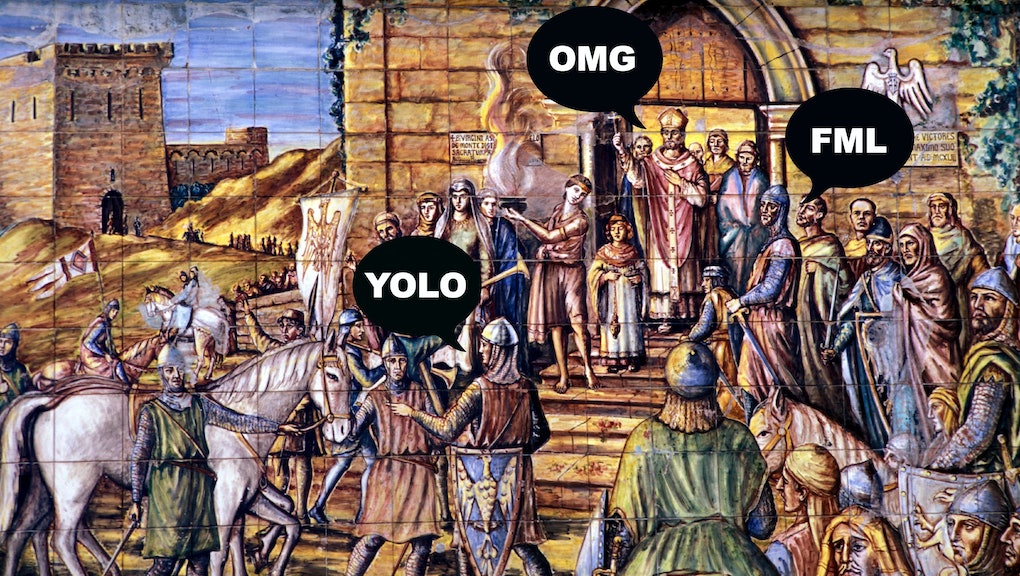 Why You Shouldn't Fear the Rise of Slang, in One Glorious Timeline

"It can still come as a surprise to browse through recent additions such as 'ohmigosh,' 'ooh-wee' and 'splosh' (tea) and then find the term that might encompass them all, 'slang,' defined sternly in its first sense as 'the special vocabulary used by any set of persons of a low or disreputable character,'" Lorien Kite wrote in the Financial Times in 2013. "Concern at the rising influence of the low and disreputable has, of course, been a constant theme in discussion of the state of English."

Here it is, a little bigger:

This is part of the natural evolution of language. When slang terms enter our cultural consciousness, they either fade away into oblivion and, often, become part of our linguistic catalogue, whether we like it or not. This has been happening for thousands of years. And, in fact, it may be happening faster than ever thanks to the rise of communications technology. Linguist Michael Erard explains:

Thanks to globalization, the Allied victories in World War II, and American leadership in science and technology, English has become so successful across the world that it's escaping the boundaries of what we think it should be. In part, this is because there are fewer of us: By 2020, native speakers will make up only 15 percent of the estimated 2 billion people who will be using or learning the language. Already, most conversations in English are between nonnative speakers who use it as a lingua franca.

So is the English language — and, in turn, human civilization — in fact doomed with the rise of "low and "disreputable" language in our modern vocabularies? As the editors of the Oxford English Dictionary might say: GTFO.