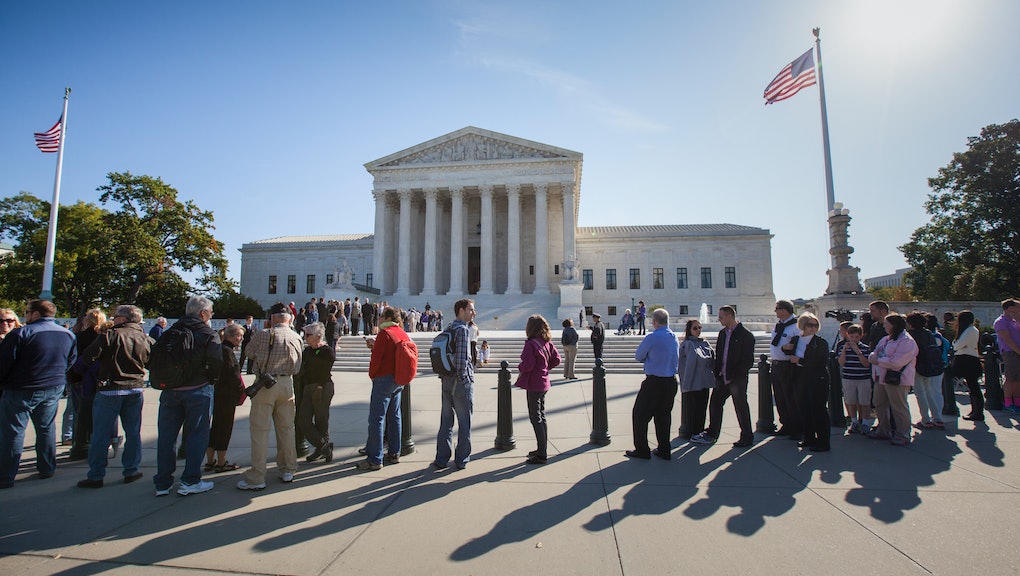 Today, the Supreme Court declined to consider cases challenging lower courts' decisions on same-sex marriage bans, immediately legalizing marriage equality in five states and paving the way for bans in six more states to be struck down in the coming weeks.

The court's decision was a surprise to court watchers, who assumed the court would wade into the latest legal battles over same-sex marriage. But the court's choice not to get involved — thereby legalizing marriage equality in 11 states by default — makes more sense in the context of the sweeping change in public opinion toward the legality of same-sex marriage in recent years.

As the Washington Post's Chris Cillizza noted, "the fight over gay marriage is effectively over in this country," at least as far as the public is concerned. Public opinion polls have documented a monumental shift in attitude over the past few years, with a clear majority of Americans now supporting same-sex marriage:

Support becomes even starker when broken down along generational lines. In a Pew Research Center report earlier this year, 68% of those born between 1981 and 1995 supported same-sex marriage, compared with 38% of those in the oldest generation:

Such is the case when it comes to gay marriage: The legal system is closing in on cultural shifts that have taken hold over the past few years. The court's recent game of catch-up arguably started with its 2013 decisions striking down the Defense of Marriage Act and declining to rule on California's Proposition 8, both of which were major victories for proponents of marriage equality.

So, don't be surprised by the court's decision (or lack thereof) Monday. When seen through the lens of shifts in public opinion and earlier decisions, its choice is the just latest step in catching up to the rest of the country.