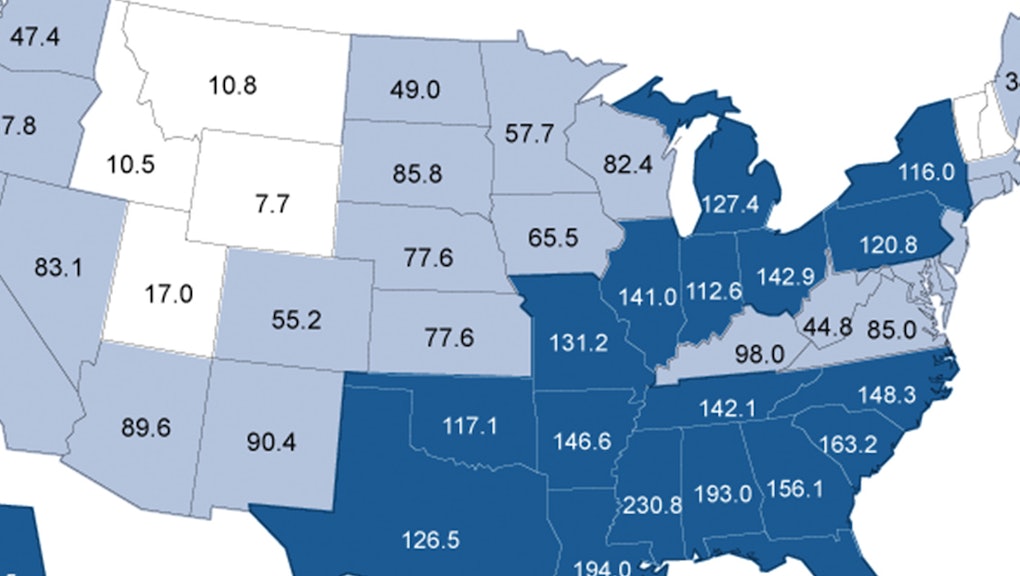 Which State Has the Most STDs? Check These Maps

Sexually-transmitted diseases are more common in America than you think.

According to Centers for Disease Control and Prevention data, approximately 20 million new sexually transmitted infections are reported each year, split between eight commonly transmitted conditions: HPV, chlamydia, trichomoniasis, gonorrhea, genital herpes, syphilis, HIV and hepatitis B. LiveScience reports the CDC's best estimate is that 110 million Americans, or about 1 in 3, suffer from these conditions at any particular moment. And the infections cost around $16 billion to treat each year.

It's what LiveScience calls America's "hidden STD epidemic." The most recent estimates are from 2012, and the CDC illustrated the problem in several squick-inducing graphs below. They likely underestimate the problem, as only a fraction of cases are reported to the federal government. Young people in the 15-24 age range are particularly vulnerable, receiving a disproportionate 50% of all new infections.

Chlamydia is even more common, with a national rate of 453.5 infections per 100,000 people. But much of the country soars well above that rate, like New York's rate of 517 infections per 100,000 and Mississippi with 774. Most of the South, Southwest and mid-Atlantic fares poorly. It's pretty bad — the CDC reports that "This is the largest number of cases ever reported to CDC for any condition."

Then there's syphilis, which actually comes with some good news: It's comparatively rare, with an incidence rate of 5.1 per 100,000.

Similar regional trends were observed for other STDs, like herpes and HPV.

U.S.T.D: So yes, it seems certain regions of the country have serious problems with STDs. But knowing is half the battle. The CDC data raises awareness of elevated levels of STDs so people can seek proper testing and treatment. For example, a government report from June estimated that up to 400,000 out of the 1.8 million people with chlamydia don't know about it.

The same report also found that STDs disproportionately affect minorities: Black teenage girls who are sexually active have an 18.6% chance of having an STD, while white teenage girls have a rate of 2.4%. The CDC adds that in 2012, the chlamydia rate was 6.8 times higher for blacks than whites.

Prevention: An awful lot of people aren't getting the tools and resources needed to protect their sexual health, and the problem is much worse for vulnerable populations like minorities and young people who may not have consistent access to health care. While the topic is unpalatable, the plateauing of progress fighting STDs means state and local health officials needs to do better a job of informing young people of the risks of unprotected sex. Some states, particularly in the Sun Belt, are doing worse than others.

In the meantime, use protection. But be aware condoms aren't 100% effective at preventing transmission, so get tested regularly. And maybe use a Scroguard.