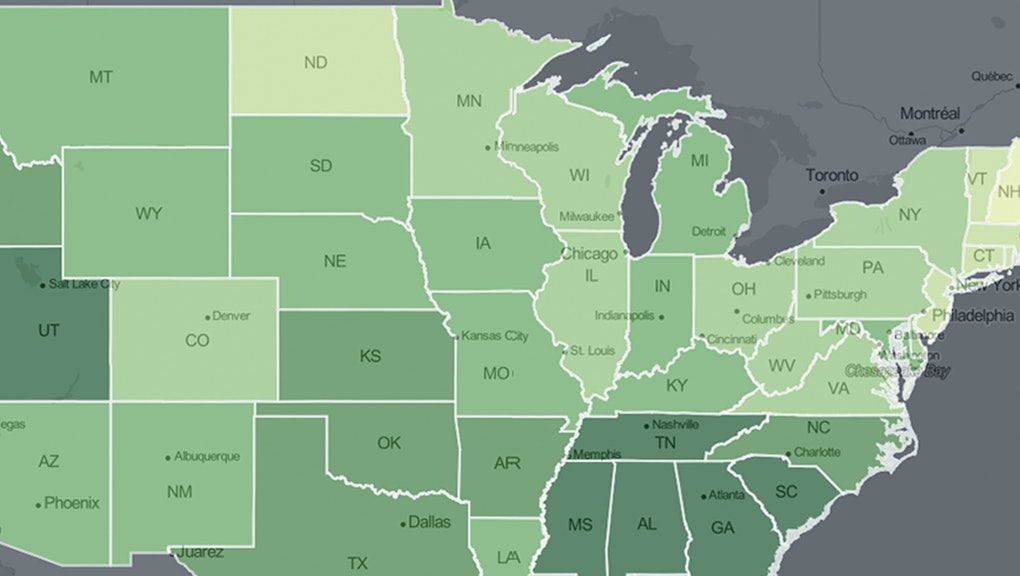 The Most Generous States in America, in One Map

The news: It's long been thought that while conservatives are against the idea of a welfare state, they tend to be more giving to charitable causes, and a new study on U.S. philanthropy backs up this idea of "compassionate conservatism."

This week the Chronicle of Philanthropy published an analysis of Internal Revenue Service (IRS) data, which revealed that the 17 most generous states — where people donated the highest percentage of their income — all voted for Mitt Romney in the 2012 election, whereas the seven least generous states voted for President Barack Obama.

As you can see in map below, red states tended to be more giving more of the green than blue states:

(You can also click here to access the interactive version, which allows you to view the data by counties and ZIP codes and also lets you filter by income range, religion, race, age range and political leaning.)

The Chronicle didn't provide an explanation for this trend, but it sure seems like people who prefer individual giving to social welfare are putting their money where their mouth is.

"Not to be too simplistic about it, but if you believe that government should take care of basic social services, then you're going to go that way," Chronicle editor Stacy Palmer told the International Business Times. "If you think charities should take care of things, and not government, then you're probably going to give more generously to charity."

1. The average American donates about 3% of their income to charity.

3. Still, wealthy Americans contributed $77.5 billion to charity in 2012, which is nothing to sneeze at.

And the top 10 most charitable cities were: