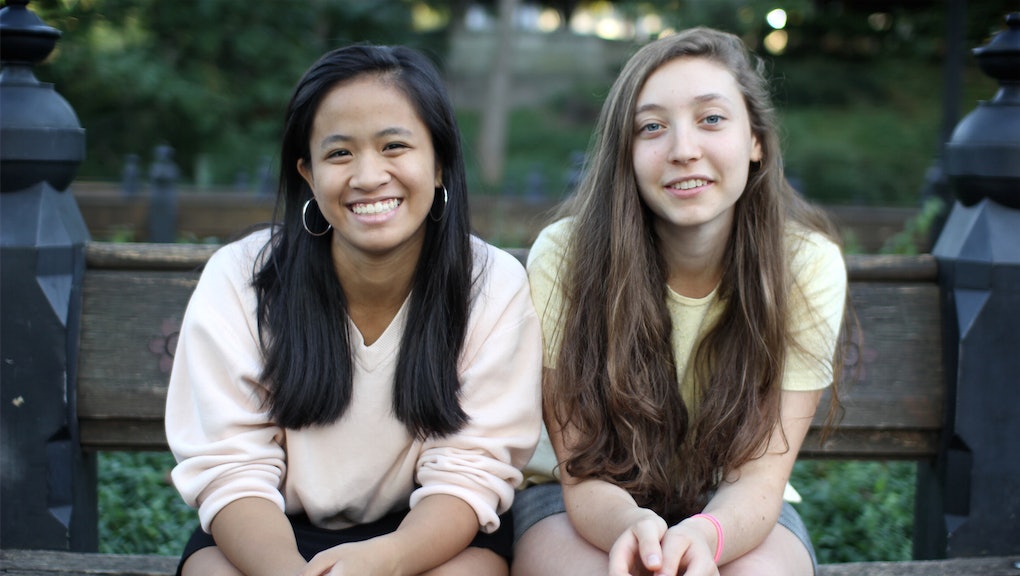 The game, Tampon Run, is proving to be so successful, its creators spent last Saturday and Sunday coding a mobile version of the game. That’s right: An app called Tampon Run is coming to your iPhone.

The game takes a whole different approach to first-person shooters. The main character runs down the street firing tampons at her enemies, leaping over their heads to collect more when she runs out. The goal isn’t to build an arsenal and go all Rambo, however; it’s to challenge the idea that in society, we’re more comfortable with guns and violence than we are with teaching girls to be comfortable with their bodies.

New Yorkers Sophie Houser, 17, and Andy Gonzales, 16, created it last summer as part of the Girls Who Code summer immersion program, which aims to school at least 1 million young women in computer science by 2020. Houser and Gonzales are receiving wildly positive feedback and say the game has been played more than 100,000 times online.

“One of the most incredible things is that with a little bit of code and the Internet, some girls in New York can make something that can reach people around the world,” Houser told Mic in an interview.

One fan of the game wrote them:

Great job on coding your game! I showed it to my high school intro computer science class today and they loved it, both the message you are promoting and playing it. I teach in an all-girls school so I think it meant a lot to them to see you putting this game out there.

The friends met at Girls Who Code and decided to build a game with a social mission. Gonzales wanted to develop something with a feminist twist and initially thought of parodying the hypersexualization of women in video games. As they were developing their concept, Houser joked that they should have a character throwing tampons at people. After a good laugh, the two realized that was exactly what they should do. They wanted to challenge perceptions about women and things we’re not comfortable talking about, but should be.

“It’s something we’d both experienced,” said Gonzales. “It’s a problem in Western countries and around the world. People don’t want to talk about periods. In other countries, women have to isolate themselves.”

Unusual video games that challenge social norms — and the fact that a pair of young women built Tampon Run — are a powerful reminder of the opportunity in tech and gaming. Males and females play video games about equally, yet video game developers are 76% male. The Entertainment Software Association’s 2014 report offers some interesting statistics on who gamers really are.

Image credit: Entertainment Software Association. Data is based on ESA’s 2014 report on the gaming industry.

“I don't think there were any guys thinking about making a tampon game,” said Houser. “By having a lot more diversity [in the industry], it means the ideas and the products that come out of it will relate to a lot more people.”

It’s a big blind spot for many game developers.

Girls Who Code is one of several programs now available to young women to help get them into the space. Others, like Black Girls Code, Girl Develop It, Girls Rock on the Web, Girls Make Games and others are helping to develop pipelines to offer mentorship and get more girls into tech and gaming. And it’s working.

“I’m not sure what I actually want to do [for my career],” said Houser, “but I love the experience of using code to create social change. It’s empowering and exciting.” She had never coded before last summer.

In their own way, these two young women are carrying on an incredible tradition of women in gaming and tech. Some of the earliest and most powerful innovations in the industry were developed by women, from the 19th-century inventor of computing herself, Ada Lovelace, to Carol Shaw and Janese Swanson, who built seminal video games like River Raid for Atari and Carmen Sandiego. Houser and Gonzales are now helping to define a new future for women in the industry and after going through Girls Who Code, both want to mentor younger girls that want to get into tech and gaming too.

When the Tampon Run app makes it to the iTunes store, expect some game play improvements. Houser and Gonzales are building out the main character’s arsenal beyond tampons by, among other things, giving her super-absorbent maxi pads to throw.

“I'm trying to figure out a couple things with the game logistics, but it's there!” said Gonzales.

Another upcoming improvement for Tampon Run is a jetpack for the female main character. Given these two developers’ bright prospects, it’s a fitting touch.