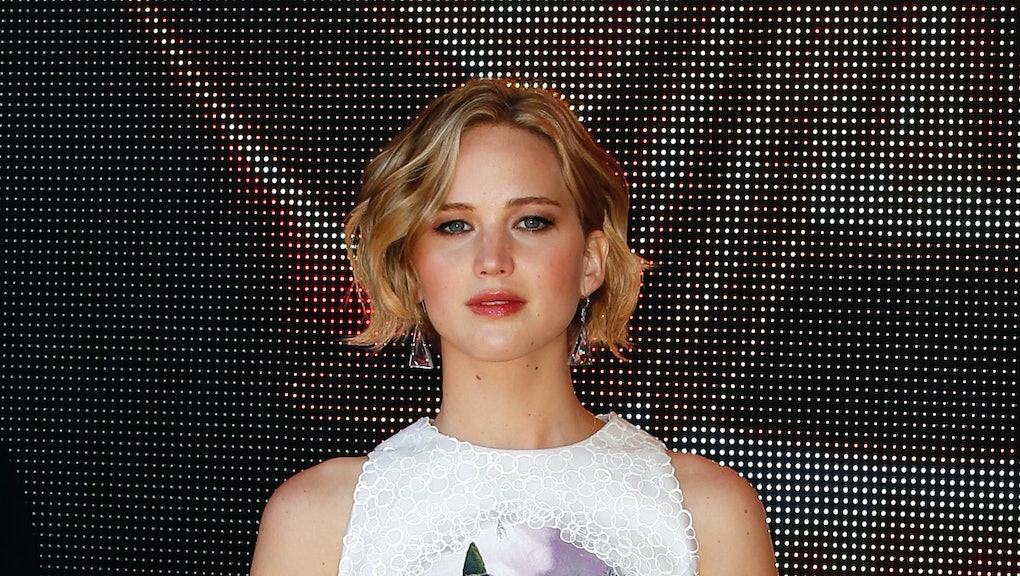 "It's my body, and it should be my choice, and the fact that it is not my choice is absolutely disgusting."

Jennifer Lawrence has broken her public silence on the massive nude photo leak that targeted her and hundreds of other female celebrities more than a month ago. The Hunger Games actress appears on the cover of Vanity Fair's November issue, and spoke at length about the incident with the magazine.

Lawrence added that she nearly released a statement when the leak happened, but everything she came up with made her too upset.

"I started to write an apology, but I don't have anything to say I'm sorry for," she said.

Lawrence gets right to the heart of the matter. "Anybody who looked at those pictures, you're perpetuating a sexual offense," she told Vanity Fair. "You should cower with shame."

She also highlighted a troubling fact — that the invasion of privacy wasn't confined to random people on the Internet.

"Even people who I know and love say, 'Oh, yeah, I looked at the pictures' — I don't want to get mad, but at the same time I'm thinking, 'I didn't tell you that you could look at my naked body,'" she said.

Her critical comments echo many of those in media, as well as those made by other celebrities involved in the leak.

"[A female celebrity] puts herself in the public eye and, in turn, we are entitled to see as much of her as we so desire, or so I am sure the justification goes," Roxane Gay wrote in the Guardian.

Lawrence didn't mince words for those responsible, either. "Just the fact that somebody can be sexually exploited and violated, and the first thought that crosses somebody's mind is to make a profit from it," she said. "It's so beyond me. I just can't imagine being that detached from humanity. I can't imagine being that thoughtless and careless and so empty inside."

The arguments will undoubtedly continue to pile up that celebrities don't deserve privacy, or that they're secretly benefitting from it or that they deserved it. Lawrence proves, however, that those arguments miss the point. Celebrities or not, these people are real women. They deserve better.