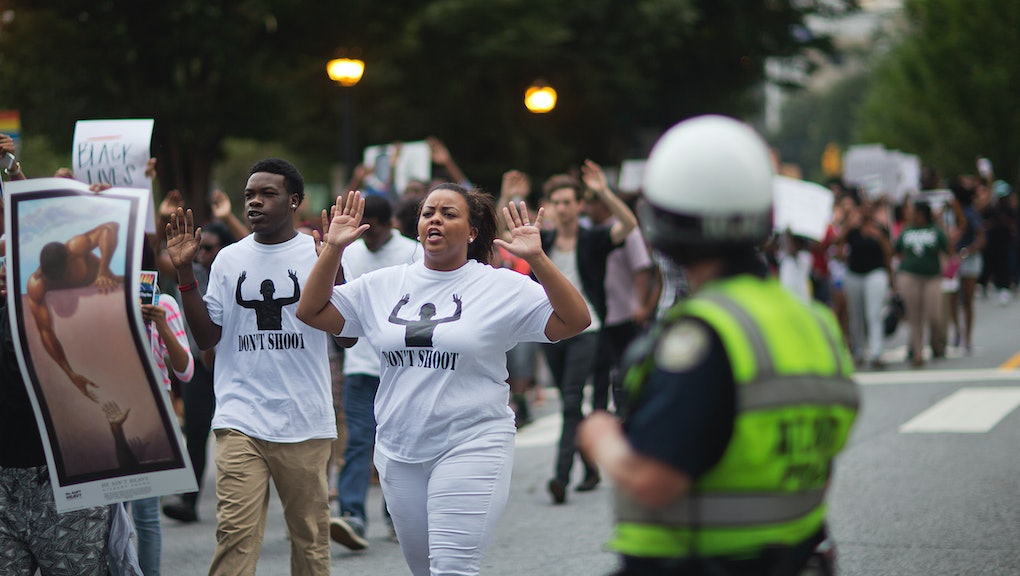 Since the murder of 18-year-old Michael Brown in early August, protesters and demonstrators in Ferguson, Missouri, have met a heavy-handed police response, but some of their especially questionable and arguably unlawful tactics are finally being reigned in.

U.S. District Judge Catherine Perry issued an injunction against the St. Louis County police, ordering them to stop their enforcement of the "keep moving" rule, in which protesters could be arrested for stopping and standing still on the sidewalk. This was also known as the "five-second rule," since that's how long you could stop before an arrest was made.

"Although the state has a valid interest in maintaining order on its streets and sidewalks and in preventing violence by crowds, this interest is not sufficient to apply such a blanket rule to people assembling peacefully," Perry wrote in her ruling. "The rule provided no notice to citizens of what conduct was unlawful, and its enforcement was entirely arbitrary and left to the unfettered discretion of the officers on the street."

The background: The injunction came after the ACLU filed a lawsuit against the police force on behalf of protesters who had been arrested under the rule.

The cops drew ire for a seemingly broad application of the rule. Protesters had to help elderly companions keep up, lest they stop for too long. Even members of the media were told they had to keep moving unless they were in a dedicated press area.

The ACLU called the injunction a "huge win," with the group's Missouri legal director Tony Rothert saying, "Vague rules that are applied in a haphazard fashion tend to increase community tension."

What it means: Enforcing a "keep moving" rule was one of the tactics police believed would keep the peace during protests they argued would have otherwise turned chaotic or dangerous. But, as the lawsuit and the injunction note, a protest atmosphere does not give law enforcement free rein to make arrests. That is, the Ferguson police force cannot single-handedly declare martial law.

While the police said the rule was only in place for crowds that got "dangerously large and unruly," Perry wrote that it was actually applied by officers whenever they felt like it. The injunction, it should be noted, only applies to the St. Louis County force.

So if you're out in a protest, keep this in mind if police threaten to arrest you for standing still on a public sidewalk. It may not do much good in the moment — it's the rare officer who will stop and listen to you explain federal court precedent — but you could very well have a case to make later.