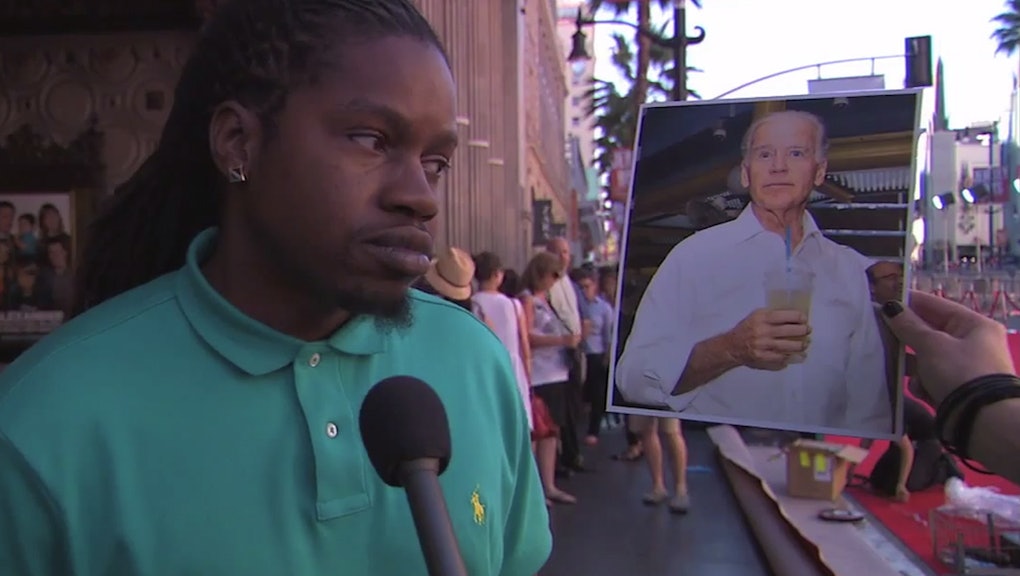 Jimmy Kimmel Discovers No One Knows Who Joe Biden Is

Do you know who Joe Biden is?

If you do, congratulations, you know more about government than pretty much everyone featured in the Jimmy Kimmel Live! man-on-the-street segment, which asked people to identify America's vice president to much wailing and gnashing of teeth. The crew even went so far as to provide people with a photograph of Ol' Diamond Joe, which didn't actually seem to help things along.

The responses, all from Americans, ranged from blank confusion to some pretty far-out guesses, though the winner was probably the young man who thought Biden was a "terrorist group." One dude, who freely admitted he was "really fucking stoned," said he was the "old dude" in Pineapple Express. The closest guess was "assistant president," which is kind of right.

To be fair to the general public, the vice presidency is so notoriously unimportant that Franklin D. Roosevelt's vice president, John Nance Garner, referred to the position as "the worst damn fool mistake I ever made." Truman referred to vice presidents as "about as useful as a cow's fifth teat." Daniel Webster, a prominent Massachusetts senator and later Secretary of State in the mid-1850s, refused the position, saying, "I do not propose to be buried until I am really dead and in my coffin." But you should probably still know who the current one is, in case something terrible happens.

While the segment was clearly edited to show the most clueless of at least a few dozen interviews, the Washington Post's Jaime Fuller points out that a Pew Forum survey from 2010 concluded just 59% of Americans knew Biden is the vice president. A much more recent survey of 1,416 adults from the Annenberg Public Policy Center found that many Americans were alarmingly uninformed on simple questions about how government functions:

While little more than a third of respondents (36%) could name all three branches of the U.S. government, just as many (35%) could not name a single one.

Similar results were echoed in a Johns Hopkins survey, which found that policymakers were immensely skeptical about the public's ability to hold informed opinions on current events, with over half saying average citizens have "very little" understanding of almost every given issue. Clearly the joke is only funny if you know who Biden is. But it doesn't look like the Jimmy Kimmel Live! crew had to look very hard to find a bunch of people who don't know who our emergency backup president is, let alone whether he breaks tie votes in the Senate.

Ah, well. Kimmel might actually be on to something. This is, after all, the country where more people believe in angels than global warming.