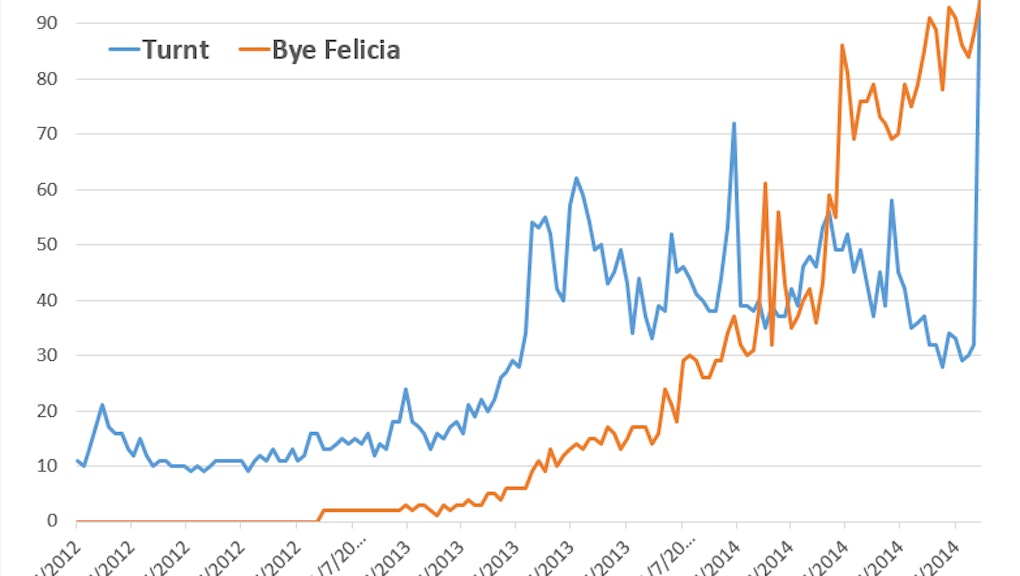 It's Official: America Is at Peak Turnt

America is officially all turnt up.

That’s according to a very scientific analysis of English slang word popularity conducted by Mic.

The analysis relied on Google Trends, which gives search terms a score between 0 and 100, with 100 meaning peak popularity.

So, are we still twerking and YOLO-ing like we used to? Was that party last weekend ratchet, or was it cray cray?

Check out the charts below to answer these burning questions. For those who aren’t always sure what a word actually means (no shame), definitions from Urban Dictionary are included.

Bye Felicia (phrase) — A reference from the 1995 film Friday that has recently gained mainstream recognition. “When someone says that they're leaving and you could really give two shits less that they are”

Twerk (verb) — The rhythmic gyrating of the lower fleshy extremities, in an up-down or side-to-side motion, often involving hip thrusts and a low, squatting stance.

Swag (noun) — “Originally from the Scottish slang word ‘swagger,’ which was a description of the way some Scots walk (in a swaying motion), the word was then misinterpreted by the English as ‘the way someone presents themselves,’ e.g., whether someone looks cool.” Swag may also refer to branded merchandise, sometimes handed out for free.

Werk (verb, noun) — “a congratulatory declaration of support, praise or approval, for an outstanding achievement in any area of life”