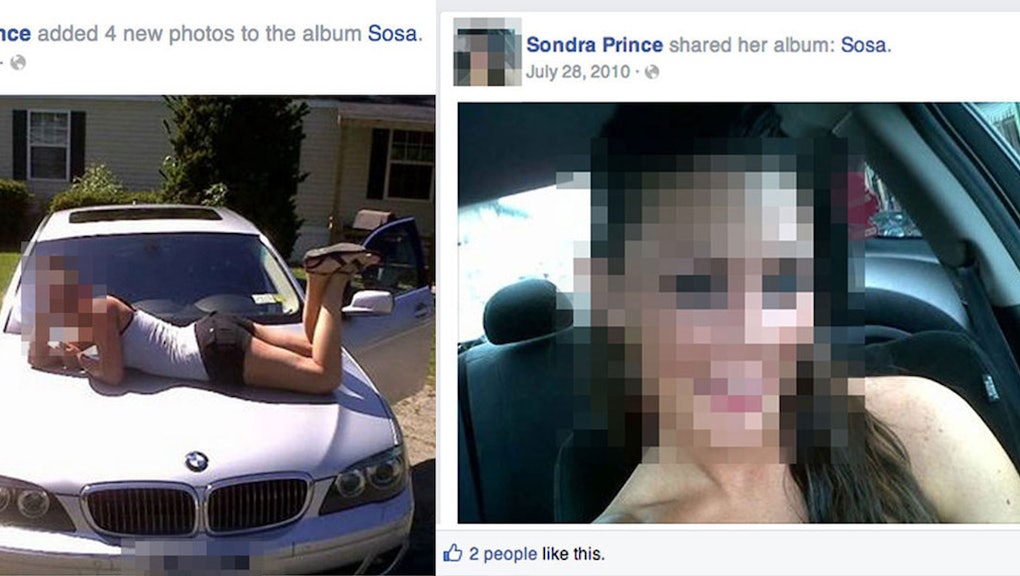 Do the feds have the right to impersonate you online if you're a criminal (or if they just think you are)? The Justice Department certainly seems to think so, according to an ongoing legal battle over their use of a counterfeit social media profile that used seized cell phone photos of suspected drug dealer Sondra Prince (now Sondra Arquiett) to snare members of a New York narcotics ring.

Arquiett first noticed the online impersonation when a friend asked her why she was posting scantily-clad photos of herself to a public profile. The screenshots below were obtained by BuzzFeed News' Chris Hamby, though the most problematic photos were pulled from the account at some point.

Hamby reported that U.S. Drug Enforcement Administration Special Agent Timothy Sinnigen set up the account after Arquiett was arrested on allegations that she was part of a drug ring. He writes:

A judge, weighing evidence that the single mom was a bit player who accepted responsibility, ultimately sentenced Arquiett to probation. But while she was awaiting trial, Sinnigen created the fake Facebook page using Arquiett's real name, posted photos from her seized cell phone and communicated with at least one wanted fugitive — all without her knowledge.

Is that allowed? We'll see. Arquiett is suing Sinnigan and the DEA in federal court for violations of her constitutional rights, and claims the fake account put her in unnecessary danger.

Her complaint alleges that Sinnigan illegally caused "fear and great emotional distress" by interacting with dangerous drug dealers with the fake profile, as well as posting "photographs of the Plaintiff in her bra and panties." Arquiett claims redress under the First, Fifth and Eighth Amendments, and the Associated Press reports that she's seeking $250,000 in damages.

The feds aren't denying any of this, exactly. The Justice Department claims that creating the fake profile was totally legal, since her role in the drug ring made her a suspect and her voluntary surrender of her cell phone meant its contents were fair game. According to the DOJ's court filings:

Defendants admit that Plaintiff did not give express permission for the use of photographs contained on her phone on an undercover Facebook page, but state the Plaintiff implicitly consented by granting access to the information stored in her cell phone and by consenting to the use of that information to aid in an ongoing criminal investigations [sic].

The Facebook account was set up in 2010, and is still accessible to the public. Arquiett didn't plead guilty until February 2011, and she eventually was released with time served and a few years of probation. Facebook's community standards prohibit fake profiles, though that might not affect the case.

"If I'm cooperating with law enforcement, and law enforcement says, 'Can I search your phone?' and I hand it over to them, my expectation is that they will search the phone for evidence of a crime," Electronic Frontier Foundation staff attorney Nate Cardozo told the AP. It is "not that they will take things that are not evidence off my phone and use it in another context."

"I may allow someone to come into my home and search, but that doesn't mean they can take the photos from my coffee table and post them online," University of Pennsylvania law professor Anita L. Allen told BuzzFeed.