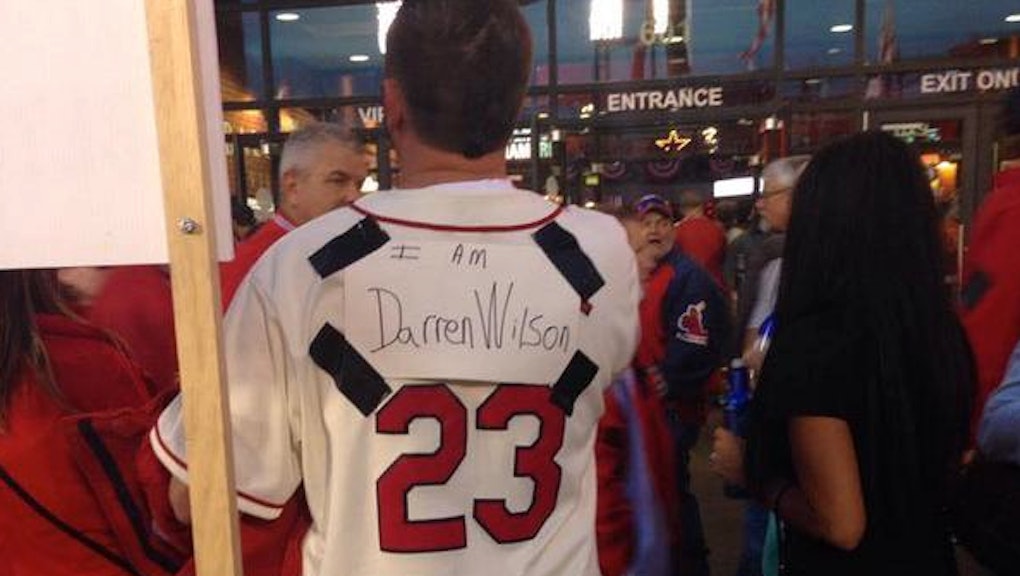 It's hard to pinpoint exactly when St. Louis Cardinals supporters took on the nominal title of Best Fans in Baseball, but there's no question it's made them a target of disdain among unaffiliated observers.

The Wall Street Journal named the Cardinals the most hateable team of the 10 clubs in this year's playoffs, and the Twitter feed Baseball's Best Fans (@BestFansStLouis) exists solely to puncture that cornpone myth by dredging up the worst slurs, epithets and hate speech from the St. Louis faithful.

It's not as if baseball fans outside St. Louis needed another reason to dislike Cardinals fans. But on Monday, they got one.

A clash between Cardinals supporters and Ferguson protesters outside Busch Stadium turned ugly before Game 3 of the American League Division Series against the Los Angeles Dodgers.

Deadspin's exhaustive catalogue of lowlights includes a smattering of racially charged language and a "Let's go, Cardinals!" chant that turns into a "Let's go, Darren!" chant (at the 2:40 mark).

The tense protest, which the team said prompted an increased security presence, remained peaceful throughout.

The demonstration took place two days after a performance of the St. Louis Symphony was interrupted by protesters serenading the audience with a civil rights song dedicated to Michael Brown.