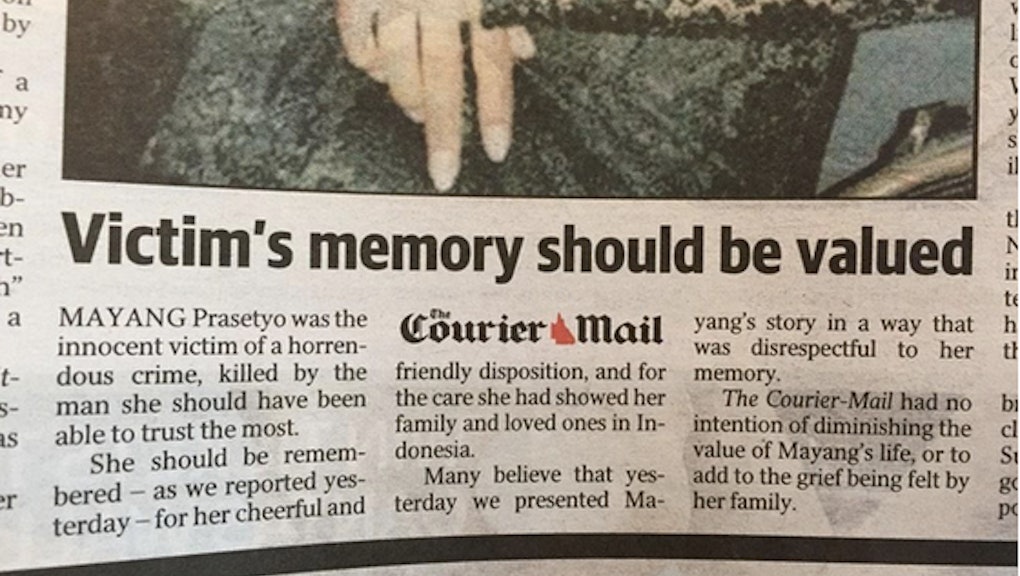 Sensationalized, transphobic reporting is nothing new in media, but Rupert Murdoch's Courier-Mail hit an all-time low with its piece on the homicide of a transgender woman in Australia.

The paper paired the murder-suicide of the victim, Mayang Prasetyo, and her boyfriend, Marcus Volke, with two distasteful headlines: "Monster Chef and the She-Male" and, inside, "Ladyboy and the Butcher."

Prasetyo was born in Indonesia but was living in Brisbane with Volke, whom friends say she married in 2013 (although the marriage was not legally recognized in Australia). According to the Independent, police were called to Volke's apartment Saturday night after neighbors complained of a bad smell. Officer discovered Volke, who was allegedly in the process of "cooking" some Prasetyo's body parts in chemicals. Volke escaped the police but was found later, "in an industrial bin, where he appeared to have taken his life."

The savage nature of the crime did not seem to faze Courier-Mail editors, who treated the tragedy as another chance to splash a woman in a bikini on the cover. Not surprisingly, readers responded with immediate outage, expressing their anger on Twitter and with a Change.org petition, which has garnered more than 25,000 signatures.

Members of the Brisbane trans community are pressing the Courier-Mail to make a formal apology and "request[ing] that future articles relating to the transgender and sex worker communities are in line with [its] Code of Conduct," which requires the paper to "not make pejorative reference to a person's race, nationality, color, religion, marital status, sex, sexual preferences, age or physical or mental capacity."

The petitioners also ask the paper to "run an article about the prevalence of gender-related violence in Australia and worldwide, with the latest statistics showing 1,509 reported murders in the last six years."

The Courier-Mail acknowledged the petition through a tepid apology Wednesday, titled "Victim's memory should be valued." The editorial does not apologize for its transphobic language. Instead, it seems to congratulate the paper on its reporting, noting Prasetyo should be remembered "for her cheerful and friendly disposition":

"Mayang Prasetyo was the innocent victim of a horrendous crime, killed by the man she should have been most able to trust.

People are not buying it.

According to the Guardian, the Courier-Mail's editor is coming under increasing fire on social media, but has not received as many complaints from the paper's readers. The Guardian noted that a handful of other publications, from the Daily Mail Australia to the Daily Record in Scotland, also resorted to transphobic language, proving the extent to which transphobia permeates the global media landscape.

Words carry weight, even more so when circulated by a news empire like Murdoch's. When it comes to violence, there is no greater targeted group worldwide than trans women of color. Pedestrian, citing the Trans Violence Tracker, reports that while estimates put the trans community at not more than 1.5% of the world's population, its members are still "about 400 times more likely to be assaulted or murdered than the general population." In the United States, transgender women of color are at a disproportionately high risk of targeted violence, according to a report from the National Coalition of Anti-Violence Programs.

The Courier-Mail needs to do better. Claiming it "had no intention" of using offensive transphobic language is an abdication of it ethical journalistic responsibility. At no point in the editorial process does it appear that anyone had the sense or the decency to speak up.