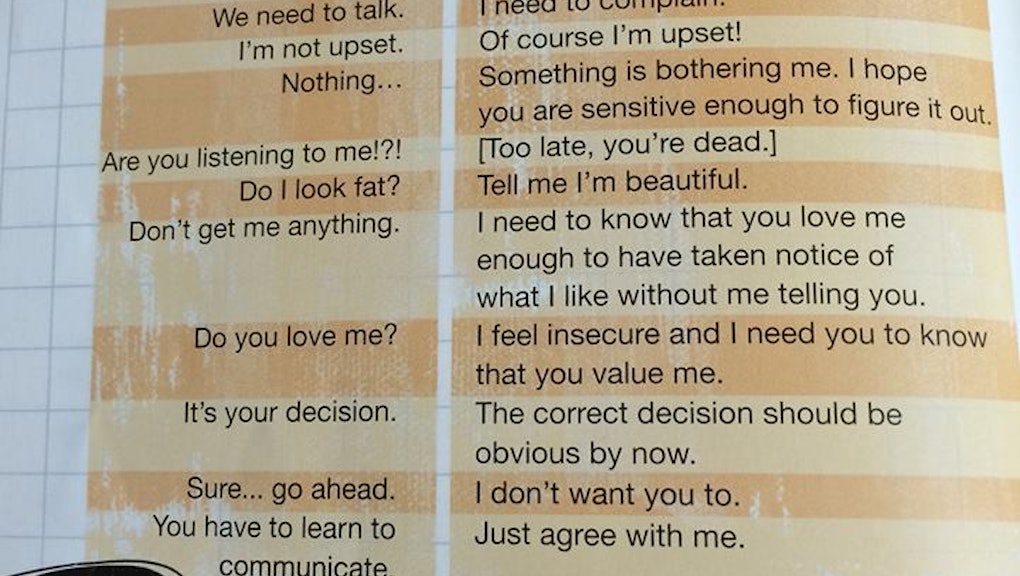 These days, it seems like teens are all but guaranteed to have some kind of terrible sex ed experience over the course of their academic career. Many will likely try to shrug it off. Others, however, will take a stand.

After sitting through a particularly bad sex ed workshop, Agatha Tan, a student living in Singapore, posted an open letter to her principal eviscerating the lesson's promotion of gender stereotypes, rape culture and bigotry.

"While sexuality education rarely manages to teach me something that I have not already learnt through past sessions or mainstream media," she wrote, "this booklet was different. From merely glancing through this booklet, I learned a simple yet important lesson: that bigotry is very much alive and it was naïve of me to think I could be safe from it even in school."

Tan was especially critical of the workshop's propagation of gender inequality. One chart, for example, contrasted what a woman says ("We need to talk.") with what the book claims she really means ("I need to complain."). She argued that these lessons — regardless of their humorous presentation — are extremely damaging. "By endorsing these stereotypes as a tolerable joke, they effectively tell students that these are acceptable views and that it's perfectly okay to adopt them," she wrote.

Just as with any stereotype, perpetuating these problematic ideas can have harmful consequences.

"[It] creates a dangerous situation in which questions like 'Does she mean yes when she says no?' become valid in the male student population's eyes," Tan said. "The guys now come to mistakenly understand that girls always mean the opposite when they say anything, including 'no.'"

The lesson was also chock-full of good, old-fashioned myths about women — or "gals," as it called them — including their fragility and neediness. "It paints girls as hopelessly dependent beings who are incapable of surviving without guys," she said.

In her post, Tan noted that one of her peers attempted to point out that the lesson was narrow in focus, and that it didn't consider LGBT or polyamorous individuals — and was shut down by the lesson's facilitators, Focus on the Family. A Christian nonprofit, Focus on the Family told the girl that "her views were not what the audience wanted to listen to and that perhaps she could remain quiet for now and bring it up with him afterwards."

In response, Vicky Ho, a spokeswoman for the nonprofit, told the Online Citizen that they're in touch "with the relevant parties" to discuss Tan's criticism. (The workshop itself is apparently based on "well-researched material by various trusted family life and relationship experts.")

Unfortunately, this isn't uncommon. Tan may live in Singapore, but the U.S. doesn't have the best track record when it comes to sex ed, either. Between comparing sexually active women to dirty candy, claiming there's no such thing as rape and forcing students to watch rabbits go at it, there seems to be no shortage of awful reproductive education stories out there.

The difference this time, however, is that a student is taking educators to task in an eloquent, intelligent and nuanced way. Judging by the response Tan has received — her Facebook post has been shared over 2,300 times so far — others are equally impressed.

And the reaction seems to be having an impact: The Straits Times is now reporting that the Singaporean Ministry of Education will be cutting its ties with Focus on the Family.

This is great news for advocates of a positive and empowering sex ed curriculum. The foundation for a healthy attitude toward sex is built during adolescence, and sex ed should exist to strengthen that, not threaten it.