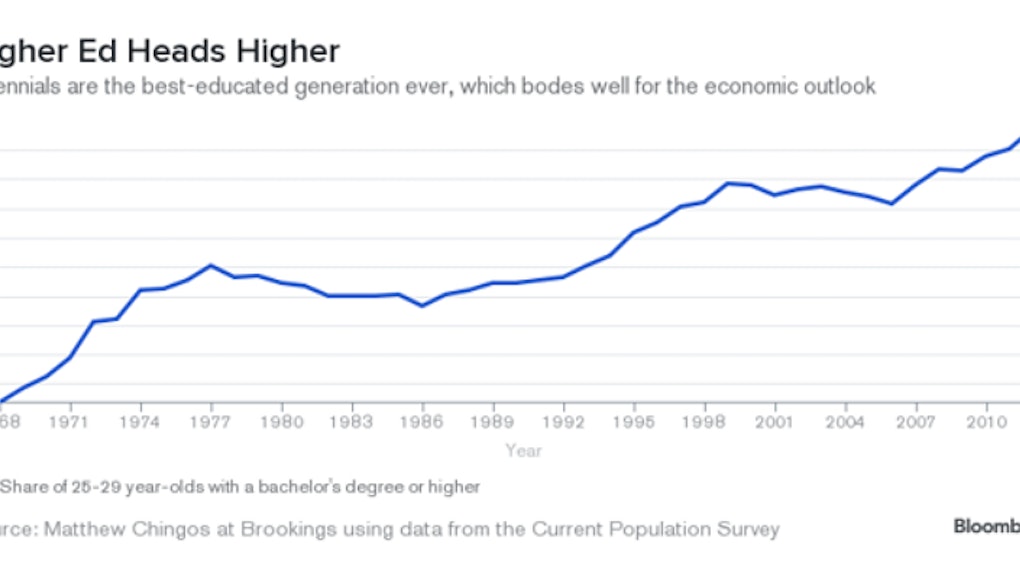 Young Americans are racking up degrees at a historically unparalleled rate, with 34% of 25-to-29-year-olds holding a bachelor's, master's, professional or doctoral diploma. This is undoubtedly good news, but the underlying reason for the uptick is troubling.

This chart, courtesy of Bloomberg, shows how the share of young people who hold a bachelor's degree or higher has risen over time:

On the face of it, the spike is difficult to understand. Higher education is getting more and more expensive, and state appropriations, which have typically been used to defray those costs, are still way below pre-recession levels. College loans are now the second-highest debt burden on Americans, after home mortgages. One would think fewer people would end up pursuing degrees, not more.

So, the question: Why are more young people than ever staying in school?

The answer is simple. It's really, really hard to find a job without at least a bachelor's degree, and it becomes much easier with an advanced degree. Bloomberg again:

The unemployment rate of college graduates ages 25 and older was 2.9% in September, compared with 5.3% for high school graduates and 8.4% for those with less than a high school diploma, according to Labor Department figures.

In August, the U.S. Bureau of Labor Statistics reported a youth unemployment rate (ages 16 to 24) of 14.3%. That's 3.4 million younger-end Millennials unsuccessfully pursuing work. This age range also happens to include two or three potential decision points — the first chance to drop out, the end of high school and the start of college. And with stats like those above, it's no surprise that young people are putting off entering the job market to pursue higher-level degrees.

How this trend will affect the future economy is more difficult to decipher. The value of a college degree continues to grow, but so too does the cost of acquiring one. As Bloomberg notes, a highly educated workforce will likely be a plus for the U.S. economy in the long run. But it will be awfully expensive in the meantime.