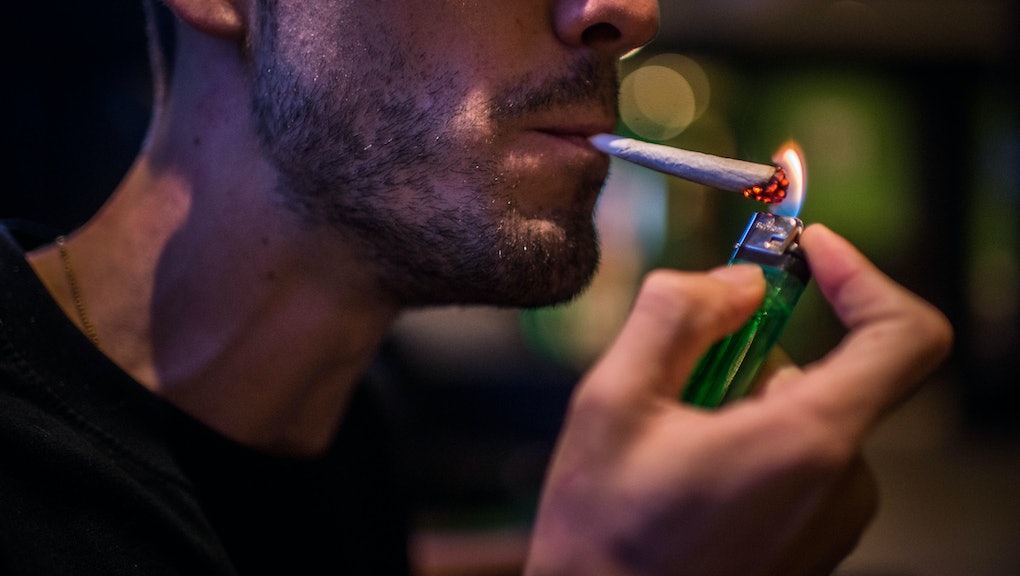 The news: This week, a huge new study was published that's being promoted as the definitive anti-marijuana study, proving marijuana is super scary and extremely detrimental to overall health.

The study, published by professor Wayne Hall of the University of Queensland Centre for Clinical Research in the October edition of Addiction, has the media in a tizzy thanks to its conclusion that habitual marijuana use is associated with a large range of adverse health effects.

Except there's one problem: And that is, there is no problem. At least, not the problem the study's claiming. Rather, it confirms some things we already knew and expands on others, but it's certainly not the crushing blow to marijuana legislation reform it's being billed as.

Hall compared 20 years of evidence starting in 1993, finding that we now know:

— Regular cannabis users have double the risk of experiencing psychotic symptoms and disorders such as schizophrenia, and the rates rise with a family history of such disorders or if the user begins in their teens.

— Adolescent cannabis users do worse in school, but there's no definitive causal connection.

— Driving under the influence of cannabis doubles the risk of a car crash, and goes up much more if alcohol was involved.

Here's a table from the report, cataloging all the negative effects Hall was able to find evidence for:

Old research, new study: It's important to understand that Hall's work is an academic review; these studies have been available for years. Long-term, regular marijuana use has some consequences, and Hall's study shows there are documented risks associated with getting high on a daily basis. But there's some big caveats.

The "addictive as heroin" comparison, for example, seems to be a total misinterpretation of the study's findings. In an interview with BBC Radio Berkshire, Hall says that the risk of marijuana addiction is less than with alcohol. Hall's explanation that marijuana could be psychologically addictive in the same manner as almost any drug, and that a few patients were severely addicted, was misquoted.

Other findings are still actively debated. The schizophrenia link may be partially the result of people with undiagnosed or latent mental disorders self-medicating. The gateway hypothesis is widely discarded by the scientific community, which now talks about gateway "behaviors" or questions its existence at all. It's pretty hard to tell whether smoking marijuana could cause cancer, because many marijuana users smoke cigarettes. While marijuana use is associated with car crashes, there's no conclusive evidence demonstrating more people are driving while impaired: In Colorado, where recreational marijuana use is legal, the vehicular accident rate is at near-historic lows.

Marijuana addiction is also not like other addictions. Psychology Today's Dr. J Wesley Boyd writes that "the vast majority of marijuana users are neither addicted nor almost addicted to cannabis," while CNN's Dr. Sanjay Gupta now admits "It is hard to make a case that it has a high potential for abuse. The physical symptoms of marijuana addiction are nothing like those of the other drugs I've mentioned [morphine, heroin or cocaine]."

Despite the fact that habitual marijuana use may be worse for us than the popular imagination, it's still not nearly as bad as basically every other popular narcotic. In 2010, Dr. David Nutt and a team of experts ranked the relative harms of various drugs and found marijuana fell far behind alcohol, heroin, crack, meth, coke, tobacco and amphetamines:

So while the study shows there are health risks to marijuana use, the media's leaving out two parts: 1) What marijuana reform has accomplished in practice, and 2) how marijuana ranks in comparison to other drugs. It's no newsflash that daily drug use isn't good for you, but decriminalization and legalization efforts that aim to promote a responsible and regulated cannabis culture have already seen great success.

What's more, cannabis law reform group CLEAR Cannabis Law Reform has written to the BMJ (formerly the British Medical Journal) complaining that Hall has a "long running association" with the National Cannabis Prevention and Information Centre, whose self-stated mission is to fight marijuana use across Australia. CLEAR UK describes the NCPIC as a "government funded propaganda organization concerned with supporting political policies."

Finally, much of the evidence Hall presents concerns the use of marijuana among teenagers, which basically no one argues should be legal. Fortunately, there's no evidence to suggest that marijuana decriminalization or legalization has resulted in higher rates of teen use. In Colorado, teen use has probably dropped since recreational marijuana became legal. Decriminalization has similarly been found to have little affect on rates of use.

Legal alcohol also has a terrifying laundry list of adverse effects on teens, but society has somehow determined we're capable of enjoying it as adults while keeping it from minors. We can do the same with weed.