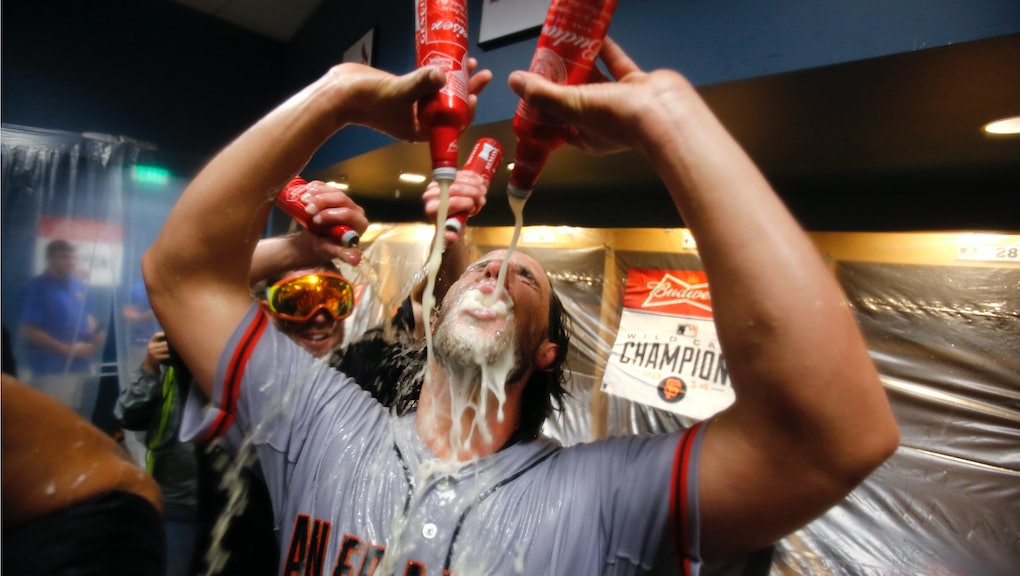 This year's Major League Baseball playoffs have been full of surprises and upsets. The Kansas City Royals, in their first playoff appearance in 29 years, could be America's team to root for after unseating the top-seeded Los Angeles Angels in the divisional series.

The American League Championship Series, which starts Friday between the Royals and the Baltimore Orioles, will surely supply more memorable moments to an already exciting playoffs. Here are a few recent highlights that you won't want to miss.

On Sept. 30, Oakland A's reliever Alberto Callaspo walked off the field after giving up the winning run in the American League wild-card game against the Kansas City Royals.

3. No moment too serious

Washington Nationals second baseman Asdrubal Cabrera got a little too up in umpire Vic Carapazza's face after he struck out in the tenth inning during a game last weekend. Cabrera was ejected for arguing balls and strikes.

Somewhere behind that sea of beer and bubbly, the Royals celebrated their sweep of the Los Angeles Angels on Sunday, which ensured they advanced to the ALCS.

6. One is the loneliest number

This is Detroit Tigers shortstop Eugenio Suarez, sitting alone in the dugout after his team was swept out of the playoffs by the Baltimore Orioles on Sunday. All Suarez had around him was the detritus of the game: used cups, gum wrappers and chewed sunflower seeds.

Los Angeles Dodgers manager Don Mattingly decided to bench outfielder Yasiel Puig, one of the most dynamic players in the entire league, for the pivotal Game 4 against the St. Louis Cardinals. Despite Puig's struggles during the series, he played a significant role in leading the Dodgers to the playoffs. Benching Puig has provoked plenty of questions, many of which will linger into the offseason.

On Tuesday, Puig was subjected to a pinch-running role in the ninth inning, which left him watching the Cardinals celebrate as they advanced to the NLCS.

If the rest of the playoffs are anything like the lead-up, we could be in for an explosive league championship series and World Series.