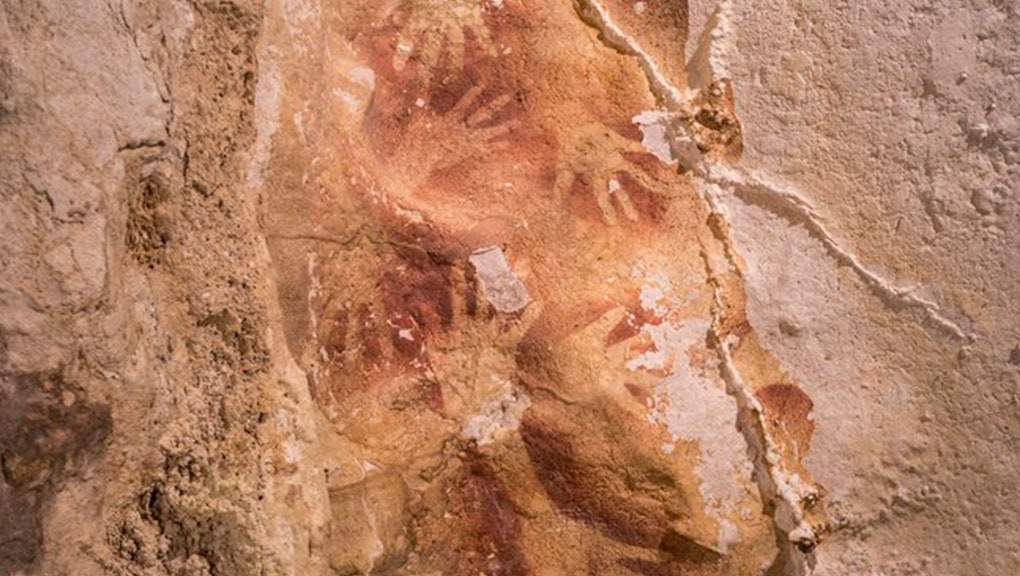 Archaeologists' Latest Discovery May Change What We Know About Art

The news: Archaeologists have long thought human paintings originated from Europe, where the earliest known cave paintings were created 40,000 years ago. But a new discovery has turned this theory on its head and could transform what we think about the origin of art.

According to a paper published Wednesday in the journal Nature, researchers in Sulawesi, Indonesia, have found what may be the oldest cave paintings discovered yet. Much like their European counterparts, some of the 14 paintings featured the use of hand prints.

Other depictions have turned out to be the earliest discovered instances of figurative art (drawings that represent something else). These paintings, mostly consisting of animals, date back to at least 39,900 years ago.

This is a game-changing discovery. While the findings are interesting on their own, they have the potential to significantly alter how we view the history of art. While previous studies have suggested the practice of cave painting spread from Europe, this new paper argues there might have been a different origin.

"It was previously thought that Western Europe was the centerpiece of a 'symbolic explosion' in early human artistic activity, such as cave painting and other forms of image making, including figurative art, around 40,000 years ago," study leader Maxime Aubert, an archaeologist and geochemist at Australia's Griffith University, wrote in a statement.

"However, our findings show that cave art was made at opposite ends of the Pleistocene Eurasian world at about the same time, suggesting these practices have deeper origins — perhaps in Africa before our species left this continent and spread across the globe."

Until now, Europe was thought to have the oldest cave painting, but since archaeologists have only just scratched the surface of these in Asia, there's no telling what else they might find and how old these findings could be.

This discovery will hopefully spur more research. The Nature paper shows that there are still big gaps in our understanding of human history — and that our assumptions will continue to be challenged, especially in areas of the world that have not received enough attention and funding.

The findings "stress the great relevance of Asia, and especially southeast Asia, for the study of human evolution," said Wil Roebroeks, who wrote a comment for the study. "Compared with Europe, Asia has seen little fieldwork, and new finds will keep on challenging what we think we know about human evolution."