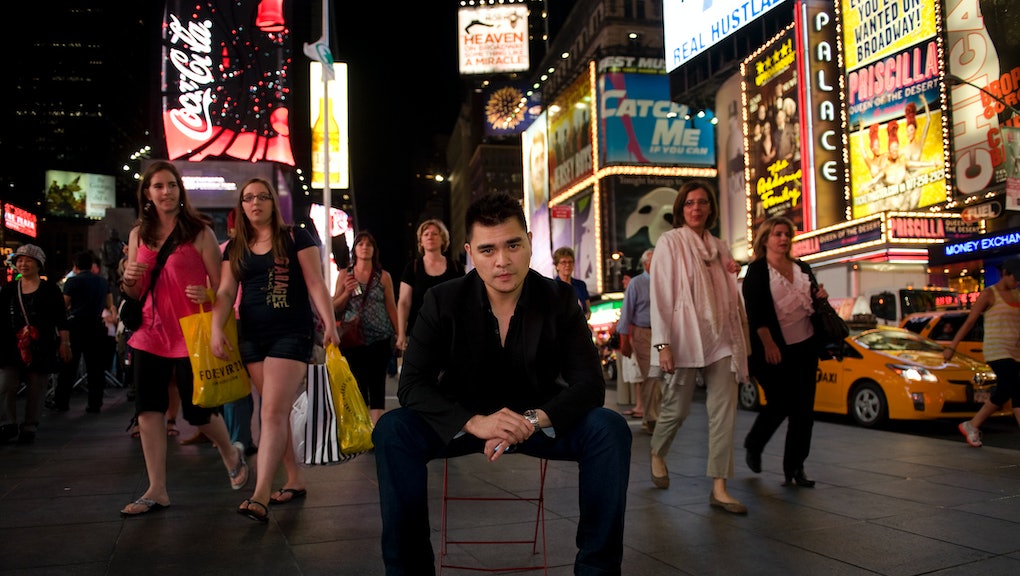 One of the most difficult things about having privilege is giving it up, but that's exactly what Pulitzer Prize winning journalist Jose Antonio Vargas did in 2011. That year, the movement to pass the DREAM Act, a bill that would allow immigrants who came to the U.S. as minors and lack documents to achieve residency, was reaching its height. Vargas decided to put himself on the front lines by announcing he was in the country illegally in a moving story for the New York Times Magazine.

"On the surface," Vargas confessed in the article, "I've created a good life. I've lived the American dream. But I am still an undocumented immigrant. And that means living a different kind of reality."

Now, Vargas is making waves once again with the digital release of Documented, a documentary that aired on CNN earlier this year and explores his journey from the Philippines to America through the lens of the ongoing immigration reform debate. The whispers that Documented could garner an Oscar nomination for Best Documentary Feature are already starting up.

If Documented finds its way into the spotlight this awards season, it could have a powerful effect on the way in which Americans approach the topic of immigration. Although immigration reform continues to make headlines in Washington, a 2014 Pew Research Center survey found that immigration reform remains a relatively low priority for voters. Films like Documented could help to close the gap between public policy and public passion for the rights of people who are in the country without legal permission.

In a particularly moving scene early in the film, Vargas outs himself as "undocumented" in front of a journalism class at his old high school. Throughout his work, he leverages the fact that he is a successful Filipino professional in order to challenge stereotypes about where immigrants without permission come from and what sort of work they do. According to the Department of Homeland Security, for example, 6.7 million of the 11.4 million come from Mexico, but sizable percentages come from Asia and even Europe. As Vargas tells the high school class, "We're not who you think we are."

Rather than positioning himself as the exemplary success story by which other immigrants should be judged, Vargas uses his platform both on- and off-screen to advocate for the rights of all immigrants without permission. When he first saw young supporters of the DREAM Act coming out with the slogan "undocumented, unafraid, and unapologetic," Vargas encountered his own fears of losing his privilege: "As I watched these young people, I felt like a coward." Vargas proceeds to come out as "undocumented" in the New York Times Magazine, fully cognizant of the effect this choice will have on his career and his ability to remain in this country unhindered.

"I wanted to write the article not only for myself," he recalled, "but for countless others who couldn't write it."

This is an attitude that Vargas has carried with him throughout his travels for his nationwide Define American campaign which seeks to "shift the conversation around immigration, identity, and citizenship in America." When he was detained at the Texas border this past summer, he was released because he did not pose a "security threat." But as he told the New York Times: "I would argue that the 11 million undocumented immigrants in this country are not a threat either."

While Vargas uses his own surprising level of socioeconomic privilege to draw attention to the cause of immigration reform, then, he refuses to reinforce paternalistic stereotypes about "good immigrants" and "bad immigrants." In Documented, for example, a white woman at a Mitt Romney rally tells him that "we want the highly intelligent immigrants here," but Vargas deconstructs her assumptions, pointing out that well-connected, white immigrants without legal permission are much more likely to find a pathway to citizenship than people like himself.

The remainder of Documented follows Vargas as he deals with the consequences of his coming out, ranging from a blistering interview with Lou Dobbs on CNN to the loss of his driver's license to an emotional re-connection with his mother, whom Vargas had not seen since he left the Philippines at age 12. The film culminates in Vargas' 2013 testimony in front of a hearing for the Senate Judiciary Committee.

Documented couldn't come at a more important time in U.S. politics. If recent poll numbers are any indication, the debate over immigration may be taking a turn for the worse. In 2013, as Pew Research Center reports, Americans emphasized the creation of pathways to citizenship and increased border security and enforcement as more or less equal priorities in immigration policy. But new data released last month shows that Americans, particularly white Americans, are increasing their focus on border security and enforcement.

If Documented gets more widespread exposure later this year, it could help stem the tide of anti-immigrant sentiment in the United States. The question that he asked the Senate Judiciary Committee deserves to be asked of every American with papers: "What do you want to do with us?"