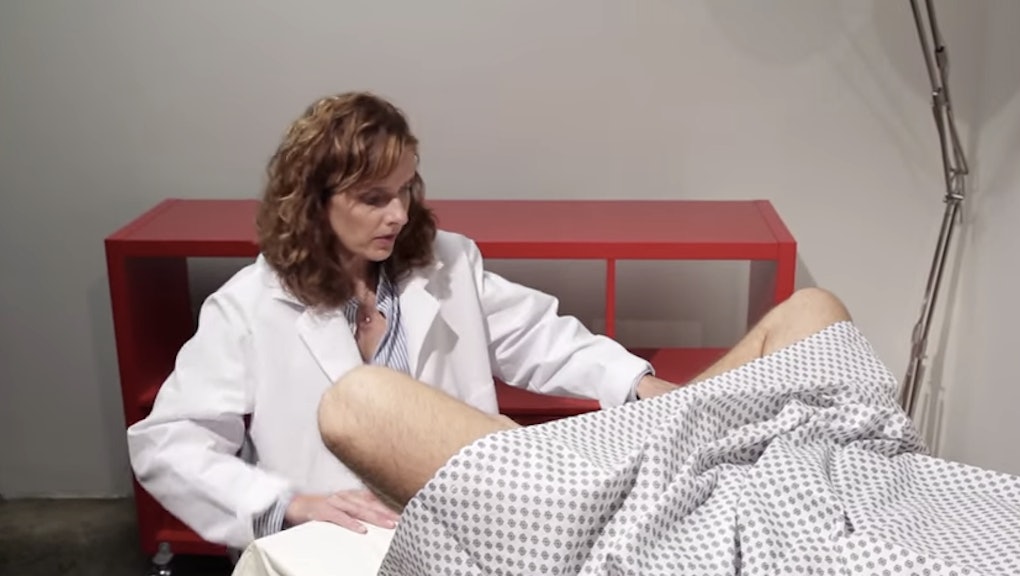 If Buying Condoms Was Like Buying Birth Control, Here's How Frustrated Men Would Feel

There is no standard form of birth control for men that mimics the cultural stigmas — or cost — associated with options for women. BuzzFeed highlights this hypocrisy in a new video, which shows how society places the burden of birth control on women rather than men by flipping the script.

"If Buying Condoms Was Like Buying Birth Control" depicts a topsy-turvy world where men are entirely responsible for obtaining birth control, from the "awkward talk" with the dad to a late night make-out session with the girlfriend. This intimate moment abruptly ends, however, when the guy hasn't "refilled" his condom prescription and the girlfriend chides him for not being "responsible with the birth control."

"Maybe ... you ... could take responsibility for the birth control," the guy stammers, to which the girlfriend, mimicking a refrain uttered by far too many men notes: "But, baby, then it won't feel as good."

While somewhat silly, the video makes valid points about how birth control works for American women. The justification process alone — to parents, the medical establishment and to one's partner — is exhausting and intimidating. It is also a costly process. As the medical assistant notes in the video, upon the guy's admission that he doesn't have health insurance, "That will be $150. I hope it's worth it."

That women have to justify the need for birth control at all reveals the wild, sexist hypocrisy pervading American culture: On one hand, women are responsible for "taking care of the situation," while simultaneously fighting all the legal and societal preventative measures — from gawking comments about one's sexual habits to the increasingly limited and cost prohibitive access thanks to Congress and the courts — in place that make it frustratingly difficult to procure said contraceptives.

Maybe all those women "too tired" to have sex are just worn out from the bureaucratic nightmare it takes to engage in intercourse safely.

Now, if buying female birth control was like buying condoms, there would be no need to "buy" at all. Women simply would go to any clinic or school nurse's office or nightclub and reach her hand into a basket for a "free" tablet.

On the other hand, maybe it is a good thing birth control is so, well, controlled. Everyone knows, ultimately, women can't really be trusted with their own bodies. Who knows, we might just eat all the pills at once.