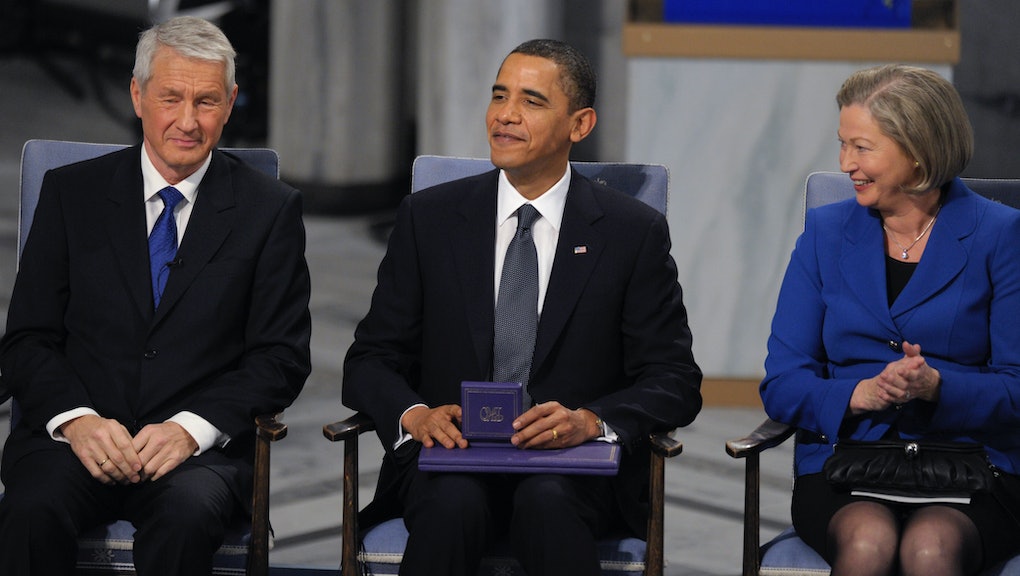 Hey! We wanted to drop you a line to see how you're doing. You haven't returned our calls for about ... hmmm ... five years or so. What gives?

We'll be blunt: Things between us haven't been so great lately, and frankly it's you, not us.

Do you remember what we told you, on that brisk autumn day, when we gave you our most treasured possession? "We are not awarding the prize for what may happen in the future, but for what he has done in the previous year," we said.

We were talking about your aspirations for nuclear disarmament, climate change, the Israeli-Palestinian conflict, religious persecution and the fight against poverty and disease. We were talking about the vision you laid out in Cairo, where you extended an olive branch to the Muslim world after a decade of war.

That man, in Cairo, was the man we fell in love with. Barack Obama, the peace-loving, warmhearted presidential candidate, the one who whispered sweet nothings of "hope" and "change" in the ears of his adoring voters. There was so much to adore: You promised to end America's reckless warmongering, roll back its disregard for human rights and maybe even go a few years without blowing something up.

It was magical, for a time. You, America's first black president, eager to pull back the excesses of the Bush administration. You made a vow: "Clear-eyed, we can understand that there will be war, and still strive for peace."

But, my how you've changed.

We can hardly count the broken promises.

You told us your fling with Iraq was "winding down." But just last month, we found you in bed with the military-industrial complex once again. "Baby, it's just 'limited strikes,'" you said. But a billion dollars and more than a few guided missiles later, you've blown holes in places other than Sinjar — like our shattered hearts.

If it were just Iraq, we might be able to overlook it. You've bombed an astonishing seven majority-Muslim countries. That's more than one a year!

You used your acceptance speech to make a case for "just" war. And hey, you did it! The U.S. hasn't declared war in years. Yet here you are, dropping missiles and flying drones over every scrap of land in the Middle East.

You told us that America would aspire to the "law of love" — but mainly, you've set the law to work justifying the assassination of its citizens without due process.

Your administration was supposed to ensure that "human rights and dignity are advanced over time." But you've fallen in with a bad crowd. Nerve-gas-dealing Bashar Assad, the man who's spent years slaughtering his own citizens to stymie a civil war, is now your implicit ally. You've begun to warm to the new military regime in Egypt (which, by the way, mass-executes people). That's not even counting all those cartoonishly evil dictators you continue to back, or your continued interference in South American politics.

You told us you'd make America a beacon for human rights. Yeah. OK.

You talked a lot about the "continued expansion of our moral imagination," but there's only one thing that is really expanding in America: the security state. Call us crazy, but Nobel Peace Prize winners don't normally hound whistleblowers or spy on their citizens so badly that this year the U.S. earned 46th place in freedom of the press, "after El Salvador, after Papua New Guinea, and Romania."

Barack, you had so much promise. And while we love the man you said you'd be, you haven't lived up to expectations.

That's why we'd like to you to return your Nobel Prize. We'll come by this Sunday to pick it up. Don't worry, it won't be awkward: We'll just wait until you're out golfing.