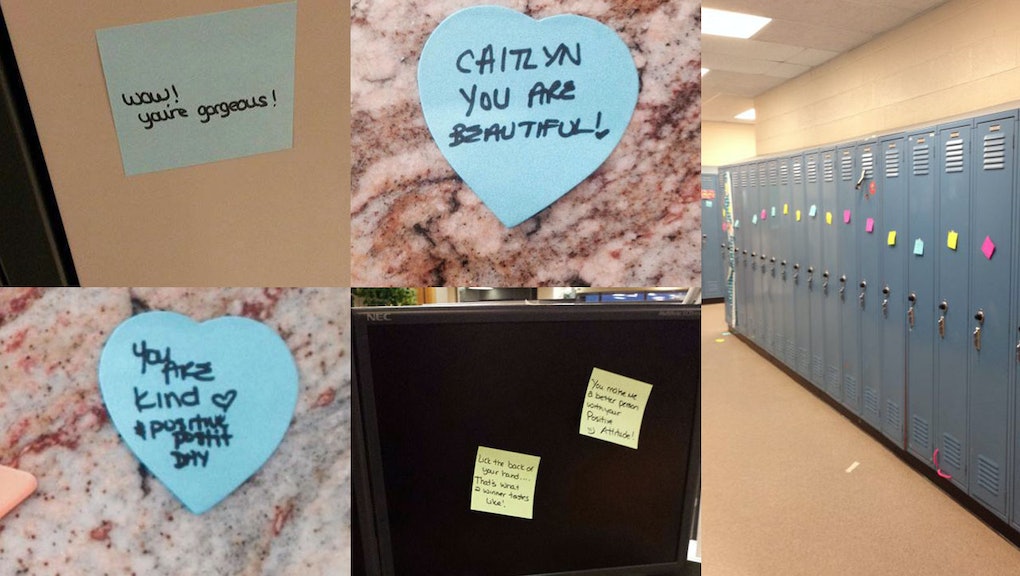 The news: Bullying is fine, and God forbid someone tries to speak out against it in a positive, creative way.

That's the message that a school in Airdrie, Canada, sent out this week when it reprimanded a student for trying to help others feel better about themselves.

Caitlin Prater-Haacke, an 11th-grader at George McDougall High School, was bullied last month when someone broke into her locker and used her iPad to post a message on her Facebook account, telling her to kill herself. Though she was upset by the incident, Prater-Haacke decided to use her experience to help others.

On Monday, Prater-Haacke wrote positive messages on 850 Post-it notes — saying such things as "You're awesome" and "You're beautiful" — and posted them on every single locker in the school. "Bullying is not necessarily addressed, and people get really down about it, I wanted to do something positive — it was about due time," Prater-Haacke told the Calgary Sun.

But the school had other, lesser concerns. Despite Prater-Haacke's good intentions, and the fact that other students enjoyed receiving these unexpected, encouraging notes, the school reprimanded her for — wait for it — littering.

According to Nicole Haacke, Caitlin's mom, the school did nothing when she brought up her concerns over the bullying incident. But when her daughter did something as innocuous as putting up positive Post-its, she was met with swift action, and was pulled out of her classroom and yelled at by a teacher.

"I don't understand that when my kid is bullied, nothing happens, but when she tries to do something positive, she is punished," Haacke told the Airdrie Echo.

Thankfully, others didn't see it that way. While George McDougall High School's response is certainly disappointing, Prater-Haacke's creative stand against bullying has struck a chord with others. After her story went viral, the Airdrie city council voted to make Thursday the city's official Positive Post-It Day, encouraging students and residents to leave uplifting notes for each other.

"I think it's a great initiative and I really commend [Caitlin] for continuing to do the right thing," said Mayor Peter Brown said.

The movement ended up gaining momentum online, and Thursday #positivepostit was a trending term on Twitter in Canada:

"We wanted to make this day where we could all do it, we could all show how much we really care for each other," Prater-Haacke told CTV News. "And that bullying happens, but we want to try and fix it."

Too bad her school was too worried about the litter to realize this simple, powerful message.