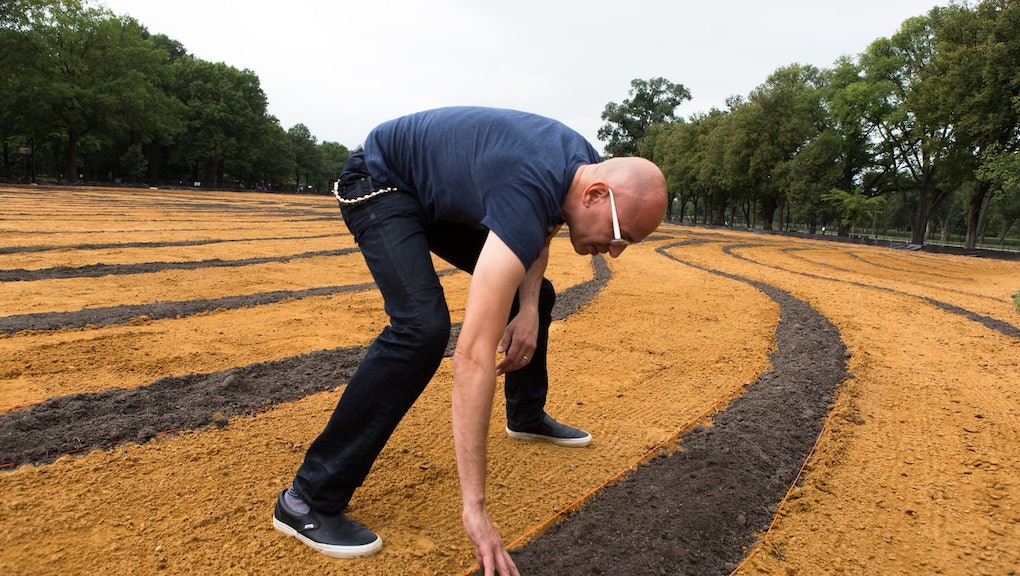 It's a testament to America's diversity as we know it today.

Entitled "Out of Many, One" — the English translation of the Latin e pluribus unum on the seal of the United States — the massive portrait is the work of artist Jorge Rodríguez-Gerada. Composed of 2,000 tons of sand and 800 tons of topsoil, it spans over six acres and took four weeks to complete. The face itself is a composite image created from photographs of 50 young men from different racial backgrounds.

"[It] represents the celebration of diversity," Rodríguez-Gerada told PBS Newshour. "And I think that diversity is what made — is one of the things that makes the nation so great."

The portrait's intrigue stems partly from the different kinds of access it allows. It looks much different close up than it does from the sky — as NPR points out, it looks like a "field under construction" from ground level. When you look at it from above, however — either flying in a plane or visiting the Washington Monument — the face begins to take shape.

"Art is often the domain of the privileged, but here, the 'lucky few' — those who make it 'to the top' — will not be the wealthy but those who manage to score the free admission tickets for access to the monument," the Washington Post notes.

The National Portrait Gallery, which is also involved with the work, wanted to depart from a traditional museum setting and expand what portraiture can do as an art form, the Washington Post. It will be on display for about a month — it went up at the end of September — and will remain there until natural elements take their toll.

That the project came together at all is somewhat of a revelation. The National Mall is notoriously complex to gain access to, but David Ward, a senior historian at the National Portrait Gallery, told the Washington Post the proposal only took a couple of months to materialize.

According to PBS Newshour, Rodríguez-Gerada has also dabbled in not-so-legal work; he used to be involved with Artfux, a group that "[parodied] ads and [hijacked] billboards to drastically alter their messages."

But with "Out of Many, One," which is similar in vein to the massive portrait of President Barack Obama that he created in Barcelona in 2008, Rodríguez-Gerada has created a meaningful symbol of American diversity smack dab in the heart of its capital.

It reflects a growing trend, too. Millennials, more than perhaps any other age group, are living up to the promise of an American "melting pot." According to the Pew Research Center, young people — who are represented in the portrait, as the photos Rodríguez-Gerada took are all of men aged 18 to 25 — are the most racially diverse generation today. Some 43% of adult millennials are non-white, more than any other previous generation.

Much like National Geographic's imagining of what Americans will look like in 2050 — which is, in a phrase, beautifully diverse — Rodríguez-Gerada's massive portrait is both symbolic and stunning. It won't be on the National Mall forever, but its message will be a part of the American experience for decades to come.