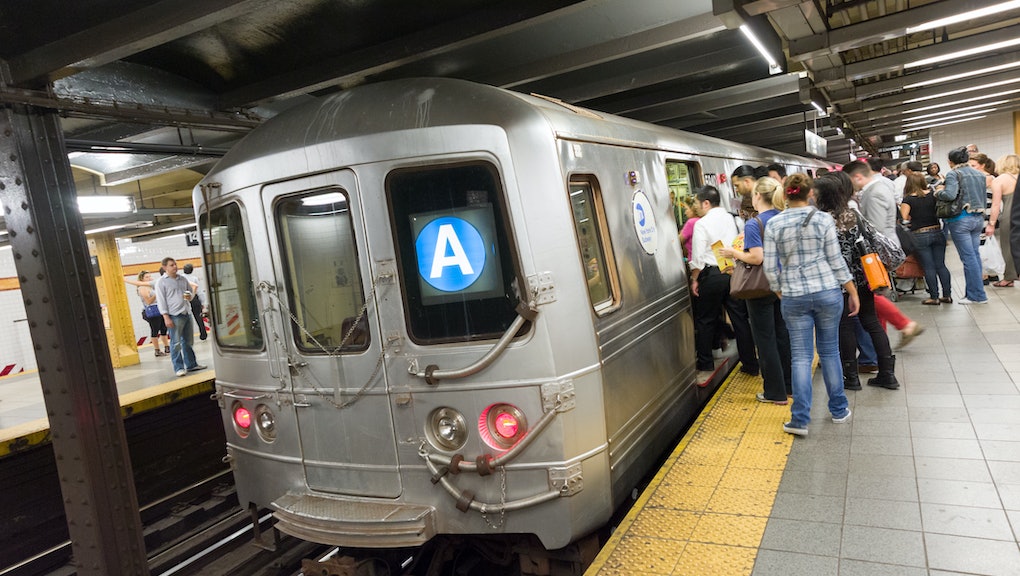 The news: In what's probably one of the grossest stories you'll read this week, the New York Post recently ran a flattering Sunday profile on New Yorker and 48-year-old subway pick-up artist Brian Robinson. Robinson has written a book titled How to Meet Women on the Subway and claims to have gone on 500 dates since adopting a train-centric dating strategy in 1999.

His motto? "If you see some pretty young thing, say something."

Robin says his "time-tested approach is to pretend he's lost and ask for directions," or, you know, lying. The New York Post observed that Robinson's strategy of trying to lure women into dates under false pretenses seemed to work, in spite of its overall distastefulness:

The trick, he says, is to have a quick conversation where you express interest in who she is and what she does — not trying to overtly hit on her. Then use the deadlines of the subway as an advantage: "I have to get off at the next stop and would love to continue this conversation. Can I get your e-mail address?"

Why this is really, really gross: What's left completely unsaid was how the women felt about these encounters. Were they just trying to get him out of their faces? How many of those numbers were fake? How many women does Robinson typically make feel deeply uncomfortable in the process? How do they feel when they learn he lured them under false pretenses?

Robinson told the New York Post that a woman once told him "I don't have time for this" before pulling out a bottle of mace. While the subterranean Lothario narrowly escaped having his eyes filled with pepper spray, his intended target had good reason to be wary of his unwelcome advances: Harassment of women in public spaces is startlingly common. Mic's Julianne Ross reports that some 41% of women have experienced some form of aggressive harassment such as "unwanted touching, following, flashing or being forced to do something sexual by their assailant." While Robinson doesn't appear to have crossed that line, his meticulously honed subway strategy is creepy and potentially threatening.

Using public transit as a way to pick up women is particularly pernicious, because women are continually at risk in these poorly policed, confined places. A 2007 study found that a stunning 63% of New Yorkers reported some kind of harassment on the subway, while another 10% had been assaulted. Of observed victims, 93% were women.

How are women supposed to tell the difference between Robinson and a potentially dangerous sex offender? Unfortunately, they can't. What's more, even Robinson's behavior, which the Post portrays as harmless, may in and of itself constitute a form of sexual harassment. As the Huffington Post's Lauren Messervey writes on men using similar pick-up strategies:

I have been approached by these people before ... I will say from the very bottom of my heart that there are few things I find more irritating than being stopped while I am on a mission to be told, "I'm sorry, I just had to stop you. You're so beautiful. Can I take you out for a drink?" I'm not irritated by the statement, mind you. I'm irritated by its motive, because unbeknownst to the cunning PUAs, I know what they're doing ... I'm disgusted because as a woman, I like to be treated as a person.

Why you should care: It would be nice if guys didn't rely on creepy tricks to fool women into sleeping with them, but it would also be nice not to lionize the person repeatedly acting like that as a "railway Romeo."

Anti-harassment activist Nicola Briggs, famous for forcing a subway attacker to stay on the train until he was arrested, writes: "We aren't the ones who need to feel embarrassed — it's sexual predators who need to feel the shame and public scrutiny from their unacceptable behavior." Unfortunately, the New York Post just tried to make Robinson look like some kind of Casanova. He's not, and by promoting his sure-to-be terrible book on how to make unwanted advances on the subway, the New York Post may help inspire a new generation of subway-riding creeps to take up his mantle.