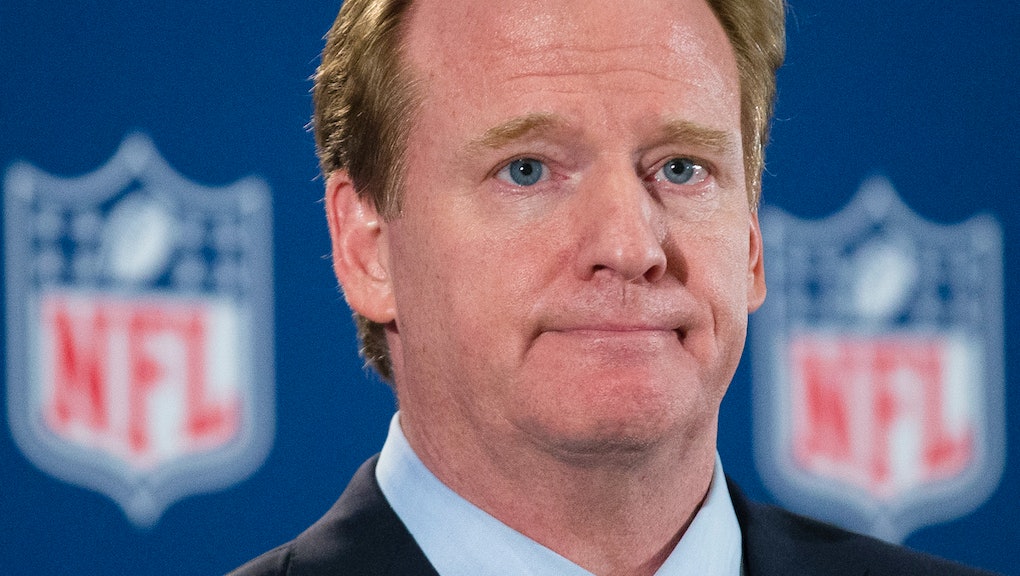 Football Will No Longer Be America's Favorite Pastime by 2050

The NFL is a national obsession, generating an estimated $9.5 billion in annual revenue. Last year, 34 of the 35 most-watched programs on TV were football games, one of the last vestiges of monoculture in a fragmenting media landscape. It's estimated that 32 million Americans play fantasy football, spending an average of $467 per person every year.

Football permeates our society in so many ways, it's hard to imagine an America where the NFL isn't king.

Alas, all empires fall. Here are eight reasons why football's comedown may arrive sooner than you think.

In 1950, America's most popular sports were baseball, boxing and horse racing. In the decades since, the "four major sports" — baseball, basketball, football and hockey — have driven the mainstream sports conversation. History shows that America's sports agenda is always in flux. Just because one sport is dominant today doesn't mean it will remain on top indefinitely. The only constant is that tastes, preferences and sensibilities change.

The head-injury crisis is shrinking the talent pool.

Last month, it was revealed 76 of the 79 deceased football players who donated their brains to research showed evidence of chronic traumatic encephalopathy. While the NFL has gone to extraordinary lengths to contain the crisis, the link between football and brain trauma is now beyond dispute. It's not unlike the research into dementia pugilistica, once known as "punch-drunk syndrome," which undercut boxing's supply line and helped marginalize a sport that once commanded America's attention.

As the scientific evidence mounts against football, it stands to reason that fewer parents will allow their children to play a sport that all but guarantees traumatic brain injury. The trickle-down effect can already be seen anecdotally: Just last month, one of the nation's top high school wide-receiver prospects made headlines by opting for soccer over football.

Change is coming and the NFL's core fans won't like it.

Let's be real: Fans are drawn to football for the bone-crunching hits and high-speed mayhem. But the efforts of the league to clean up the game have softened the violence central to the NFL's appeal. The players certainly aren't behind it.

The best guess is the league will one day be forced to abandon the hard-shell helmets, which are essentially used as weapons, in favor of the soft headgear worn by rugby players that demands tacklers be far more careful about how they hit. Will the NFL's die-hard fans stick by a sport that's vastly different, in rules and aesthetics, from the game they fell in love with?

The league is overextending itself.

Football, once exclusively the province of Sundays, now is broadcast on Mondays, Saturdays and (controversially) Thursdays. The league, with the goal of increasing annual revenue to $25 billion by 2027, has stopped at nothing to maximize all possible streams. Mark Cuban, the billionaire entrepreneur who owns the NBA's Dallas Mavericks, believes greed will be its downfall.

"I think the NFL is 10 years away from an implosion," Cuban said in February of the NFL's oversaturation. "When pigs get fat, hogs get slaughtered. And they're getting hoggy. When you try to take it too far, people turn the other way. I'm just telling you, when you got a good thing and you get greedy, it always, always, always, always, always turns against you."

The NFL is losing traction among millennials ...

A recent study indicated the NFL's brand is in crisis even as its bottom line soars, with 4 out of 5 millennials — who will soon be the most important consumer demographic — saying they were less trusting of the NFL than of the NBA, MLB, NHL or NASCAR. Among the survey's more damning findings: 48% of respondents identified the NFL as a "sleazy" organization (including 61% of Millennials) and 54% believe the NFL is anti-gay.

"Eventually, as trust erodes, it will impact the bottom line and you have to be concerned about whether the NFL will lose relevancy to up-and-coming sports like soccer," said brand marketing researcher Jeetendr Sehdev, who conducted the survey. "The key finding for us is that transparency is the cost of doing business now for most organizations, especially among Millennials, and that's where the problem lies."

... which has created an opening for alternatives.

In 2012, the ESPN Sports Poll Annual Report revealed soccer was America's second-most popular sport for those aged 12 to 24, ahead of NBA, MLB and college football. That study found Lionel Messi (16th), David Beckham (20th) and Cristiano Ronaldo (24th) rated among the nation's 50 most popular athletes.

That would have been unthinkable during the mid-1990s, when European matches could only be found on pay-per-view in the U.S., if at all. Bit by bit, the barriers to access top-flight soccer have fallen, first with introduction of Fox Sports World (which became Fox Soccer Channel) and later, even more importantly, with the birth of YouTube. Today, more English Premier League matches are available in the U.S. than in the U.K. As American culture becomes more globalized due to technology and population trends, the signature sports exceptionalism that marginalized soccer for generations moves swiftly toward obsolescence.

The demographic trends that augur a challenge of the NFL's dominance aren't just generational. Census projections indicate that non-Hispanic white Americans will no longer be in the majority by 2043. Hispanics, who currently make up 17% of the population, will more than double in absolute number and comprise nearly 1 in 3 residents.

That portends a major rise in soccer's visibility: An ABC News/Washington Post poll ahead of this year's World Cup found that 45% of Hispanics describe themselves as soccer fans, compared to one-quarter of all other adults.

Football's image problem is getting worse, not better.

From the grassroots level (see: the Sayreville, New Jersey, hazing scandal) to the NFL's incomprehensibly tone-deaf response to its domestic violence epidemic, it's been an annus horribilis for football on a public relations front. So far, the bad press hasn't affected its bottom line, but can that invulnerability last forever?

"The consensus is that the NFL brand is durable enough to withstand any PR disaster, but it really is in crisis from a consumer-perception standpoint," Sehdev said. "What we're really seeing are issues when it comes to trust. There's a lack of openness [related to concussions], a lack of acceptance [related to race and sexual orientation], a lack of compassion [respondents found the NFL six times less compassionate than MLB or MLS]."

The NFL isn't going anywhere, but its days as America's singular obsession are numbered.